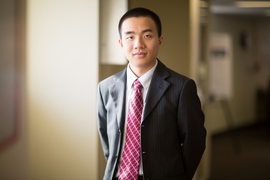 Caption:
“I hope to embody the [Buddhist] values of compassion, mindfulness, and understanding in everything I do,” says Võ Tiến Phong, MIT’s newest Marshall Scholar.
Credits:
Photo: Bryce Vickmark

MIT senior Võ Tiến Phong, from York, Pennsylvania, has been awarded a Marshall Scholarship to attend a university in the United Kingdom. Established in 1953, the Marshall Scholarship is granted to up to 40 American students each year. The scholarship finances graduate education at a U.K. academic institution and is open to talented students in all fields of study.

“I am honored to be given the opportunity to join this distinctive community,” says Võ. “The collective energy of this distinguished group of scholars dedicated to knowledge, justice, and humanity will broaden my perspective of the world and our place within it.”

Võ, who is double-majoring in physics and mathematics at MIT, will spend the next year pursuing an MPhil in physics at Cambridge University. He then plans to return to the U.S. to earn a PhD in physics. His ultimate goal is to become a professor of theoretical physics while also transforming the way physics is taught in the U.S. and internationally. Võ is particularly interested in research involving theoretical condensed matter physics.

Born in Vietnam, Võ emigrated to the U.S. with his family when he was in middle school. He arrived without speaking English and struggled through his first few years in American classrooms. In eighth grade, he was inspired by a gifted teacher who recognized his academic promise and encouraged him to pursue physics. A first-generation student, Võ entered MIT as a Gates Millennium Scholar.

During the summer of his freshman year, Võ joined Professor Emilia Morosan’s research group at Rice University as part of the National Science Foundation’s Research Experience for Undergraduates (REU). At MIT, Võ has worked with MacArthur Fellow and Professor Marin Soljačić in the department of physics, and with Professor Raymond Ahsoori’s research group. Võ is currently conducting research with Professor Leonid Levitov, examining the use of quantum mechanical calculations to study electron flows. “I am very pleased to learn that Phong was named a Marshall Scholar,” Levitov says. “It is a distinction that is well-deserved.”

In addition to being a dedicated scholar of theoretical physics, Võ is passionate about teaching and mentorship, and is determined to help reform STEM education. He has taught in various capacities at MIT, including with MIT’s Education Studies Program, which allows college students to create and teach courses for high school and middle school students. Võ also teaches physics and math as a teaching assistant in MIT’s Experimental Study Group, a freshman learning community.

Võ’s approach to teaching is deeply rooted in his Buddhist religion and commitment to volunteerism. As a resident of MIT’s International House (iHouse), he is passionate about international development projects and has served as a teaching assistant and associate advisor. For the past two years, Võ has led the MIT Buddhist Students Club, where he promotes the message of mindfulness and compassion on campus. During visits to his home state of Pennsylvania, he works with the state-wide Vietnamese Buddhist Association to provide help with religious rituals during celebrations. “I hope to embody the [Buddhist] values of compassion, mindfulness, and understanding in everything I do,” Võ says.

At MIT, Võ re-established and leads the campus-based Gates Millennium Scholars organization, where he works to provide other scholars from disadvantaged backgrounds with professional opportunities and academic support. The group also engages in outreach and mentorship to local low-income and first-generation high school students. Kimberly Benard, assistant director for Global Education and Career Development Distinguished Fellowships, says, “Phong represents the very best of MIT through his leadership, scholarship, and compassion. His vision includes not only answering important scientific questions but also making physics education more accessible in places such as his home country of Vietnam."