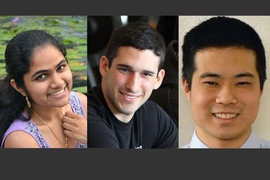 Three MIT nominees — seniors Elliot Akama-Garren and Anisha Gururaj, and alumnus Noam Angrist ’13 — are among the 32 American recipients selected this weekend as Rhodes Scholars. Each will pursue graduate studies next year at Oxford University.

This year’s three Rhodes Scholars from MIT tie the Institute’s 2009 record for the most recipients in a single year. Akama-Garren, Gururaj, and Angrist bring to 50 the number of MIT winners of the prestigious international scholarships since they were first awarded to Americans in 1904.

Elliot Akama-Garren, from Palo Alto, Calif., is an MIT senior majoring in biology. As a Rhodes Scholar, Akama-Garren plans to pursue an MSc in integrated immunology at Oxford before returning to the U.S. to pursue an MD-PhD degree. He hopes to pursue a career in academic medicine — specifically, studying the immune system to find improved treatments for a range of diseases.

Akama-Garren started conducting immunology research at Stanford University as a high school student, ultimately becoming second author on a research paper. During his time at MIT, Akama-Garren has continued work in this field, with research at the Harvard Stem Cell Institute, MIT’s Koch Institute for Integrative Cancer Research, and at Massachusetts General Hospital. In recognition of his work, Akama-Garren was honored with this year’s Thomas J. Bardos Award for Undergraduate Students, awarded by the American Association for Cancer Research.

Since his freshman year, Akama-Garren has been an undergraduate researcher in the laboratory of Tyler Jacks, the David H. Koch Professor of Biology and director of the Koch Institute, where he has studied the potential therapeutic effectiveness of T cells in suppressing lung cancer. This work has resulted in two research papers that are currently under review for publication.

Akama-Garren has served for the last three years as editor-in-chief of the MIT Undergraduate Research Journal. Outside of the laboratory, he is president and co-captain of MIT’s ice hockey team. As team president, Akama-Garren organized a fundraiser game with the Israeli national ice hockey team that attracted more than 800 fans.

“Elliot is a serious thinker who is interested in ideas rather than glory,” says Kim Benard, assistant director of distinguished fellowships in MIT Global Education and Career Development. “In addition to his exemplary academic record, Elliot has been a pivotal member of the MIT hockey team and a dedicated volunteer at Harvard Square Homeless Shelter. He exudes brilliance with compassion.”

A native of Chesterfield, Mo., Anisha Gururaj is a senior majoring in chemical-biological engineering. As a Rhodes Scholar, she plans to pursue two degrees from Oxford: an MSc in engineering science research, with a focus in bioengineering, and a master’s in public policy. Ultimately, she hopes to build a career developing affordable biomedical devices for use in both the developed and the developing world.

For the past two years, Gururaj has conducted research at MIT’s Little Devices Lab, where she has worked on individualized medical devices that users can assemble themselves. This past summer, she conducted work at the Universidad del Desarollo in Chile to investigate how diagnostic kits created by the Little Devices Lab can be used in rural settings.

Under the supervision of Michael Yaffe, the David H. Koch Professor of Biology and Biological Engineering at MIT, Gururaj co-founded a project to design a low-cost, nonelectric fluid warmer for military trauma victims. During her time at the Institute, Gururaj has also conducted research in the MIT laboratory of Robert Langer, the David H. Koch Institute Professor, and at the National University of Singapore through the Singapore-MIT Alliance for Research and Technology.

Gururaj’s interest in international development has also led her to projects beyond the development of medical devices: She has collaborated with Maiti Nepal, an organization that assists sex-trafficking victims, to expand Nepali girls’ access to K-12 education.

“Anisha Gururaj is an inspiration,” says Rebecca Saxe, an associate professor of cognitive neuroscience and co-chair of MIT’s Presidential Committee on Distinguished Scholarships. “Her accomplishments are pretty remarkable, but what stands out most is how deeply she is committed to translating her knowledge and expertise into practical products and benefits that will make life better for people — whether those people are soldiers on the battlefield, young at-risk women in Nepal, or people living in rural villages with less access to modern health care. She perfectly exemplifies MIT’s mission in the world.”

Noam Angrist graduated from MIT in 2013 with a bachelor’s degree in mathematics and economics. He has worked at the intersection of economics and policy, with the goal of reforming education and international aid. As a Rhodes Scholar, Angrist will pursue an MSc in evidence-based social intervention and policy evaluation at Oxford.

Angrist, who hails from Brookline, Mass., was named a Fulbright Scholar to Botswana in 2013. He is currently working in Botswana on educational reform, conducting research on educational outcomes and on successful interventions in public health. He is the co-founder and executive director of Young 1ove, a nonprofit that connects young Africans with life-saving information related to HIV and AIDS.

As an MIT undergraduate, Angrist carried out research related to the Affordable Care Act. He also served as a research analyst for the Jameel Poverty Action Lab under the supervision of Esther Duflo, the Abdul Latif Jameel Professor of Poverty Alleviation and Development Economics. While at MIT, Angrist co-founded Amphibious Achievement, an afterschool enrichment program for urban youth that combines academics and aquatic athletics.

“Noam is a force for good in the world,” says John Ochsendorf, the Class of 1942 Professor of Building Technology and Civil and Environmental Engineering and co-chair of MIT’s Presidential Committee on Distinguished Scholarships. “We are delighted that the Rhodes Scholarship will provide him with the opportunity to continue his work at Oxford. Noam has already made numerous important contributions, and the Rhodes Scholarship will greatly amplify his impact.”

Two MIT seniors and alumnus Noam Angrist have been named Rhodes Scholars, reports Dave Collins for the Associated Press. “It’s a total dream come true,” says Angrist. “The skills I will get at (Oxford) are just incredible, and I’ll come back into the world fully equipped to do what I love to do.”

MIT alumnus Noam Angrist and seniors Anisha Gururaj and Elliot H. Akama-Garren were among 32 Rhodes scholars selected from the U.S. this year, reports Jennifer Smith for The Boston Globe. “The American scholars will join an international group of students chosen from 14 other global jurisdictions, according to the Rhodes Trust,” Smith reports.