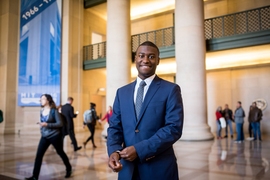 ↓ Download Image
Caption: MIT senior Rasheed Auguste’s parents emigrated from Haiti to Boston as teenagers and completed master’s degrees in the U.S. “When I was born, the standard was, ‘we have master’s degrees; a PhD is the next step for this next generation.’ That was always the bar,” says Auguste. “It just so happens I got lucky. I actually do want this PhD that was prescribed from birth.” 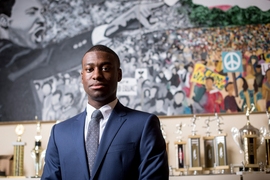 ↓ Download Image
Caption: MIT senior Rasheed Auguste’s parents emigrated from Haiti to Boston as teenagers and completed master’s degrees in the U.S. “When I was born, the standard was, ‘we have master’s degrees; a PhD is the next step for this next generation.’ That was always the bar,” says Auguste. “It just so happens I got lucky. I actually do want this PhD that was prescribed from birth.”

Caption:
MIT senior Rasheed Auguste’s parents emigrated from Haiti to Boston as teenagers and completed master’s degrees in the U.S. “When I was born, the standard was, ‘we have master’s degrees; a PhD is the next step for this next generation.’ That was always the bar,” says Auguste. “It just so happens I got lucky. I actually do want this PhD that was prescribed from birth.”

Rasheed Auguste remembers the exact moment he fell in love with nuclear engineering.

As a freshman in high school, Auguste participated in the Junction summer program offered by the MIT Educational Studies Program. For two weeks he took classes in the afternoon, ate dinner, and then attended an evening seminar. One was given by a graduate student in the Department of Nuclear Science and Engineering.

“It was the most interesting hour that I’ve spent in my life. I don’t think I blinked,” says the MIT senior. “I was sold on MIT, and I was sold on nuclear engineering from that one seminar. So now I’m here, living the dream.”

Auguste, who is double majoring in nuclear science and engineering and physics and minoring in energy studies, has spent the last three years researching nuclear reactors, and is eager to continue this path in graduate school. Both of his parents emigrated from Haiti to Boston as teenagers and completed master’s degrees in the U.S.

“When I was born, the standard was, ‘we have master’s degrees; a PhD is the next step for this next generation.’ That was always the bar,” says Auguste. “It just so happens I got lucky. I actually do want this PhD that was prescribed from birth.”

But Auguste hasn’t let this plan keep him restricted to the lab; he has also become interested in the policies that underlie scientific research and higher education. Last year, he advocated for federal funding of basic science research and drafted nuclear energy policy in Washington. And at MIT, as one of the leaders of the Black Students’ Union, Auguste helped create and present 11 recommendations for making MIT more welcoming for all members of its community, especially underrepresented and minority students.

By the time he started his first semester of classes, Auguste had already secured a grant through the Undergraduate Research Opportunities Program (UROP) in the lab of Mike Short, an assistant professor of nuclear science and engineering. There, Auguste has spent the last three years studying the accumulation of CRUD — chalk river unidentified deposits — on the sides of the cooling loops of nuclear reactors. CRUD reduces the efficiency of a reactor by preventing heat transfer, in some cases making it necessary to shut down the reactor for cleaning.

Auguste began by improving a model system that artificially generated CRUD. After creating what is essentially a boiler to heat water, Auguste tested different materials to see which ones, when boiled over time, gave rise to CRUD. He then used atomic force spectroscopy to quantify how strongly individual CRUD particles adhered to the container.

Auguste’s interest in renewable energy — produced by nuclear reactors and other sources — also led him to science policy. Last April he went to Washington with the Science Policy Initiative to the annual Science-Technology-Engineering Congressional Visits Day to advocate for basic-science research funding.

“I liked that because it was using the research, but advocating for funding to people who have very limited scientific backgrounds. The language that you use changes, but the point has to be the same,” Auguste says.

“That was a really cool opportunity for me to branch out from research in the lab and think about how that should be done, and can be done,” he adds. “It’s super important to make sure [funding] is stable and actually conducive to innovation.”

He went back to Washington this July with the Nuclear Engineering Student Delegation. This program brought together a group of students from across the country to draft a policy agenda that they presented to Congress. “At the end of the day, it’s going to be ‘Fund nuclear research, please, thanks. So I can get a PhD, thanks,’” Auguste jokes.

Auguste has consulted on policies at MIT, too. As a sophomore, he served as the secretary of the Black Students’ Union (BSU), and as a junior he became the BSU’s political action co-chair. Every year, the political action committee organizes a leadership initiative, but “I didn’t know what I wanted to do,” says Auguste, who felt anxious about the high bar set by former committee chairs.

“Then came everything happening at Yale and University of Missouri, which was near the Black Lives Matter stuff that had gone on, but fine-tuned to college campuses, so it was even more pressure. Now it’s not just being a black person, but a black person in an institution of higher learning, specifically at a predominantly white institution. It was definitely like ‘ok what does MIT want to do?’ It was up to me to coordinate that response.”

Students across the country began bringing lists of demands to their administrations, and as Auguste thought about how the BSU would respond, he and the leaders of the Black Graduate Student Association (BGSA) received an email from MIT President L. Rafael Reif, wanting to meet in the BSU lounge. “It’s great because it is our space, and [he] asked how we are doing during this time of national focus,” Auguste says. At the end of the meeting, Reif inquired about what he and the MIT administration could to do improve the lives of underrepresented minority students at MIT.

In the following weeks, Auguste and his friend and fellow senior Alberto Hernandez joined with others from Chocolate City, the student community and living group that Auguste has been a part of since his first year. They began interviewing offices that deal with various aspects of student life — mental health, research, advising and academic programming — about specific things MIT could do to support minority students. But they also turned to students for recommendations.

“An important piece of these recommendations is that they don’t exclusively focus on black students. They focus on students of all minority groups, race, religion, and creed,” Auguste says.

Many of the recommendations have already been implemented, or pilot programs are underway. For the recommendations, which involve changes at the department level, Kolenbrander and Institute Community and Equity Officer Edmund Bertschinger are working with school deans to establish school-based approaches to these recommendations.

“Everybody was very respectful and receptive to the ideas we were getting across, and very open to listening to the reasons why we had the suggestions that we did,” he says. Auguste’s efforts were recognized with the Dr. Martin Luther King Jr. Leadership Award this year.