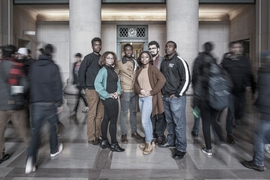 Members of MIT’s Black Students’ Union (BSU) and the Black Graduate Student Association (BGSA) believe that at a moment of great national pain around the question of how black and other minority students experience life at universities, MIT has an opportunity and an obligation to take a firm stand in favor of inclusion. Toward that end, they are working together with MIT’s senior administration to find ways to make MIT more welcoming and inclusive for all.

On Dec. 1, student leaders from the BSU and BGSA presented recommendations from each group to MIT’s Academic Council, which consists of the Institute’s senior leadership and is chaired by President L. Rafael Reif.

Both sets of recommendations — one geared toward the undergraduate experience, the other focused on graduate students — aim to cultivate and support a racially diverse MIT community, while also underscoring the importance of ensuring the comfort and sense of well-being of all members of the MIT community.

“MIT has had a long history of specifically addressing racial bias,” says Rasheed Auguste, co-chair of the BSU, chair of the BSU’s political action committee, and a junior in the Department of Nuclear Science and Engineering. “We have made great strides as a university, but now is the time to set the bar for the next 10 years.”

President Reif praised the students for their work and approach. “I am extremely proud of these student leaders, because they have modeled the best of MIT: Confronted with a difficult problem — a systems problem — they are approaching it with thoughtfulness, creativity, and a spirit of collaboration. Their recommendations highlight problems that our community must take seriously. I am hopeful that by working together, we can make MIT as welcoming and inclusive for all members of our community as we aspire for it to be.”

Student leaders from the MIT Black Students’ Union and the MIT Black Graduate Student Association discuss diversity and inclusion issues at MIT and beyond.

As part of their recommendations, both groups are advocating for greater transparency and accountability in the Institute’s handling of race-related issues. As part of this goal, they propose that each department on campus appoint a diversity representative tasked with improving the experience and representation of underrepresented minorities (URMs) within each department.

“Interactions at the departmental level color your experience of MIT, no matter what,” Auguste says. “So if action is taken at that level, that sets a nice baseline for us to move forward.”

The students are also advocating for dedicated mental health support for anyone experiencing race-based traumatic stress.

“We felt one small thing MIT could do is recognize this happens,” says Chris Smith, a doctoral student in urban studies and planning, and BGSA co-president. “If a student comes and says, ‘I’ve experienced an incident of racial bias that’s really affected me,’ there should be a process to allow that student to have some special academic accommodation. It’s a small thing, but something we think represents a recognition that those experiences are valid.”

The recommendations also propose establishing required diversity training for all members of the MIT community, in the form of focus groups for all incoming students and training sessions for research lab personnel. Promoting racial awareness, Smith says, can ultimately help to nurture innovation — an idea that some major corporations have already adopted.

“Google has a pretty international staff, with different backgrounds,” Smith says. “They’re recognizing that if you want to improve management of your project teams and creative output, it helps to have this training to bring everyone together under a common understanding of each other’s humanity and capacity to contribute to the team. We want to bring something like that to MIT.”

To get a quantitative sense of racial representation at MIT, the two groups are urging the Institute to record and report data and statistics related to the enrollment, retention, and flow (the number of students changing departments) of underrepresented minorities — and in particular, black graduate students, whose numbers have remained fixed at 3.5 percent since 2004 while URM graduate students as a group have increased from 7 to 12 percent.

In its recommendations, the BGSA is asking the Institute to introduce a centralized process of data collection, for MIT’s academic departments to submit information on URM matriculation and graduation.

“It has to be measurable,” says Ellen Staten, BGSA co-president and a graduate student in the Sloan School of Management. “You don’t know what you’re doing unless you measure it. We are MIT.”

In drafting the recommendations, the BSU and BGSA consulted with numerous student and faculty groups on campus, including the Office of Minority Education and the Office of the Dean for Graduate Education, as well as multicultural organizations and members of the LGBTQ community.

“One thing that’s remarkable and unique about our situation is that this has been a collaborative approach,” says Staten. “Instead of us having to come up with demands, it really started with a dialogue between students, President Reif, and the deans.”

The catalyst for drafting the recommendations came in mid-November, with news of racially charged incidents setting off campus-wide protests at Yale University and the University of Missouri. President Reif, traveling in Asia at the time, returned to MIT soon after and sat down with Auguste, Smith, Staten, and others from the BSU and BGSA to hear their thoughts on race at MIT.

“There are people who’ve had really egregious experiences, but sometimes it’s just an accumulation of the smaller instances that can have a toll on people,” Smith says. “Now there is a convergence of these things happening at campuses around the country, and it really is surfacing these dormant feelings that action is needed.”

From that conversation, Reif encouraged both organizations to put their thoughts on paper and share them with the MIT community. Since the students presented their recommendations to MIT’s Academic Council last week, a working group of council members and BSU and BGSA leaders has been formed to address and potentially commit to a number of the recommendations.

MIT Vice President Kirk Kolenbrander says it is important to hear from other non-majority groups on campus to get their unique perspectives.  “Yes, this is about the students, but it’s also about the well-being of the entire community,” Kolenbrander says.

“Our working group looks forward to working collaboratively to address the recommendations that the students have brought forward,” Kolenbrander says. “We have a shared goal of advancing a respectful community that supports everyone’s success at MIT, and we recognize that there is work to be done to reach this ideal. Immediately, we will improve how we conduct surveys and student orientation, and we look forward to identifying opportunities for improvements in financial aid, sharing of statistical data, and accountability for progress in key areas.”

“At MIT, we feel we can have conversations like this, as equals, when we sit down at the table,” says Alberto Hernandez, a member of the BSU Political Action Committee, one of two undergraduate members of the Committee on Race and Diversity, and a junior in the Department of Physics. “A lot of our senior administrators and faculty were students here. So we feel we are vested in this institution as much as it is in us.”

For Auguste, the decision to speak out was at first a conflicted and ultimately a necessary one.

“It was important for me to go out of my way to make sure our voice is heard,” Auguste says. “Because we do have a voice, and it can be suppressed by this internal and sometimes external pressure that says, ‘you’ve been gifted, and you’re so blessed already, you should be thankful for what you have, and not make waves. We’ve already done so much, we just need small steps now.’ But we would argue that big changes need to be made.”