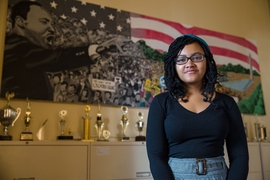 ↓ Download Image
Caption: “There’s no way we can solve anything if we’re not actually speaking to each other,” says senior Alyssa Napier, a chemistry major. 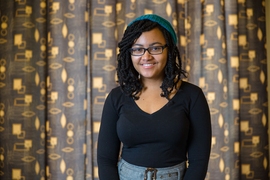 ↓ Download Image
Caption: “There’s no way we can solve anything if we’re not actually speaking to each other,” says senior Alyssa Napier, a chemistry major.
Credits: Photo: Casey Atkins

Caption:
“There’s no way we can solve anything if we’re not actually speaking to each other,” says senior Alyssa Napier, a chemistry major and linguistics minor.
Credits:
Photo: Casey Atkins

Whenever Alyssa Napier sees a problem, she feels an overwhelming urge to fix it — and she has found plenty of opportunities to problem-solve in pursuit of a stronger, more inclusive MIT community.

Napier, a senior chemistry major and linguistics minor with a powerful sense of social justice, has thrown herself into numerous organizations and committees dedicated to improving life at MIT. Her passion for activism has inspired her to try new approaches to familiar problems, such as organizing a dialogue between local police and the students of Black Lives Matter, and initiating conversations about what MIT culture means to students, faculty, and staff.

Napier first became interested in chemistry during high school, at the Gwinnett School of Mathematics, Science and Technology in Lawrenceville, Georgia. She loves how all of chemistry starts with basic principles, and becomes increasingly complicated from there. “When you have these fundamental things that seem simple and obvious and anyone can understand, and then you build these more complex concepts off of that, it’s just wonderful,” she explains.

“Alyssa is unusual in that she is not solely a chemistry major,” Ting says. “Through her ability to solve problems like a linguist or a writer, she is able to think of new ways to solve problems as a chemist. Her mind is constantly challenged in different ways — whether learning a language, writing creatively, or solving an organic synthesis problem.”

“I really enjoy talking to Alyssa,” Ting adds. “We cover a wide range of topics and I find her extremely engaging. Time passes quickly when she’s in my office.”

As a high school student, Napier was unfamiliar with MIT until her mother brought her to a local information session that sold her on the Institute. “It just seemed like a weird, unique place that I would be missing out on if I didn’t go,” she says.

More than three years later, Napier explains that “MIT has been wonderful in helping me accomplish all of my academic and professional goals. But there’s also the flip side of what MIT culture is, and I feel like I don’t fit in.” Recognizing that others might share that feeling, she has spent a lot of time working to shift certain aspects of MIT culture.

For example, this year she served on the committee that planned MC2, an annual conference that gives MIT students a venue for talking about multiculturalism and diversity. “We basically have really difficult, uncomfortable conversations about identity and how these different categories fit into our identity, and it’s wonderful,” Napier explains.

The planning committee chose the theme “People before P-sets” — shorthand for problem sets, a mainstay of teaching at MIT — to ask whether MIT’s culture needs to shift. Napier doesn’t feel that people always come before coursework at MIT. “Mostly in practice we see people putting academics or their professional lives before relationships,” she says. “And it just doesn’t work.”

The MC2 conference, attended by about 50 students, initiated deep conversations about MIT culture, which Napier and the committee then worked to bring to the larger MIT community. One approach was to set up tables where MIT community members could record their impressions of what the Institute values, and what they personally value. The exercise revealed some mismatches between MIT values and individual values; in conjunction with the Institute Community and Equity Office (ICEO), Napier is now working to raise awareness of these mismatches so the community can make progress.

Napier describes how difficult some MIT students have found it to deal with tragedies — such as student deaths, and the Boston Marathon bombing and subsequent killing of MIT Police Officer Sean Collier — in an intense academic environment. “It’s that feeling that I can’t take a moment to pause because if I do, I will get behind,” she says.

She commends President L. Rafael Reif’s efforts to transform MIT into a place known not only for science and technology, but also for its humility, compassion, and caring — as well as this semester’s Community Conversations, organized by the ICEO to make MIT a more compassionate place. Napier hopes MIT culture will continue to become more focused on people and interpersonal relationships.

Napier has also been heavily involved in the Black Lives Matter (BLM) movement at MIT. She reports that last year, as a series of racially charged incidents between police officers and black Americans unfolded across the country, the slow official response from MIT had consequences for the black community on campus. “We were affected in silence, and we were affected in isolation, and we just felt really removed from the MIT community because nobody was addressing it,” she explains.

Last December, a panel discussion — organized by representatives of the ICEO, the Office of Minority Education, the Student Activity Office, the LGBTQ office, the MIT Media Lab, and others across the Institute — explored what role the MIT community can play in the national conversation about race. Attended by more than 400 people, the discussion revealed that many black students harbor negative views of law enforcement. Characteristically, Napier responded by problem-solving: She organized a dialogue between MIT students and officers from the Cambridge Police Department and MIT Police.

“That’s why the slogan ‘Black Lives Matter’ exists, because we feel like black lives do not matter,” Napier says. “But there’s no way we can solve anything if we’re not actually speaking to each other.”

The dialogue allowed police officers to connect with students on a personal level as they explained why they chose to pursue careers in law enforcement, and how they are working to build community on campus and in Cambridge. Napier and the other students felt a renewed sense of hope afterward, and she is organizing a similar dialogue this fall.

In the same spirit of openness and dialogue, Napier also works to encourage conversations about black culture and the challenges of living in a diverse community. As part of MIT’s Black Students Union (BSU), she has helped to run a program called “Ask a Black Person” that enables members of the MIT community to submit questions to the BSU anonymously via Facebook. The BSU also recently had a table in Lobby 10 where members were available to answer questions in person.

The program has addressed questions about everything from the definition of cultural appropriation, to who can use the N-word, to the kind of microaggressions black students have experienced at MIT. A question about how the women in BSU view the “strong black woman” stereotype sparked intense discussions about societal perceptions of black women, and the reductiveness of stereotypes in general.

Napier appreciates that MIT is home to people who are motivated to get things done; in her case, this means channeling her energies into striving for social justice and making improvements to her own community — and beyond. After graduating in June, Napier hopes to work in educational policy, with a goal of addressing disparities in the U.S. educational system. She believes that education should be a great equalizer, but that many students encounter socioeconomic and racial barriers that prevent them from accessing the education they deserve.

“I had a lot of opportunities, and I’m at MIT,” she says. “But the path that I travel is such a rarity, and I want to make my path more standard.”