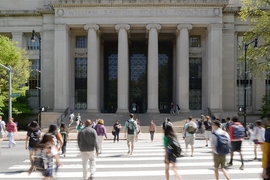 MIT and 12 peer institutions filed an amicus brief Monday with the U.S. Supreme Court in Fisher v. University of Texas. The court will hear arguments in the case on Dec. 9.

The “friend of the court” brief filed by MIT and its peers supports the use of race as one of many factors in making undergraduate admission decisions. The case was brought by Abigail Fisher, a white applicant who sued in 2008 after being denied admission to the University of Texas at Austin. She claimed that the University of Texas’ consideration of race in admissions decisions was unconstitutional and in violation of federal civil rights statutes.

MIT and peer institutions filed a similar amicus brief on Aug. 13, 2012, in anticipation of the court’s first hearing of Fisher v. University of Texas, during its 2012-13 term. In its later decision, the Supreme Court affirmed that there is a compelling state interest in the educational benefits that flow from a diverse student body to justify the use of race as a consideration, but also found that a lower court had not applied the right standard in reviewing whether the University of Texas considered race in a permissible manner in its admission process.

Therefore, it held, in a 7-1 decision, to vacate the judgment of the Court of Appeals, and remanded the case for further proceedings. Justice Ruth Bader Ginsburg dissented in that decision, and Justice Elena Kagan recused herself from the case.

Upon remand, the Fifth Circuit Court of Appeals again found in favor of the University of Texas in 2014. Fisher submitted a petition to review the decision and the Supreme Court granted the petition, agreeing to hear the case again during the court’s 2015-16 term.

MIT officials say that the Institute and its peers seek to impress upon the Supreme Court that a broadly diverse student body is essential to educational excellence. They add that diversity enriches the educational experience for all students, preparing them to be active citizens who can contribute to the challenges of a changing world.

“At MIT, our mission directs us to educate the next generation to bring knowledge to bear on the world’s great challenges for the betterment of humanity,” President L. Rafael Reif says. “Our students absorb many of those lessons — about the world and about humanity — most effectively from one another, as they learn from each other’s experiences and challenge each other’s assumptions. To be effective on the complex teams they will encounter in their careers, they must also learn to solve problems and invent solutions with peers very different from themselves. A richly diverse student body is therefore essential to our educational success.”

The 13 universities write in their brief that they “speak with one voice to the profound importance of a diverse student body — including racial diversity — for their educational missions. [They] seek to provide their students with the most rigorous, stimulating, and enriching educational environment, in which ideas are tested and debated from every perspective. They also seek to prepare active citizens and leaders in all fields of human endeavor.”

The amicus brief adds that race-neutral mechanistic approaches do not provide workable, meaningful alternatives to achieve diversity because such approaches do not allow holistic review of each individual’s merit in contributing to a diverse student body.

The universities say in their brief that “a diverse student body adds significantly to the rigor and depth of students’ educational experience. Diversity encourages students to question their own assumptions, to test received truths, and to appreciate the complexity of the modern world. This larger understanding prepares … graduates to be active and engaged citizens wrestling with the pressing challenges of the day, to pursue innovation in every field of discovery, and to expand humanity’s learning and accomplishment.”