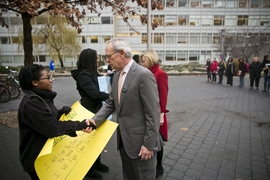 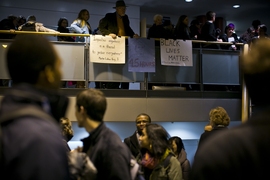 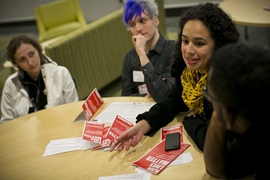 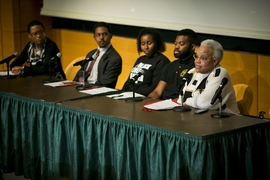 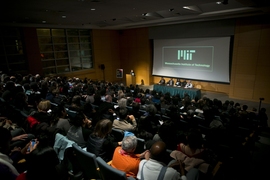 “At MIT, every semester is a hard semester,” MIT President Rafael Reif said at Wednesday afternoon’s Winterfest, in remarks to the MIT community. “For many members of our community, this semester, and especially the events of the last few weeks, in Missouri and Staten Island, have been hard in a completely different way.”

Ten minutes earlier, Reif — like all Winterfest attendees arriving at the Stata Center — had walked past a silent protest: Dozens of members of the MIT community stood outside each of the building’s entrances in silence as a cold drizzle fell, many of them clad in black T-shirts displaying the words “#Black Lives Matter.”

Many of those protesters then came inside to listen to Reif’s remarks. For many at MIT, Reif said, the recent events have been “hurtful, deeply disturbing, and heartbreaking.” Referring to the protesters he’d seen outside, Reif added, “Today, some members of our community organized a demonstration to say, through their silence, that black lives matter. … That the injustices of our society make this statement necessary is incredibly sad.”

Reif said the ongoing pursuit of racial equality and social justice “is one of the world’s great challenges. … Recent events have shown us, again, that terrible fault lines of race are still a major issue in our society. It would be naïve to think that we at MIT are somehow immune to these problems: MIT is a microcosm of our broader society. It shares many of its flaws, as well as its virtues.”

Reif noted that the protesters “are asking us to listen, to collaborate, and to act.”

Less than two hours later, inside Building E51, some 400 members of the MIT community — including about 100 who overflowed Wong Auditorium — participated in a dialogue on race at MIT that featured a panel discussion, as well as smaller group sessions. The event, called “Black Lives Matter,” was sponsored by MIT’s Institute Equity and Community Office, along with the Black Students Union, Black Women’s Alliance, and Black Graduate Student Association.

Moderator Mareena Robinson-Snowden, a fourth-year PhD student in nuclear science and engineering, began by expressing the special responsibility MIT students have: “We are leaders in the solutions-building business,” she said.

Panelist Andrew Jones ’10, SM ’14 added a further positive note, saying he was energized by the demonstrations and the more open dialogue he’d observed around issues of racism. “I’m excited by what will happen next,” Jones said. “These protests will keep going forward as people realize racism didn’t end with the election of Barack Obama as president.”

“We, as a nation, have a covenant that we have to keep,” Mthembu said. “We’re in a long struggle of over 400 years. In the 1960s, when I was in college, we had the same things happening. It’s amazing how memory closes off the past. I’ve been visited by many students filled with rage, frustration, and anger. I try to tell them, ‘You’re part of a process, you’re not alone.’ We’re in trouble if we can’t get the rage down and the dialogue up.”

Senior Ikenna Enwere, a chemical engineering major, echoed Mthembu: “It’s a very stressful time on campus. We want a climate here where the institution reaches out to us before we need to act.”

Melissa Nobles, the Arthur and Ruth Sloan Professor in the Department of Political Science, urged students not to assume that their academic work is somehow separate from issues of social justice. “Yes, you’re scientists and engineers,” she said, “but you’re also citizens who need to understand the society you inhabit, and race is a big part of that.”

Panelist Tammy Stevens ’96, ’97, associate dean of academic and professional programs, said her MIT education taught her how to solve problems, and not just technical ones. “I’m a doer,” Stevens said. “We can’t just keep repeating history. We need to put an infrastructure in place here at MIT” to promote social justice — such as a required class in social justice, Stevens said.

Mthembu highlighted the need to engage in open dialogue about race, despite the potential discomfort. She described a dialogue with a white person who wanted to know, “How should I refer to you?” When Mthembu suggested the person simply call her “Ayida,” she got a head-shaking response: “No, I mean what do I call your people?”

As the audience chuckled, Mthembu recalled explaining, with much patience, “Well, that’s a difficult question. My grandfather was colored. My father was a Negro. I am black. And my children are African-American.”

In order to have these vital conversations, Mthembu explained, “We have to allow for mistakes and forgive each other.”