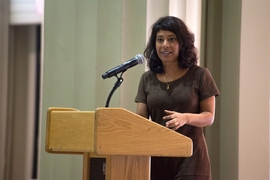 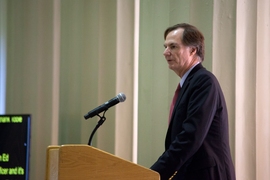 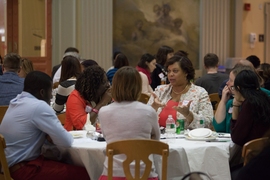 Caption:
Rinku Sen, president and executive director of Race Forward: The Center for Racial Justice Innovation, speaks at “Whose Lives Matter?: A Community Conversation with Rinku Sen about the Black Lives Matter Movement and Beyond."
Credits:
Photo: Jose-Luis Olivares/MIT

Caption:
The presentation was followed by small group discussions among attendees.

Rinku Sen, the president and executive director of Race Forward: The Center for Racial Justice Innovation — a group that produces research, media, and initiatives to advance racial equity — spoke on Oct. 14 at MIT on the Black Lives Matter movement and race in America.

The presentation, which was sponsored by MIT’s Institute Community and Equity Office and open to the public, was followed by small group discussions among attendees.

“In our political and social discourse, the debate over whether or not we’re allowed to say ‘black lives matter’ is really about whether or not we’re allowed to be explicit about racial discrimination at this point in our nation’s history,” Sen said. “What we’re embroiled in as a country is a debate actually about the very nature and definition of racism, and what counts as racial discrimination.”

Sen noted that the Black Lives Matter movement has come a long way in reaching the forefront of the national conversation, as evidenced by its appearance in a question during the previous night’s Democratic presidential debate. Sen observed that several candidates had been challenged on the topic earlier in the campaign, and had evidently prepared for the question.

“But here we are, watching the presidential debate on CNN, and that very question was accepted,” Sen said. “If nothing else, that should be a testament to what collective action can do to get something in the national news.”

But what beliefs underlie the debate? “One big assumption is that the best way to be not racist is to be ‘colorblind,’ meaning that we don’t see race,” Sen said.

“Black Lives Matter is an assertion, a racial analysis in a falsely colorblind world,” Sen said. “It is pointing out that our presumed universal — when we say ‘all’ in this country, the presumed ‘all’ — is white, and actually probably male. If you want attention for somebody else, you’ve got to name that person.”

“That challenge of the presumed universal causes us deep discomfort, clearly,” Sen continued. “It’s an intense discomfort, but it’s a necessary discomfort, because we’re not going to grow as a society unless we lean into that discomfort.”

How to talk about race

“Many people can agree that racial bias is at least sometimes a problem, that at least some people in the United States hold animosity toward people of color,” Sen said. “But the minute we start to talk about [the possible existence of] a system by which people are making sets of repetitive decisions, that the status quo is in itself producing terrible racial outcomes, we have trouble with that.”

The first principle is to use specific language and “plain talk”: Say what you really mean. “We call people of color ‘the disadvantaged,’ we talk about ‘the inner city’, we come up with terms like ‘minority’ and assume that those terms are going to signal the same things to everybody,” Sen said. “We’ve gotten accustomed to these proxies, and they constitute a kind of jargon. That is not serving us; we have to be able to say the words.”

The second principle, she continued, is to focus on impact rather than intention. If you’re observing disparate outcomes based on race, trying to pinpoint intentionally racist individuals behind those outcomes is counterproductive. “Quite often, we are not going to find that person,” Sen said. Many times, the decisions that contribute to inequitable opportunities or outcomes come from deep-seated and unconscious racial biases — implicit biases — that, when aggregated over time and many individuals, create an unequal system.

“Implicit bias predicts so much of our behavior, and it doesn’t just operate in individuals,” Sen said. “When individuals make decisions that become patterns of decisions, then you’ve got what is essentially institutional policy, it’s just not named as policy. It’s a practice that operates as a rule, but isn’t named.”

Asking whether an individual is racist or not generates a yes or no answer; questioning the impacts of the systems that allow racist decisions can lead to a productive conversation that might change those systems, Sen noted.

“Whether or not you suspect there’s an intentional racist in the mix, you’re not going to get as far trying to root that person out as you are focusing on impact and really thinking about the collective choices that might change the kind of impact that you’re having,” she said.

The third principle Sen cited is to use strategic terms in addition to moral arguments. That is, you will make more progress if you align and outline the values you are promoting — such as racial justice — with the broader goals of the institution you’re working within.

“If you aren’t able to make a racially explicit argument that is about meeting the mission strategy of whatever body you’re a part of, beyond being the right thing, it’s going to be hard for you to win that argument. You have to have some answers,” Sen said. “And those answers should be, and can be, well-grounded in the many hundreds of stories from around the country of people who have taken on race explicitly and used that discussion and that effort to unify their community rather than to divide it.”

Sen urged attendees to use these principles as they make decisions throughout their lives. “I know that together we can make a difference in this most important time in our country’s history,” she said.