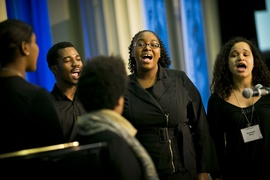 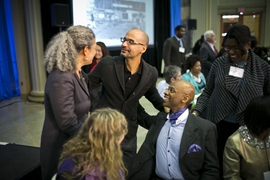 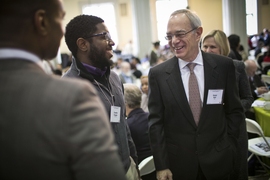 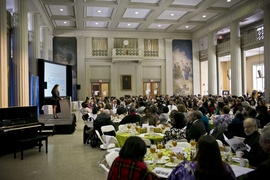 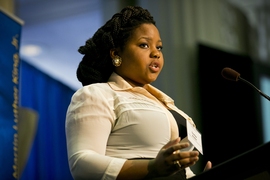 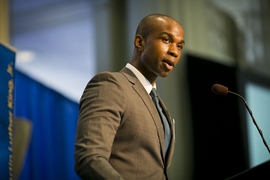 ↓ Download Image
Caption: Nicholas Davis, a doctoral student in biological engineering, delivered a talk about his own experiences of people’s reactions to his race.
Credits: Photo: Dominick Reuter 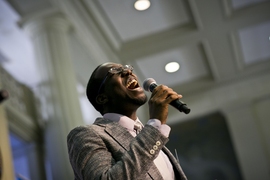 ↓ Download Image
Caption: Kelvin Frazier, a graduate student in chemistry, spoke about his experiences at MIT as a student from the south.
Credits: Photo: Dominick Reuter 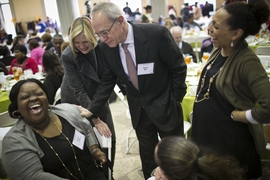 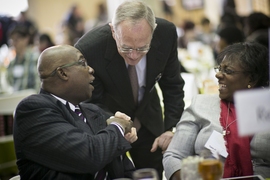 Caption:
Nicholas Davis, a doctoral student in biological engineering, delivered a talk about his own experiences of people’s reactions to his race.
Credits:
Photo: Dominick Reuter

Caption:
Kelvin Frazier, a graduate student in chemistry, spoke about his experiences at MIT as a student from the south.
Credits:
Photo: Dominick Reuter

In an MIT tradition that goes back 41 years, hundreds of members of the Institute community gathered Wednesday for a luncheon to honor the memory of Martin Luther King Jr., with talks reflecting on the need for greater inclusion and communication — both on campus and in the world at large.

The theme of this year’s event — “iActivism: Individuals Empowering the Collective” — figured in remarks by several students, President L. Rafael Reif, and recipients of the Institute’s annual Dr. Martin Luther King Jr. Leadership Awards. The speakers discussed their own experiences and shared their thoughts on actions that members of the MIT community could take to advance the goals of inclusion and equity.

Even though the event’s planned keynote speaker, Indian-American activist Rinku Sen, was unable to attend because of this week’s snowstorm, the luncheon featured a full lineup of speakers who gave accounts, often heartfelt, of their own encounters with prejudicial attitudes.

“I love this university,” said Nick Davis, a doctoral student in biological engineering. “I seek to do all that I can during my graduate tenure here to enhance the MIT experience for all student, staff, and faculty members of this unique community.”

But, he added, “At times it can be incredibly difficult to be a black male in America. It is troubling to have all the potential in the world, and yet be reduced to an image constructed and promoted by the media; an image that — no matter how grotesque, sordid, unfair — can seem inescapable.”

As for what MIT can do, Davis said, “I challenge the MIT administration to mean it when they assert that ‘Black Lives Matter.’ … What about requiring incoming students to have formal education on social justice, gender and racial equality, or global citizenship? What about hiring more minority faculty members for tenure-track positions? What about enrolling more than a handful of black grad students per academic department?”

“My revolution came in the form of learning to love my blackness,” Booker said. “It came in seeing black women on YouTube wearing their natural hair while I was afraid to embrace my own because of how ‘disobedient’ it was.  Even in the transitioning stages when I’d spend hours ‘taming’ it, there would always be someone ready to singlehandedly bother me by running their fingers through my hair, as if I lived to serve as their own personal petting zoo.”

“To a younger me, getting an MIT degree made me worthy of life, not my blackness,” Booker added. “To a younger me, being referred to as ‘Laqueesha’ at a frat on my own campus was a wake-up call. It was a reminder that no matter how much I’d try to get away from my skin, whether I went to MIT or didn’t go to college at all, I am still black. And the value of my life isn’t measured in my institution.”

The manifestations of racism today are different than in the past, Booker said. “Just as racism has shape-shifted from people in white hoods burning crosses to police officers killing black youth without consequence, so must our response change. Today social media has allowed each individual his or her own soapbox to voice opinions, and even be challenged on those opinions.”

But even now, and even on MIT’s campus, discrimination can be surprisingly overt, Booker said: “My first week in mechanical engineering, my professor singled me out during office hours to let me know that I shouldn’t be an engineer, without knowing anything about me.”

“We can all choose to ignore that the world has a long ways to go when it comes to social justice, but we each owe it to ourselves to act,” she said. “Dr. Martin Luther King said it best: ‘The ultimate measure of a man is not where he stands in moments of comfort and convenience, but where he stands at times of challenge and controversy.’”

Reif thanked Booker and Davis for their comments, saying, “You make me proud to be associated with MIT.”

Referring to demonstrations outside MIT’s Winterfest last December, in the wake of several police killings of unarmed black men, Reif said, “I found the protestors’ silence intensely moving, and impossible to forget. Listening to that silence, I heard pain, and outrage, a deep moral purpose, a refusal to accept injustice, and the conviction that, as Americans, we must insist on fair and equal treatment for everyone.”

Reif added — repeating the point twice for emphasis — that “the only way to make progress is by listening with respect to people who don’t think or experience the world exactly the way we do.”

“In this rich community of ours, we have a great deal to learn from one another,” Reif added. “Fortunately, as different as we are, we are members of one community — so, most of the time, we can trust each other enough to really listen.”