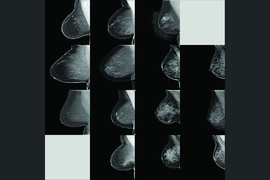 ↓ Download Image
Caption: In training and testing, the model learns to map mammogram features with correct density ratings from human experts in four categories — fatty, scattered, heterogeneous, and dense. It achieved a 94 percent agreement among Massachusetts General Hospital radiologists over 10,000 mammograms. In this image, the model’s density predictions are in the four columns, left to right; the radiologists’ assessments are in the four rows, top to bottom. The density agreements among the model and radiologists are along the center diagonal line.
Credits: Courtesy of the researchers

Caption:
MIT and MGH researchers have developed an automated deep-learning model, currently being used on real patients, that identifies dense breast tissue — a risk factor for breast cancer — in mammograms as reliably as expert radiologists.
Credits:
Courtesy of the researchers

Caption:
In training and testing, the model learns to map mammogram features with correct density ratings from human experts in four categories — fatty, scattered, heterogeneous, and dense. It achieved a 94 percent agreement among Massachusetts General Hospital radiologists over 10,000 mammograms. In this image, the model’s density predictions are in the four columns, left to right; the radiologists’ assessments are in the four rows, top to bottom. The density agreements among the model and radiologists are along the center diagonal line.
Credits:
Courtesy of the researchers

Researchers from MIT and Massachusetts General Hospital have developed an automated model that assesses dense breast tissue in mammograms — which is an independent risk factor for breast cancer — as reliably as expert radiologists.

This marks the first time a deep-learning model of its kind has successfully been used in a clinic on real patients, according to the researchers. With broad implementation, the researchers hope the model can help bring greater reliability to breast density assessments across the nation.

It’s estimated that more than 40 percent of U.S. women have dense breast tissue, which alone increases the risk of breast cancer. Moreover, dense tissue can mask cancers on the mammogram, making screening more difficult. As a result, 30 U.S. states mandate that women must be notified if their mammograms indicate they have dense breasts.

But breast density assessments rely on subjective human assessment. Due to many factors, results vary — sometimes dramatically — across radiologists. The MIT and MGH researchers trained a deep-learning model on tens of thousands of high-quality digital mammograms to learn to distinguish different types of breast tissue, from fatty to extremely dense, based on expert assessments. Given a new mammogram, the model can then identify a density measurement that closely aligns with expert opinion.

“Breast density is an independent risk factor that drives how we communicate with women about their cancer risk. Our motivation was to create an accurate and consistent tool, that can be shared and used across health care systems,” says Adam Yala, a PhD student in MIT’s Computer Science and Artificial Intelligence Laboratory (CSAIL) and second author on a paper describing the model that was published today in Radiology.

The model is built on a convolutional neural network (CNN), which is also used for computer vision tasks. The researchers trained and tested their model on a dataset of more than 58,000 randomly selected mammograms from more than 39,000 women screened between 2009 and 2011. For training, they used around 41,000 mammograms and, for testing, about 8,600 mammograms.

Each mammogram in the dataset has a standard Breast Imaging Reporting and Data System (BI-RADS) breast density rating in four categories: fatty, scattered (scattered density), heterogeneous (mostly dense), and dense. In both training and testing mammograms, about 40 percent were assessed as heterogeneous and dense.

During the training process, the model is given random mammograms to analyze. It learns to map the mammogram with expert radiologist density ratings. Dense breasts, for instance, contain glandular and fibrous connective tissue, which appear as compact networks of thick white lines and solid white patches. Fatty tissue networks appear much thinner, with gray area throughout. In testing, the model observes new mammograms and predicts the most likely density category.

The model was implemented at the breast imaging division at MGH. In a traditional workflow, when a mammogram is taken, it’s sent to a workstation for a radiologist to assess. The researchers’ model is installed in a separate machine that intercepts the scans before it reaches the radiologist, and assigns each mammogram a density rating. When radiologists pull up a scan at their workstations, they’ll see the model’s assigned rating, which they then accept or reject.

“It takes less than a second per image … [and it can be] easily and cheaply scaled throughout hospitals.” Yala says.

On over 10,000 mammograms at MGH from January to May of this year, the model achieved 94 percent agreement among the hospital’s radiologists in a binary test — determining whether breasts were either heterogeneous and dense, or fatty and scattered. Across all four BI-RADS categories, it matched radiologists’ assessments at 90 percent. “MGH is a top breast imaging center with high inter-radiologist agreement, and this high quality dataset enabled us to develop a strong model,” Yala says.

In comparison with traditional prediction models, the researchers used a metric called a kappa score, where 1 indicates that predictions agree every time, and anything lower indicates fewer instances of agreements. Kappa scores for commercially available automatic density-assessment models score a maximum of about 0.6. In the clinical application, the researchers’ model scored 0.85 kappa score and, in testing, scored a 0.67. This means the model makes better predictions than traditional models.

Next, the researchers aim to scale the model into other hospitals. “Building on this translational experience, we will explore how to transition machine-learning algorithms developed at MIT into clinic benefiting millions of patients,” Barzilay says. “This is a charter of the new center at MIT — the Abdul Latif Jameel Clinic for Machine Learning in Health at MIT — that was recently launched. And we are excited about new opportunities opened up by this center.”

Prof. Regina Barzilay speaks with NPR reporter Richard Harris about her work developing AI systems aimed at improving identification of breast cancer in mammograms, inspired by her experience with the disease. “At every point of my treatment, there would be some point of uncertainty, and I would say, 'Gosh, I wish we had the technology to solve it,’” says Barzilay.

Profs. Regina Barzilay and Dina Katabi discuss how AI could transform the field of medicine in a special episode of CNBC’s Squawk Box, broadcast live from MIT’s celebration for the new MIT Schwarzman College of Computing. Barzilay explains that her goal is “to teach machines to do stuff that humans cannot do, for instance predict who is going to get cancer within two years.”

WBUR’s Deborah Becker speaks with Prof. Regina Barzilay about her work applying AI to health care and Prof. Sangbae Kim about how the natural world has inspired his robotics research during a special Radio Boston segment highlighting innovation in the greater Boston area.

Boston Globe reporter Jessie Scanlon spotlights Prof. Regina Barzilay’s work developing machine learning systems that can identify patients at risk of developing breast cancer. Barzilay is creating “software that aims to teach a computer to analyze mammogram images more effectively than the human eye can and to catch signs of cancer in its earliest phases.”

Putting data in the hands of doctors