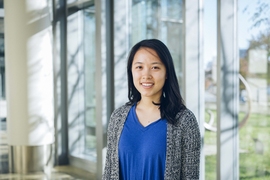 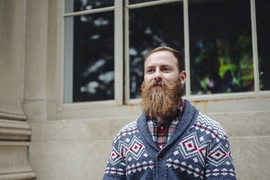 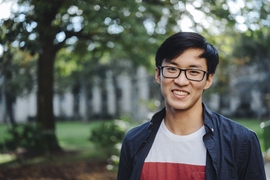 This year’s awards continue MIT’s strong showing; last year, MIT had four Marshall Scholar winners, the largest number of any university. Scholars are selected on the basis of academic merit, leadership, and ambassadorial potential to strengthen U.S.-U.K. understanding. Established in 1953, the Marshall Scholarship is named in honor of General George C. Marshall and celebrates the legacy of the Marshall Plan.

The student scholars were supported by MIT’s Office of Distinguished Fellowships and the Presidential Committee on Distinguished Fellowships. “Nick, Olivia, and Liang have put in heroic efforts this semester and throughout their time at MIT,” says Professor Rebecca Saxe, who co-chairs the committee along with Professor Will Broadhead. “We are all so proud of their accomplishments. It’s one of the best parts of our jobs, getting to play a small part in helping these students realize their visions.”

Nick Schwartz, from Germantown, Tennessee, is an MIT senior majoring in mechanical engineering. Schwartz aims to combine his passion for complex engineering and humanitarian goals to become a leader in nuclear fusion technology, which he considers a transformative and cleaner renewable method for addressing the world’s energy crisis. As a Marshall Scholar, Schwartz plans to pursue a master’s degree in physics with extended research at Imperial College London.

At MIT, Schwartz has sought to engage in work that can improve people’s lives through engineering. At MIT’s D-Lab, he collaborated on the design of a pediatric transtibial prosthetic liner for use in developing countries, and traveled to Kenya and Ethiopia to field-test the product. He has also worked with the Practical Education Network in Ghana, enhancing STEM curricula with video tutorials. Schwartz has interned at Intuitive Surgical, where he worked on improving a surgical robot vision system, and at the CEiiA Center for Innovation and Creative Engineering, where he helped enhance drone technology. This past summer, he was a mechanical design intern at Tri Alpha Energy, a company that seeks to build a nuclear fusion reactor machine. Schwartz helped manufacture the pod levitation system for the MIT Hyperloop team, which finished among the final three teams in the 2017 international competition sponsored by Space X.

Schwartz is also dedicated to child advocacy. For the past two years, he has been an active executive member of Camp Kesem MIT and as coordinator of development has raised over $320,000 to fund the camp experience for children whose parents have been affected by cancer. Schwartz has also served as a program mentor for the MIT-student-led Leadership Training Institute, where he mentored local underserved high school students and advised them on service projects during a 12-week spring semester program. He is currently a mentor at MakerWorks, a student-run machine shop, where he guides other students in designing and building their projects.

Olivia Zhao, from Overland Park, Kansas, is an MIT senior majoring in economics with minors in public policy and mathematics. As a Marshall Scholar, Zhao will pursue a Master of Philosophy in economics at Oxford before returning to the U.S. to earn her doctorate.

As a freshman, Zhao conducted independent research on the influence of public opinion, partisan control, and election results on state- and municipal-level policy with Associate Professor Christopher Warshaw in the Department of Political Science. She went on to do research with Jonathan Gruber, the Ford Professor of Economics, on a variety of topics, including health care in India, tobacco use in New York state, workers’ compensation laws, and long-term care for the elderly. Zhao was named a Burchard Scholar for excellence in her social science studies, and she serves as an officer of the Undergraduate Economics Association, where she promotes learning about economics and the social sciences.

Zhao has analyzed polling data as a summer intern with the Washington political consulting firm Greenberg Quinlan Rosner Research. A lifelong Kansas City Royals fan, Zhao had the opportunity to combine her love for baseball and economics this past summer at the Federal Reserve Bank of Chicago, where, as an economic research intern, she conducted modeling on the financial incentives for minor league baseball players to use performance-enhancing drugs.

Outside of her economics work, Zhao has been an active volunteer for numerous causes. She currently serves as the president for the MIT Academic Teaching Initiative, a program that provides affordable SAT tutoring for low-income Boston area high school students. Through the Priscilla King Gray (PKG) Public Service Center at MIT, she volunteered as a teaching assistant for Teach for America in Milwaukee. Selected by the PKG Center as a team leader for the MIT Alternative Spring Break program, Zhao developed training sessions for volunteers at Cambridge’s Margaret Fuller Neighborhood House to discuss issues related to privilege, food insecurity, and racial inequality. She continues to collaborate with the PKG Center on developing other campus-community partnerships.

Liang Zhou, from Riverside, California, is an MIT senior pursuing a double major in brain and cognitive sciences and electrical engineering and computer science. Zhou hopes to contribute to a better understanding of human thought and decision-making by applying computational techniques to cognitive neuroscience research. Seeking to gain deeper insight into the social and philosophical contexts of neural thought, he will pursue a master’s in computational neuroscience at University College London. He hopes that his research will eventually help drive public policy grounded on more complete and accurate models of human behavior.

Zhou arrived at MIT with a multifaceted science background, having presented at the Intel International Science and Engineering Fair and placing in the top 20 nationwide in the USA Physics Olympiad. At MIT, he is an active member of Professor Josh Tenenbaum’s Computational Cognitive Science lab, conducting research on the mechanisms by which people make intuitive counterfactual judgments of structural stability and physical dynamics. He has also worked with Professor Haim Sompolinsky at Harvard University on a biologically faithful model of Hebbian neural networks. In the past, Zhou interned at Apple on the Siri Speech Engineering team, and his project Harmony (a collaborative music score editor for composers) won the 6.148 MIT Web Programming Competition his freshman year.

As a junior, Zhou served as a chair for EECScon, a conference which provides a venue for advanced undergraduates at MIT to present their novel research. He is also a teaching assistant for MIT’s graduate and undergraduate machine learning courses, which are among the largest classes on campus. Outside the classroom, he promotes health and wellness in his community as a MedLink liaison and was a board member and counselor for dynaMIT, a summer program which introduces STEM fields to low-income middle school students in the Boston area. In his free time, Zhou enjoys running and dancing.

MIT students Nick Schwartz, Olivia Zhao, and Liang Zhou are recipients of this year’s Marshall Scholarship, reports The Boston Globe’s J.D. Capelouto. Schwartz, Zhao, and Zhou are among the 43 students from across the country who received the scholarship, which allows them to pursue graduate studies at a British university.