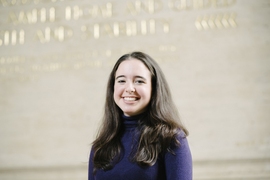 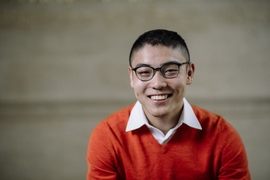 Two MIT students, Mary Clare Beytagh and Matthew Chun, were selected this weekend as Rhodes Scholars and will begin postgraduate studies at Oxford University next fall.

Recipients of the prestigious Rhodes Scholarship are selected based on scholarly achievement, character, commitment to the public good, and leadership potential. The scholarship provides funding for one to three years of graduate study at Oxford.

“It has been a privilege to serve as co-chair of the Presidential Committee for Distinguished Fellowships alongside Professor Rebecca Saxe, and to watch these amazing students grow through the process,” says Professor Will Broadhead. “We could not be more proud of how they represent MIT to the world.”

Mary Clare Beytagh, from Dallas, Texas, is an MIT senior pursuing a double major in biology and literature. At Oxford, Beytagh plans to undertake an MS degree in integrated immunology to prepare for her future career as a physician-scientist.

Growing up, Beytagh trained as a ballet dancer, and studied and performed with the Dallas Metropolitan Ballet and New York’s American Ballet Theatre. But she decided to forego a career as a professional dancer to focus on science. Beytagh became fascinated with biomedical research in high school when she conducted research on genetic drivers of B-cell lymphoma at University of Texas Southwestern Medical Center. At MIT, she has been an undergraduate research assistant since her freshman year in the laboratory of Professor Tyler Jacks, where she has worked on several cancer projects, including engineering mouse models to study immune responses against lung and colorectal cancers.

She was a presenter at the MIT Biology Undergraduate Research Symposium, and a speaker and poster presenter at the American Association for Cancer Research annual meeting. Beytagh has also conducted research at The Rockefeller University with Professor C. David Allis, and this past January did a clinical research externship in the Department of Emergency Medicine at Yale New Haven Hospital. For her accomplishments in the humanities, she was selected as a Burchard Scholar.

On campus, Beytagh holds executive positions with the Leadership Training Institute, a student group that provides a 12-week spring mentorship program for underserved Boston-area high school students. She is an active member of MedLinks, offering peer counseling on physical and mental health issues to fellow students in her residential hall, and serves as a teaching assistant for the MIT mathematics department in the Experimental Study Group (ESG), a freshman learning community. Beytagh has applied her Spanish-speaking skills by volunteering as an interpreter at multiple hospitals and at the Massachusetts Bay Food Pantry.

Matthew Chun, from Arlington, Virginia, is an MIT senior majoring in mechanical engineering with a minor in management science. As a Rhodes Scholar, Chun seeks to further his knowledge of policy and law, with the goal of advising organizations that bring life-improving technologies to countries around the world. At Oxford, he will pursue a second BA in jurisprudence before returning to the U.S. to enroll in law school with a focus on intellectual property.

As a freshman, Chun joined Professor Hugh Herr’s Biomechatronics Laboratory, where he helped design an exoskeleton adaptor. His experience there inspired him to co-found Need-a-Knee, LLC, a student-led company that has developed a low-cost transfemoral rotator for above-knee amputees. Chun and his team have field-tested the device in India and partnered with international and domestic humanitarian organizations. Besides winning multiple awards for this technology, including the 2017 MIT IDEAS Global Challenge, Chun has secured over $50,000 in funding to develop prototypes and begin manufacturing. He currently serves as the chief executive officer and head of business development for the company.

Chun was an “innovator-in-training” at Tikkun Olam Makers in Israel, where he managed multiple projects to build open-source assistive technologies for people with disabilities, and led a project to design an affordable prosthetic dog paw. Chun has also sought opportunities to gain experience in the business aspects of technology; he has interned with companies in venture capital, investment banking, and patent law. He has conducted independent research on the legal challenges faced by new technologies with John Akula, a senior lecturer at the MIT Sloan School of Management.

A two-time Academic All-American wrestler for MIT, Chun currently serves as team captain. He is also the co-editor-in-chief of Et Spiritus, MIT’s student-run journal of Christian thought, has held executive roles with the national engineering honor society Tau Beta Pi, and was selected as a member of an MIT delegation to Congress to advocate for federal science policy.