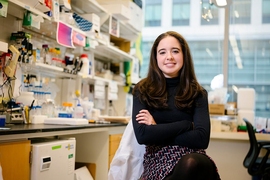 ↓ Download Image
Caption: MIT senior Mary Clare Beytagh hopes to become a science writer as well as a physician-scientist, telling stories that humanize patients and focus on the social and economic determinants of health.

Caption:
MIT senior Mary Clare Beytagh hopes to become a science writer as well as a physician-scientist, telling stories that humanize patients and focus on the social and economic determinants of health.

When MIT senior Mary Clare Beytagh isn’t performing research at the Koch Institute for Integrative Cancer Research or writing poetry, she can be found in ballet class at the Harvard Dance Center, continuing her 15 years of intensive dance training.

For Beytagh, ballet provides a reprieve from the hustle and bustle of academics and research. Her twice-a-week classes are “a nice way to de-stress and think about things,” including flashbacks to exciting moments on stage as a preprofessional ballerina, and fond memories with friends.

On days without dance class, Beytagh goes running. The two activities are “sort of antithetical to each other,” she notes. However, she makes it work. Beytagh is majoring in biology and literature at MIT — two fields that, like running and ballet, rarely intersect. But Beytagh aims to change that.

The summer before Beytagh’s senior year in high school, her teachers encouraged her to apply to a research program at the University of Texas Southwestern Medical Center.

The eight-week program took Beytagh out of the the classroom and into to the lab of Kathryn O’Donnell-Mendell, a cancer researcher studying B-cell lymphoma. The program was Beytagh’s first experience with scientific and medical research, and she was hooked.

She continued the research into her senior year of high school and submitted a paper to the prestigious Siemens Competition in Math, Science, and Technology.

While working in the lab, she met an MD-PhD student who opened Beytagh’s eyes to the possibility of pursuing medicine and cancer research simultaneously. When Beytagh applied to college, she looked for schools that emphasized undergraduate research. MIT topped her list.

“MIT rises above everyone else in that aspect,” she says. During an on-campus visit, she took part in a tour that allowed her to learn about the different types of research performed at the Institute. By the end of the tour, Beytagh knew MIT was the right fit. “These are my people,” she recalls thinking.

Upon the advice of her research advisor at UT Southwestern, after Beytagh arrived at MIT she sought out Tyler Jacks, professor of biology and director of the Koch Institute.

Beytagh has worked in the Jacks Lab since her second semester at the Institute. She and the other researchers are developing mouse models for cancer that recapitulate more aspects of the human disease. One goal, for example, is to have the tumors grow in the same locations in the animals as they do in humans.

Last year, Beytagh was invited to speak at the American Association for Cancer Research meeting. There, she presented her research alongside postdocs and early-career cancer biologists.

“That was a cool experience,” she says, “But then, it was back to the lab immediately!”

Outside of the lab, Beytagh enjoys expressing herself through her writing as a literature major.

During her sophomore Independent Activities Period (IAP), she traveled to Madrid to study Spanish literature. Her class was taught by MIT professors Stephen Tapscott and Margery Resnick. It examined post-Spanish Civil War novels and poetry — and captivated Beytagh.

The visit had such an impact on Beytagh that she embarked upon an exercise inspired by one of Collins’ poetry series. The experiment lasted 21 days, during which Beytagh wrote poetic snapshots of each day within a set of predetermined rules.

“I’m a person who likes rules, but within those rules finds creativity,” Beytagh says.

On the 21st day, poetry morphed from hobby to emotional necessity. She found out her good friend had been diagnosed with Hodgkin’s lymphoma. At that moment, her poetry “became catharsis.”

She decided to declare literature as her second major.

“I had been flirting with the idea, but I had never committed,” she says, “Then, at the end of [sophomore] year, I committed.”

“This is it,” she says, recounting her reasoning, “These professors are amazing. I’m having a great time. It’s enriching me as a person.”

Bringing backstories to the forefront

Beytagh often integrates her research and other undergraduate experiences into her writing.

During her junior year IAP, she did an externship in the Yale School of Medicine’s emergency medicine department, with Charles Wira, III. She worked on developing a new risk score system for patients experiencing sepsis, but it was what she witnessed while shadowing in the emergency room that transformed her outlook.

“The most timely and impactful thing I saw there was the nature of the opioid epidemic,” she says, “You can read all you want in The New York Times and look at graphs — but that’s just statistics.”

That winter, she witnessed two to three patients coming into the emergency room for opioid overdoses each day she was there.

“What you don’t get in a graph,” she points out, “are the backstories of all these people.”

After that experience, she began to write about patients she saw and interacted with, in her poetry. In the long term, Beytagh hopes to become a science writer as well as a physician-scientist, telling stories that humanize patients and focus on the social and economic determinants of health.

Though she plans to study cancer biology in an MD-PhD program, she hopes to end up at an institution that allows her to take on other projects such as epidemiological research on opioid addiction.

After a recommendation from her roomates freshman year, Beytagh joined the Leadership Training Institute, an organization which provides leadership training and mentorship to underprivileged Boston area high school students. The institute runs a 12-week program for 50 students each spring.

As the director of the program, Beytagh aims to reach students who are shy but passionate about community service and leadership, and works to provide them with transformative experiences.

“It’s always very gratifying when the students [graduate from the program],” she says. “They say, ‘You guys have made me realize that I not only want to keep service as a part of high school, but as a part of my career and onward.’”

“That gives you chills,” Beytagh says. “If you can spark that in someone and make them realize having an others-focused heart is the way to live life, it can only be good for our world.”