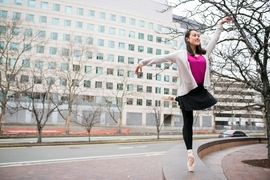 ↓ Download Image
Caption: “When I came to [MIT’s Campus Preview Weekend], I was just blown away by how everybody was so into whatever they were doing,” Maiko Kitaoka says. “I love that atmosphere.”
Credits: Photo: Ian MacLellan 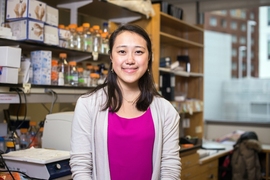 ↓ Download Image
Caption: “When I came to [MIT’s Campus Preview Weekend], I was just blown away by how everybody was so into whatever they were doing,” Maiko Kitaoka says. “I love that atmosphere.”
Credits: Photo: Ian MacLellan

Caption:
“When I came to [MIT’s Campus Preview Weekend], I was just blown away by how everybody was so into whatever they were doing,” Maiko Kitaoka says. “I love that atmosphere.”
Credits:
Photo: Ian MacLellan

Whether investigating the early-stage development of Drosophila melanogaster or the mystery of “The Hound of the Baskervilles,” Maiko Kitaoka wants to know: how and why?

A biology major in her senior year at MIT, Kitaoka is fascinated by developmental biology. After doing stem cell research in Australia, she spent the last two years working in the lab of Department of Biology Professor Terry Orr-Weaver.

Kitaoka is also a keen reader — lately, she’s found that her 15-minute walks to the lab are a great time to turn a few pages. She loves classics such as “Pride and Prejudice,” “Jane Eyre,” and the Sherlock Holmes novels: “They tell a story, but they also tell you something about human nature, and how people perceive things, or why things happen,” she says.

Born in Japan, Kitaoka moved to the U.S. when she was four. She grew up in Lawrence, Kansas, where her parents finished their graduate degrees; now, they live in Indiana. (Her family’s globe-hopping makes the question “Where are you from?” unusually complicated, she says.)

When she’s not in class or in the lab, Kitaoka might be meeting with MedLinks, a student health and support group that she leads as president. Or she might be spending time with friends, enjoying the last few weeks of senior year. And every so often, she might get struck with an urge to grab her ballet shoes and head downstairs to the studio in her dorm, McCormick Hall, to dance.

Kitaoka was 11 years old when she knew she wanted to be a professional ballerina.

She was playing Clara in her ballet school’s annual performance of “The Nutcracker,” featuring all the students in the school. “It was the time of my life,” she says. “When you’re onstage, you can see where the lights come out; the rest is black. There’s this feeling that you are alone with your fellow dancers. I just loved that feeling.”

Kitaoka threw herself into ballet. She spent her summers dancing and eventually began auditioning for year-round pre-professional programs. The summer before her freshman year of high school, a ballet school in New York City offered her a spot in their program. Kitaoka accepted.

In support of their daughter’s dream, Kitaoka’s parents decided that her mother would move with Kitaoka to the city for her high school years. It was an exciting and intense time. “It was a lot of work — and a lot of pain, every so often — but it was a lot of fun,” Kitaoka says.

During her second year in New York, Kitaoka was practicing at the ballet barre when one of her teachers approached. Kitaoka’s back looked a little uneven, she said. “She asked if I had ever been tested for scoliosis,” Kitaoka remembers. “She said, ‘maybe you should look into it.’”

Scoliosis, a sideways curvature of the spine, is a fairly common medical condition, particularly in children and adolescents. Though many cases are mild and require no treatment, some cases can be painful and debilitating. For a dancer, a diagnosis of scoliosis could be career-ending.

The X-rays of Kitaoka’s spine — endless scans, they seemed to her at the time — came back with bad news: She had scoliosis. Her doctor said the condition was fairly advanced, and recommended surgery.

Deferring the recommended surgery, Kitaoka began a training regimen of swimming, yoga, and Pilates. The dancing that had been the center of her life for so long was suddenly shrouded in uncertainty and discomfort. But there was one part of her life that Kitaoka felt she had control over: She turned her focus to her academic classes.

“In school, I knew what I was doing. This is my assignment, and I have to get it done,” she says.

Kitaoka had always been a good student, but she had been planning for a career in ballet. Now, she began to consider college. She loved English and history, and liked science as well. Her father, an economics professor, encouraged her to apply to MIT. Kitaoka hesitated; would MIT be interested in a student with her background?

A few months later, she had her answer. “I was blown away when I got in,” Kitaoka says. “That was the first time I cried over an acceptance.”

She attended MIT’s Campus Preview Weekend (CPW) that spring, still unsure of her college decision. Those few days on campus — exploring the school with other prefreshmen, sitting in on lectures, and hopping between student-run events — helped make up her mind. “When I came to CPW, I was just blown away by how everybody was so into whatever they were doing,” Kitaoka says. “I love that atmosphere.”

Kitaoka was struck by an introductory biology course she attended, taught by biology professor Hazel Sive. “She was talking about neurobiology, and I remember sitting there thinking, ‘Wow, this is amazing! Biology is so cool!’”

From a single cell

The next year, Kitaoka took the full course that had made such an impression on her at CPW, 7.013 (Introductory Biology). The class piqued her interest in developmental biology in particular. “You start from something so minimal — one cell — and it has everything in it to make everything else,” she says. “That was the underlying thing I really wanted to study.”

Kitaoka spent the summer after her sophomore year in Australia doing stem cell research, solidifying her interest in developmental biology. When she returned to MIT, she joined Terry Orr-Weaver’s lab. Kitaoka’s work focuses on the role of a particular protein in the development of a fruit fly from an egg cell — an oocyte — to an embryo.

“We’re looking at the changes between the two states, seeing what’s happening in between and how the protein levels are changing,” she says.

Kitaoka studies a protein known as a thioredoxin, which helps to regulate the cell’s redox state, facilitating the transfer of electrons between proteins within the cell.

“The cool thing about this protein is that it’s female-specific, and it’s only expressed in the female ovary,” she says. “So the other side of this is, how is this protein different from the ubiquitous thioredoxin that all the flies have in adulthood?”

Redox regulators can play a critical role in the bodies of flies and humans alike, modulating the levels of reactive oxygen molecules in cells. At the right levels, these molecules are important in normal cell functions; otherwise, they can have damaging effects. Understanding how redox states are regulated in cells is key to understanding how cells can deteriorate over time — including during the aging process.

“Fertility does go down, even in flies, the more the female ages,” Kitaoka explains. “There’s this female-specific redox regulator, so what is it doing throughout that period of time?”

As she nears graduation, Kitaoka looks forward to continuing her study of developmental biology next year, when she is beginning graduate school at the University of California at Berkeley. “I really like the basic science concept: You can see the mutant phenotype, you can see that something is wrong. Now how do you figure out what is going on and why?” Kitaoka says.

It was beauty and elegance that captivated Kitaoka in ballet; now, she seeks to unravel the beauty and elegance of a single cell. Though she is far from where she once envisioned herself, Kitaoka has kept an open mind and is taking one step at a time. “For me, the motivating drive is, I will never get this again,” she says. “Take whatever it is life has thrown at you, and take advantage of whatever opportunities you have.”