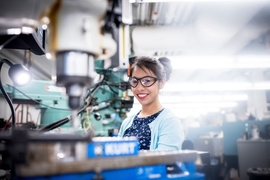 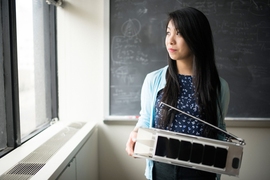 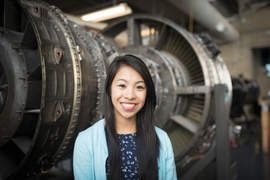 ↓ Download Image
Caption: Aerospace engineering involves a combination of disciplines, Raichelle Aniceto says: “You have to understand the mechanical structure, but you also have to know the code and software, as well as the systems. And on top of that, you have to learn the physics to make things fly.”

Caption:
Aerospace engineering involves a combination of disciplines, Raichelle Aniceto says: “You have to understand the mechanical structure, but you also have to know the code and software, as well as the systems. And on top of that, you have to learn the physics to make things fly.”
Credits:
Photo: Ian MacLellan

Talk for a while with MIT senior Raichelle Aniceto about satellites, and you might find you’ve caught the aerospace bug. An aeronautics and astronautics major from Salt Lake City, Aniceto has a contagious enthusiasm for the space gadgets she’s spent the last four years helping to develop.

“There might be something you’re passionate about that other people might be interested in, but they might just not know about it,” she says. “I didn’t know a lot about aerospace engineering until I got to MIT, and I wish I did before.”

Though she was new to aerospace when she entered MIT, Aniceto wasted no time immersing herself in the field. She has helped to design and build numerous satellites, led the MIT Robotics Team in building a planetary rover, conducted flight test research in Germany, and founded the student group MIT Women in Aerospace Engineering. As a sophomore, Aniceto was named in the magazine Aviation Week’s “The Twenty20s,” a list of 20 of the world’s top aerospace engineering and technology students in their 20s.

Aniceto was drawn to math, science, and engineering early, joining her high school’s FIRST Robotics team and science club. She spent summers at the University of Utah doing research in a biomedical lab, then working in the department of mechanical engineering.

“I knew I wanted to do something math- and engineering-related,” Aniceto says. “MIT was always a dream school of mine that I never thought I would actually get into."

The summer after her acceptance, Aniceto chose to arrive at MIT week early to take part in a Freshman Pre-Orientation Program (FPOP), where she got to know some of her new classmates as they worked together to make bottle rockets and balsa wood airplanes.

“From that experience, I realized that in aerospace you combine different disciplines,” she says. “You have to understand the mechanical structure, but you also have to know the code and software, as well as the systems. And on top of that, you have to learn the physics to make things fly.”

Inspired by her FPOP experience, Aniceto sought out an Undergraduate Research Opportunity Program (UROP) spot in the Space Telecommunications, Astronomy, and Radiation Laboratory, or STAR Lab, led by Kerri Cahoy, the Boeing Assistant Professor of Aeronautics and Astronautics.

Aniceto’s first project was a microsized satellite called MicroMAS. She began in the MIT Machine Shop helping to machine components, and the satellite was launched by NASA the summer after her sophomore year.

Now, Aniceto is working on a satellite the size of a shoebox, called a CubeSat. “We’re putting an optical communications systems on it, and it’s going to the moon,” she says. “From the moon, we’re going to try to beam a laser down to Earth and transmit data that way.”

Getting a satellite to the moon with such a small propellant system is a challenge in itself, but using a laser to transmit data is another.

“Satellites normally use radio frequency,” Aniceto explains. “Laser communication is a new method that people haven’t been able to miniaturize onto such a small platform. This one can fit in your backpack.”

Not only does the laser need to produce a strong enough signal to reach the Earth nearly 240,000 miles away, it also needs to get to the right spot on the Earth.

“We were designing our own system that will take the laser and amplify it,” Aniceto says. “The hard part about laser communications is the pointing, because you have to be really precise to hit a certain target from that far of a distance. So we’re using this fine-steering mirror, and it’s tilting back and forth by very, very small degrees. If we miss, we won’t get the signal to the ground station.”

Her team’s CubeSat won second place in the first and second ground tournaments of the NASA Cube Quest competition this year, and they’re now competing for a NASA-sponsored satellite launch.

Aniceto’s growing interest in satellites and space systems has led her to internships at companies including aerospace manufacturers Orbital ATK and Boeing, as well as OneWeb, a company aiming to provide affordable global Internet access through satellites. Now, she is considering pursuing her interest further as a career.

“Working in the research lab from that initial project, I was doing small things like machining a part, but that did translate a couple years down the line into something that I could see myself doing,” she says.

Just as important to Aniceto as classwork and research is her community at MIT. She’s a member of Kappa Alpha Theta, and she dances with the competitive hip hop group Ridonkulous — for her, dance is “not only an outlet, but another family.”

To help foster community in her major, as a sophomore Aniceto founded MIT Women in Aerospace for undergraduate students in the department. “We have low numbers for female versus male students in the department, and I wanted to develop a group where we could become closer and support each other,” she says. The group runs a mentorship program as well as a professional development program, bringing speakers from the aerospace industry to campus.

Aniceto has shared her passions globally as well, teaching math, science, and engineering to middle and high school students in Spain through the MISTI Global Teaching Lab and in China through the MIT China Development Initiative.

Important in all that she does, Aniceto says, is having fun — and making sure others are, too. As the events director of the MIT Undergraduate Association, she helped to plan activities for her class, such as SpringFest, an annual concert and highlight of spring term.

“I feel a sense of satisfaction when I see classmates attend events and have fun,” Aniceto says. “I want to make sure that through it all, we’re still enjoying ourselves.”

Aniceto’s parents emigrated to the U.S. from the Philippines before she was born. Her mother and her father, a mechanical engineer, worked hard not only for a better life in their new home but also to help support their family members in the Philippines and California.

“My mom was the oldest of her sisters, so when they all came over, she didn’t get a chance to finish college and pursue what she wanted to do, because she had that family dependent on her,” says Aniceto. “I look to that, and I think it’s really admirable to give that up for your family. I think because I saw that growing up, I wanted to make sure that I was doing the absolute best that I could and challenging myself to really utilize the resources that I had.”

To Aniceto, that means not only working hard, but also making an impact. “I want to study hard and use my career to be able to do something to give back,” she says. “But at MIT, I’m going to take advantage of all these things they have to offer, and enjoy it, and use my own set of talents to impact other people around me.”

After graduation this spring, Aniceto plans to attend graduate school and continue to pursue her interest in space systems, as well as recently developed interests in additive manufacturing and 3-D printing. She says her dream is to become the chief technology officer at an aerospace company, and she is interested in developing satellites to help provide global Internet access.

“Since my dad’s family is in the Philippines, we would spend a lot of time calling, Skyping, or using Google Hangout,” Aniceto says. “From childhood, I was very dependent on connecting with people. I think that kind of connection is really valuable and something everyone should have access to.”