Jaleesa Trapp shakes things up in the classroom and in computing 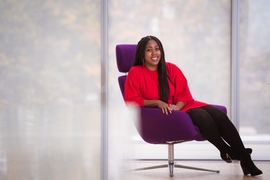 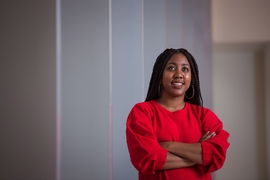 “My introduction to MIT was an interesting one,” says Jaleesa Trapp, a graduate student in the MIT Media Lab. “MIT came to me.”

That introduction came in the form of an afterschool program called the Computer Clubhouse in Trapp’s hometown of Tacoma, Washington. The program, founded by the Media Lab research group Lifelong Kindergarten and run by the The Clubhouse Network, is a technology-based learning environment for high school students that has been introduced to 100 underserved neighborhoods in over 20 countries. At the Clubhouse, Trapp learned graphic design, coding, video editing, and robotics, and she was introduced to a wide spectrum of possible STEM careers.

Now, Trapp is working toward her PhD in the very same research group. Informed by many happy hours spent at the Clubhouse, her undergraduate studies, and her experience teaching high school, she aims to study the different ways youth, particularly black and brown youth, interact with computers and technology. She is especially curious about nonstandard human-computer interfaces — technologies distinct from desktop or laptop interactions.

The Clubhouse in Tacoma was in close proximity to Trapp’s high school, yet it felt worlds away. “I hated high school, but I liked going to the Clubhouse,” she says. “It was like I was in two different worlds. My teachers had no idea that at the Clubhouse I was creating these interactive CD-ROMs and doing all types of things.”

Trapp’s experience at the Clubhouse, along with a high school internship at Microsoft, crystallized her interest in using technology to solve problems for people. She received her undergraduate degree at the University of Washington in human-centered design and engineering with a concentration in human-computer interactions.

After college, Trapp spent a year with AmeriCorps before returning to the Clubhouse as a coordinator, running the program she had attended just a few years before. After a year working solely at the Clubhouse, she was approached by local educators to teach high school. She hesitated at first but then realized the impact she could have. “I ended up going back to teach high school [because] I wanted to give more youth the opportunity to have the same Clubhouse experience I did — but inside the classroom. Not all students can come to an afterschool program, so I try to find a way to do that inside the school.”

Trapp describes her pedagogical approach as a bit unorthodox. She recalls a computer science class in which she taught students how to make their own playdough to use with Makey Makey, software that allows children to make their own controllers with conductive objects. “The way that I run things, when I go to other teachers’ classrooms I know they think, ‘She’s letting these kids run wild!’ I like going and shaking things up.”

After teaching for three years, Trapp wanted to apply her skills and her proclivity for shaking things up to the world of academic research. When she applied to the Media Lab, the Lifelong Kindergarten Group was a natural fit. The group is inspired by the way learning occurs in kindergarten — through building and experimenting — and aims to expand that concept to other technologies and learning experiences.

One of the strengths of the program, she says, is the diverse backgrounds of others in the Media Lab. "Kind of like the real world!” she laughs. “We all have these different skills and knowledge to bring to work on a project, which I think makes it a lot more dynamic than if we were to work alone.”

Despite the diversity of backgrounds, Trapp notes that she is one of just a few black students in the Media Lab, which at times makes her feel hypervisible: “I change my hair a lot. I wear a lot of braids and twists and stuff. And just the comments about my hair, asking why it’s so different … just having to answer that type of question is really exhausting. Like, you get to come here and be a student, and I get to come here and teach you about black hair … and then be a student.”

Trapp has channeled the added pressure she feels as a minority student into her master’s thesis, which she recently finished. It’s an antiracist learning guide that helps educators engage marginalized youth in STEM activities by creating an equitable learning space. One important way to do that, Trapp explains, is by shifting power: “Even just the way we do introductions, allowing students to stand up there and say their names instead of [teachers] butchering their names, asking them their preferred name, giving them that power, asking them what they value.”

“I don’t have rules in my classroom,” she adds. “They come in and as a group we decide, how do we want to treat each other in this space? How do we want to treat this space, and how do we hold each other accountable for it? And by doing that, if something happens I can always remind them, ‘You set this up, not me, and I’m also held accountable to it.’” Trapp looks forward to using her master’s thesis work as a foundation for her PhD thesis, but with more of a focus on how youth interact with computing.

As she gears up for her next four years in Boston, Trapp admits she misses her beloved Tacoma, where her strongest support system remains. (The town raised thousands of dollars after she was admitted to MIT, to help her to move to campus and settle in.) She also feels a responsibility to the youth of Tacoma.

“I think I’m so invested because I want to be able to give opportunities that I didn’t have,” she says. “If there were more opportunities like the Clubhouse … I think that could inspire kids to do other things, and know that they’re capable, and know that there’s more out there. And then, hopefully, they would still want to give back to Tacoma, too. For the future of Tacoma, I want kids to know that they can go and do anything that they want to do.”