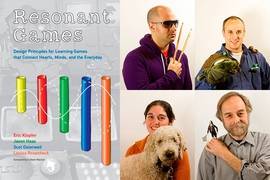 To succeed at “Lure of the Labyrinth,” a video game created by designers in MIT’s Education Arcade, players rescue pets from an underground lair inhabited by monsters. In so doing, they solve mathematical puzzles, decipher maps, wear monster costumes as disguises, and cooperate with Iris, daughter of Hermes from classical mythology. With tenacity, players can foil the monsters’ plot and free hundreds of pets.

“Labyrinth” is intended for schoolkids. Funded by the U.S. Department of Education’s Star Schools program, the game was tested in Baltimore and rural Maryland, used feedback from teachers, and is intended to improve middle-school mathematics and literacy. But it is also meant to be a compelling, competitive challenge in and of itself.

As such, “Labyrinth” represents many things about the philosophy of the Education Arcade, a design program situated at the junction of gaming and learning. As the program’s principals write, the world of “Labyrinth” is intended to help kids “succeed in school and life through perseverance and collaboration.”

A game, in short, can enhance a growth mindset.

“Our goal is not just to make games that are interesting interludes in a classroom, but really to connect to the students’ deeper appreciation for learning and their own trajectory in life,” says Scot Osterweil, a game designer and creative director at the Education Arcade.

Reflecting on more than a decade of research and design, the authors discuss a core set of principles — “honor the whole learner,” for starters — and list ideas for educational game design, while underlining that they, themselves, keep learning about their craft.

“We have a list of principles,” Klopfer says. “It’s not a formula.”

Indeed, one of the motifs of “Resonant Games” is that, while experience and data offer useful feedback, game design remains an unpredictable task: It’s never entirely clear how well certain games will catch on with an audience.

“Good design is usually surprising,” Osterweil says. “It first surprises you, then it surprises the player.”

Take “Vanished,” a 2011 game the Education Arcade developed in conjunction with the Smithsonian Institution.

The premise of this two-month-long game with thousands of participants was that people from the future contacted us in the present, with a question: What event, after our present but before their time, led to the loss of civilization’s historical records? Decoding clues, players had to find and provide information about Earth’s current condition, including temperature and species data.

“With ‘Vanished’ we were continuously learning new things about the players as the game went on, and we changed the game by what we were sensing in the players,” Osterweil says. “They surprised us by the depth of their engagement.”

Sometimes the surprise comes not from how people play a game, but who plays it. Take a pair of games the Education Arcade developed in 2008 and 2009, respectively. “Palmagotchi” is a secondary-school-level game about evolutionary biology, simulating an island where players help manage the ecosystem. “Weatherlings,” created in collaboration with Nanyang Technical University in Singapore, is a Pokemon-style game with online collectible cards that represent weather-dependent creatures that battle each other in U.S. cities.

The Education Arcade researchers were warned to expect a highly gendered response to the games, but in reality, that did not occur.

“We got lots of feedback from people who were saying, “Oh, that first game is only going to appeal to girls. Boys are not going to want to play that game,” Klopfer says. “The second one, they were like, boys play Pokemon. Girls aren’t going to want to play that. And we found in fact that boys and girls equally engaged in them. We had high school boys on the verge of tears because their virtual birds had died.”

For reasons such as this, the Education Arcade researchers emphasize that a rote approach to design is likely to fail. It is better for designers to pursue a game topic that they find fascinating and hope others will as well.

“You kind of have to see it as an art project,” says Haas, a game designer and PhD candidate at the MIT Media Lab. “You have to feel this is something that people could fall in love with.”

Still, “Resonant Games” is filled with organizing principles for thinking about educational games, including four major ones the authors list at the start. The notion that we should “honor the whole learner,” for instance, means we should remember that learners are “full human beings with a range of passions, likes, and dislikes,” who often need to be pulled in with interesting stories, puzzles, and challenges.

“People love solving problems,” Osterweil observes. “People tend to tune out when the problem seems too big or too obscure. But if you can make a problem graspable, people tend to want to solve it. And that’s what we’re trying to harness.”

Other scholars in the discipline have praised the book. Jan L. Plass, a professor in digital media and learning sciences at New York University, has called it a “highly original book” and a “very valuable resource” for other designers. Still, as the authors note, the Education Arcade team does not claim to have all the answers for creating fun, fulfilling educational games. But they can at least suggest how other designers can find success.

“The future we imagine,” Osterweil says, “is not one where our game becomes the math game for every middle schooler, but rather a whole universe of possibilities so that kids can find themselves in any number of meaningful experiences.”