Through MIT App Inventor, Abelson aims to show children how they can use technology to shape their world.
Abby Abazorius
Publication Date:
Press Inquiries 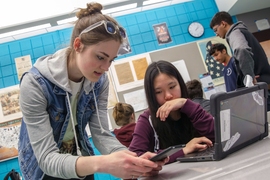 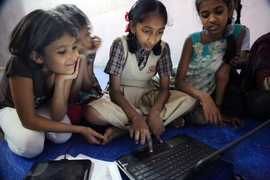 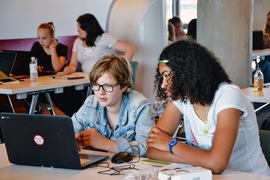 Hal Abelson, the Class of 1922 Professor in the Department of Electrical Engineering in Computer Science, has long been dedicated to democratizing access to technology for children. In the 1970s, he directed the first implementation of the educational programming language Logo for the Apple II computer. During a sabbatical at Google in 2007, he launched App Inventor, a web-based, visual-programming environment that allows children to develop applications for smartphones and tablets. The platform was transferred to MIT in 2010, where it now has over 1 million active users a month, who hail from 195 countries.

As new technologies are rapidly developed and introduced, Abelson feels it is crucial to introduce children to computer science through hands-on learning activities so that they have a better understanding of how they can use and create such technologies. MIT News spoke with Abelson about MIT App Inventor and how it helps kids have an impact on people and communities around the world.

Q: How did you get the idea for App Inventor, and what did you want it to achieve?

A: It’s crucial that we teach children how they can use technology to become informed and empowered citizens. Everyone is reacting to the enormous influence of computing, in particular how mobile technology has changed everyone’s lives. The question is, can people, in particular children, use mobile technology as a source for becoming informed and a source for becoming empowered? Do they see it as something that they can shape? Or is it purely going to be a consumer product that people react to?

I got the idea for App Inventor when I started thinking about how kids really weren’t using desktop computers anymore, and the real empowerment opportunities in the realm of computer science and technology nowadays are with smartphones. I thought to myself, “Why don’t we launch an initiative to make it possible for kids to make original applications for mobile phones?” When we started App Inventor, smartphones were just coming onto the market, and the notion that kids could be building applications for these devices was a little crazy.

Q: What are some of your favorite applications that kids have created using App Inventor?

A: The goal of App Inventor is to enable kids to participate in what I am referring to as computational action, which means building things that can actually have an impact on you, your family, and your country. We have some great examples of how students are using the platform to not only improve their own lives, but also the lives of the people around them.

One of my favorites apps was developed by a group of young women in Dharavi, which is located in India and is one of the largest slums in the world. These young women are creating apps aimed at improving the lives of their community. One of the apps that they created allows families to schedule time at the community water distribution site, reducing conflicts over access.

Another one that I love was created by a group of high-school girls in Moldova. Moldova has a water quality problem, so this group of students built an application that allows people to provide and access information about water quality around the country. For example, if you’re in Moldova and you go to a source of water, you can take out your phone and upload a picture of the water and information about its quality to the platform. This information is entered into a database that is accessible across the entire nation.

Thanks to this app, if you are driving around Moldova and are wondering if there is a good source of water in the area, you can use the application to find a safe source of drinking water. It’s pretty amazing to think about how four high school students have set up a national, geographic database that allows people to access clean water. This would not have been possible eight years ago, but now students are able to create something like this because there is an incredible technological infrastructure that allows people to do all sorts of amazing things.

Another app I love was created by a couple of kids in junior high school who were worried about bullying. It’s a really simple app that you can download with your friends. It works like this: If you are in the cafeteria and you are worried someone is going to come over and bully you, you press a button, which sends a message to your friends and alerts them to the fact that you need someone to come sit with you in the cafeteria because you are worried about being bullied. It’s really simple, but really effective.

Q: The App Inventor team recently participated in an event with the Cambridge Public Schools called “Freshman Technology Experience,” which was aimed at inspiring more — and more diverse students — to explore computer science. Can you talk about why you decided to participate?

A: Currently the App Inventor team is trying to get more involved with kids in the local area. Partly this is aimed at allowing us to conduct some of the initial testing of the new features we are developing for App Inventor. But it’s also about allowing the App Inventor team a greater ability to interact and work with local kids. If you’re involved in this project, part of the reason why is because you are interested in working with kids, so it’s great to be able to go out into the community and see kids using the platform and help them build stuff.

Even though App Inventor right now is focused on empowering kids to create technology for smartphones and tablets, I feel it should be emblematic of all the changes in technology that are available. Just in the past few years, new smart-home technologies like Alexa and Google Home have been developed that are now becoming widely integrated into people’s everyday existence. We have to think about how could kids be empowered around this emerging area of technology and how kids could help shape these new technologies.

It’s really important that we take the opportunity to educate kids about how to use technology. It doesn’t matter whether it’s kids or our representatives in Congress, in the long run it’s dangerous to our democracy if you have such powerful tools that people don’t understand. It’s particularly important that kids get this sense that technology is something they can shape. Even if they never go off and become programmers or do anything in the field of computer science, it’s important they understand that technology is something that they could influence or control.