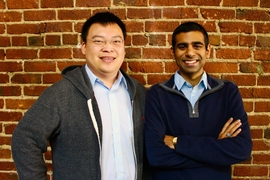 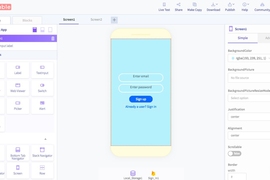 More than 1.5 million mobile apps with around 16 million monthly active users have been created on Thunkable, a platform that grew out of MIT. The apps were designed to do things like educate, entertain, and turn a profit — and they were all built without writing a single line of code.

That’s because Thunkable offers an intuitive drag-and-drop system that allows noncoders to build robust mobile apps that work across Apple and Android devices. The company’s tools allow anyone to build professional-grade apps, and the results prove developers aren’t the only people with great ideas.

Popular apps on the platform include a highway alert sytem for roadways in Thailand, an app that helps Iraqis learn English, and a dice-rolling app made by two Oregon teenagers that’s been downloaded more than half a million times.

“There are so many needs people have that can be solved by the incredible computers they have in their pockets all the time — their smartphones — yet because they can’t program them, they’re left to be passive consumers of this technology rather than active creators,” says Thunkable CEO and co-founder Arun Saigal ’13 SM ’13. “For us to be able to turn them into active creators has been an incredible experience.”

Since founding the company in 2015, Saigal and co-founder WeiHua Li ’14 SM ’16 have found success by letting customer feedback guide their development process. But the story of the company really begins with a project called MIT App Inventor.

A project with potential

In 2009, Hal Abelson, the Class of 1922 Professor of Computer Science and Engineering, partnered with Google to start a project called App Inventor that would make it easier for people who can’t code to create mobile apps for Android devices. App Inventor is geared toward teaching young people how to create digital solutions, and the team behind the program also conducts research and performs educational outreach.

Saigal started working on App Inventor as an undergraduate at MIT. The project was later renamed MIT App Inventor when the Institute took on full responsibility for maintaining it under the Media Lab’s Center for Mobile Learning.

In 2011, Li began working on MIT App Inventor along with Saigal, and they watched the project turn into one of the largest app-development platforms in the world for nondevelopers, boasting more than 6 million registered users.

“It grew to be large enough that we said this is no longer just a cool research project,” Saigal recalls. “We saw that it was being used way beyond teaching kids to code at a small scale. It became such a large-scale project, we decided to take it out of research and try to build on top of it.”

With the support of Abelson, who is a member of the MIT Council on Educational Technology, the founders began interviewing and surveying MIT App Inventor users. Saigal says their research came down to asking users three simple questions: “Who are you?” “Why are you using us?” And finally, “What do you need?”

The founders learned that while the project satisfied many users, there was a large group who wanted the functionality to build professional-grade apps for both Apple and Android devices.

In 2015, they started from scratch and built a new platform, then slowly added features users were asking for, first with new design options and later with monetization capabilities through integrations with ad engines and the payment service Stripe.

Saigal and Li entered the accelerator Y Combinator in January of 2016 and publicly launched Thunkable later that year. They’ve been releasing a steady stream of features and integrations ever since, allowing users to leverage services such as speech to text, Google Maps, and Microsoft AI in their creations. In June of 2018, the company released a platform called Thunkable ✕ that allows users to build mobile apps that work on both Android and iOS.

Development power to the people

During the civil war in Yemen, large swaths of the country’s electrical grid have been knocked offline. Yemeni resident Anwar Al-Haddad saw that while thousands of people were turning to solar power for their homes and businesses, operating individual solar systems wasn’t intuitive or easy.

So he built an app using Thunkable that explains where to buy solar panels and how to install them. Users can even control the tilt of their solar panels through the app, based on the position of the sun. Since it’s launch in 2015, the app has since been downloaded hundreds of thousands of times.

Anwar’s experience is just one of many where Thunkable users are solving problems in their community by building digital tools. That success has led to a collaborative environment on Thunkable’s community page, which looks like a hybrid of a GitHub forum and a Facebook feed. Users share their work and success stories on the page and, crucially, help others having problems.

“One of the greatest assets we have is our community,” Saigal says. “It’s probably our favorite investment so far. And it’s one of our biggest differentiators, the fact that you have a set of resources and people across the world who speak different languages and will help you at any time of the day.”

Ultimately, Saigal believes mobile technology will only realize its full potential for helping people when anyone can build an app to solve their problems.

“I’m a software engineer, and [before Thunkable] I could only solve one problem at a time,” Saigal says. “But what’s so fun for us is, by building the platform, we’re enabling people to solve their own problems in their own communities that we don’t even know about. We’re giving folks the power to change their lives, and allowing millions of problems to be solved simultaneously by the people closest to those problems. That’s why we’re so excited about this.”

Arun Saigal SB ’13, MEng ’13 and WeiHua Li ’BS ’14 MA ’15 co-founded Thunkable, an online platform developed to make building mobile apps easier, writes Ingrid Lunden for TechCrunch. “Saigal said that its initial focus was on consumers, which in itself is another big concept of the moment, that of the creator economy and users – not professional publishers and others – creating the content that the mass market is consuming,” writes Lunden.

MIT brainpower highlighted in Forbes’ 30 Under 30 lists for 2018