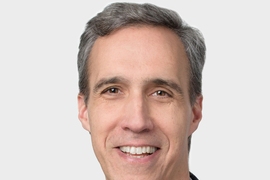 ↓ Download Image
Caption: Dan Huttenlocher has been named as the first dean of the MIT Stephen A. Schwarzman College of Computing.

Dan Huttenlocher SM ’84, PhD ’88, a seasoned builder and leader of new academic entities at Cornell University, has been named as the first dean of the MIT Stephen A. Schwarzman College of Computing. He will assume his new post this summer.

A member of Cornell’s computer science faculty since 1988, Huttenlocher has served since 2012 as the founding dean of Cornell Tech, a graduate school in New York City that focuses on digital technology and its economic and societal impacts. Previously, he helped create and then led Cornell’s Faculty of Computing and Information Science.

Huttenlocher returns to MIT with widely published scholarship in computer science, as well as a strongly interdisciplinary approach to computing. He also brings extensive background in industry: Huttenlocher served for 12 years as a scientist at Xerox’s Palo Alto Research Center (PARC) before leaving to co-found a financial technology company in 2000. He currently chairs the board of the John D. and Catherine T. MacArthur Foundation, and sits on the boards of directors of Amazon and Corning.

Huttenlocher’s appointment was announced this morning by Provost Martin Schmidt in a letter to the MIT community.

“The College of Computing represents a pivotal new chapter in MIT’s perpetual effort to reinvent itself in order to live up to its mission,” Schmidt wrote. “As we take on this Institute-wide challenge, I believe we are very fortunate to have, in Dan, such an inspiring and collaborative leader — someone equipped to ensure a strong beginning for the College and to lay a foundation for its lasting success. I very much look forward to working with Dan as he takes on this new challenge.”

The MIT Schwarzman College of Computing was announced last October as a $1 billion commitment to addressing the opportunities and challenges presented by the prevalence of computing and the rise of artificial intelligence. The initiative aims to reorient MIT to bring the power of computing and artificial intelligence to all fields of study, and to educate students in every discipline to responsibly use and develop these technologies. The college is slated to open in September 2019.

“MIT Schwarzman College is an ambitious experiment in educating the leaders society needs to navigate the algorithmic future,” says MIT President L. Rafael Reif. “For its founding dean, we looked for someone who combined educational creativity, instinctive collegiality, intellectual depth and breadth, institutional savvy, and industry experience. In Dan Huttenlocher, we found all these qualities — along with the signature MIT combination of boldness, enthusiasm, and humility. I'm eager to work with Dan, and I look forward to seeing how he leads our community through the college’s ongoing evolution.”

Huttenlocher holds two degrees from the Institute: In 1984, he earned a master’s degree in electrical engineering and computer science, and in 1988, he earned his PhD in computer science from the Artificial Intelligence Laboratory — a precursor to today’s Computer Science and Artificial Intelligence Laboratory (CSAIL). Huttenlocher sees it as an honor to return to the Institute in a leadership position, especially at a time when computing is evolving rapidly, producing new opportunities and challenges.

“MIT has a bold vision for rethinking computing-related research and education to respond to today’s and tomorrow’s challenges and opportunities,” Huttenlocher says. “The Institute plays a unique role in American and global higher education, and it’s exciting to be coming back to the place where I did my formative research work. I’ve learned a lot from MIT, and the world has changed a lot. If I can help contribute to the ways MIT wants to change in this new world, that is an amazing honor.”

Huttenlocher earned a bachelor’s degree from the University of Michigan in 1980, double-majoring in computer and communication sciences and experimental psychology. In recent years, he has served on two MIT visiting committees, one for Undergraduate and Graduate Programs and the other for the MIT Media Lab.

Since 2018, Huttenlocher has chaired the board of the John D. and Catherine T. MacArthur Foundation, a Chicago-based global foundation with assets of more than $6 billion.

“In the eight years that I have known Dan, as board member and now chair, he has proven himself to be intellectually curious, always respectful, and deeply supportive, especially of work that is both innovative and rigorous,” says Julia Stasch, president of the John D. and Catherine T. MacArthur Foundation. “He challenges us to be pragmatic and to be bold, and to move with the urgency that these times require. He is engaged in all that we do, from criminal justice and journalism to climate solutions, but we have especially benefitted from his wise counsel as we consider, across every area of work, ethical and social considerations in the inevitable and increasing use of technology.”

Huttenlocher has taught computer science, business and management, and information science courses at Cornell. In 1998, he chaired the task force that created Cornell’s interdisciplinary Faculty of Computing and Information Science (CIS) in Ithaca. In 2009, he was named dean of CIS; as dean, he helped bring statistics and computing closer together at Cornell, and led the development of Gates Hall as the new home for CIS.

In 2012, Huttenlocher was named founding dean and vice provost of Cornell Tech, a new graduate school focused on technology, business, law, and design, located on Roosevelt Island in the East River between Manhattan and Queens.

Cornell Tech arose from a competition, launched in 2010 by then-New York Mayor Michael Bloomberg, that aimed to build a new applied sciences campus on one of several sites in the city. In 2011, a joint proposal by Cornell and Technion-Israel Institute of Technology was selected from among seven formal proposals. Construction began on the 12-acre campus in 2014, and the first three buildings opened in 2017.

As dean and vice provost of Cornell Tech, Huttenlocher has honed his interdisciplinary approach to computing, fostering education at the intersection of computer science and areas including financial technology, media studies, health care, and urban planning. He built a multidisciplinary faculty — in computer science and engineering, as well as law, management, and design — to shape the school’s curriculum, and has established close ties with industry, nonprofits, government agencies, and investors. Under his leadership, the Cornell Tech curriculum has married computer science with practical application to the workforce and tech startups, creating several new degrees along the way.

Huttenlocher’s own research is broad, spanning algorithms, social media, and computer vision. He’s earned the Longuet-Higgins Award for Fundamental Advances in Computer Vision (2010), and various fellowships and awards from the National Science Foundation, the Association for Computing Machinery, IEEE, and Phi Beta Kappa, the oldest academic honor society in the United States. Throughout his teaching career, Huttenlocher has earned numerous teaching awards, including both the Stephen H. Weiss Fellowship and a Faculty of the Year Award at Cornell, and the New York State Professor of the Year award in 1993.

Huttenlocher believes it is important to help train students to be enterprising, which he sees as “thinking and executing bigger and better,” whether in an entrepreneurial, corporate, government, nonprofit, or academic setting. “It’s about making sure students are prepared to take advantage of the digital age — where you can build things that have a big impact in relatively short order with relatively small groups,” he says.

Huttenlocher himself co-founded a financial technology company, Intelligent Markets, in 2000, remaining involved for six years; the company was later sold to SunGard Financial Systems. After that experience, and helping to launch Cornell Tech, Huttenlocher says he doesn’t subscribe to inflexible visions: Many times, he says, ideas change as an entity evolves.

As dean of the MIT Schwarzman College of Computing, Huttenlocher will aim to educate students on the new societal challenges posed by artificial intelligence and automated decision-making, focusing on ethical questions pertaining to data, algorithms, and computing in general.

With the MIT Schwarzman College of Computing poised to begin hiring 50 new faculty members whose research links computer science with other academic fields, Huttenlocher says, “That’s one of the most exciting parts of this new role: looking at people who can think about research from a computing perspective, and from other perspectives, to understand how computing influences work in other disciplines and how work in other disciplines influences computing.”

“These fields are evolving,” he adds. “MIT needs to not only lead in those areas, but also in their evolution — much as engineering itself evolved a lot 150 years ago, in the early years of the Institute.”

As dean, Huttenlocher will build upon the efforts of five working groups, announced this month by Provost Schmidt. These working groups will begin to give shape to the new college’s organizational structure, faculty appointments, curriculum and degrees, focus on social implications and responsibilities, and infrastructure. The working groups — guided by a steering committee that includes the provost, Dean of Engineering Anantha Chandrakasan, and MIT Faculty Chair Susan Silbey — will aim to produce a report describing their thoughts on these important issues by May.

Writing for The Atlantic, Daniel Huttenlocher, dean of the MIT Schwarzman College of Computing, examines the potential impacts of AI on human culture, history and civilization. “We should accept that AI is bound to become increasingly sophisticated and ubiquitous, and ask ourselves: How will its evolution affect human perception, cognition, and interaction? What will be its impact on our culture and, in the end, our history?”

Writing for The Atlantic, Daniel Huttenlocher, dean of the MIT Schwarzman College of Computing, examines the potential impacts of AI on human culture, history and civilization. “We should accept that AI is bound to become increasingly sophisticated and ubiquitous, and ask ourselves: How will its evolution affect human perception, cognition, and interaction? What will be its impact on our culture and, in the end, our history?”

FAQ on the newly established MIT Stephen A. Schwarzman College of Computing