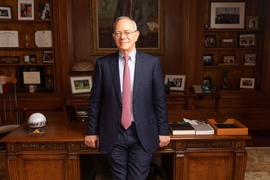 AI promises to help “humanity learn more, waste less, work smarter, live longer and better understand and predict almost anything that can be measured,” Reif writes. But with great power comes great responsibility: New technologies could pose serious risks, he says, “including threats to privacy, public safety, jobs and the security of nations.”

Countries around the world have started heavily investing in national AI initiatives, with China alone spending a reported $1 billion annually. To say competitive, Reif says, the U.S. must commit to at least a decade of sustained financial support for rising researchers and new academic centers across the nation.

But with the looming “opportunity and threat” of AI advancements, he says, higher education must be prepared to guide students through new ethical and cultural issues, especially as computer science seeps into other fields of study. At MIT, for instance, 40 percent of students major in computer science alone or paired with other subjects, such as molecular biology, economics, and urban planning. Higher education must now teach students to become “AI bilingual,” Reif says.

The op-ed comes on the heels of several of MIT’s major investments in AI, most recently the MIT Stephen A. Schwarzman College of Computing. Announced in October, the new college aims to educate the leaders of the AI future, with a particular focus on research and education on the ethical implications and societal impact of computing technologies. Other initiatives include the MIT­–IBM Watson AI Lab launched in late 2017 and the MIT Quest for Intelligence launched last February.

Reif concludes his piece with a call for a “broad strategic effort across society” in dealing with AI. “Technology belongs to all of us,” he says. “We must all be alert to the risks posed by AI, but this is no time to be afraid. Those nations and institutions which act now to help shape the future of AI will help shape the future for us all.”

In an article for the Financial Times, President L. Rafael Reif calls for government investment in AI research, and educational offerings that integrate the study of AI into every discipline. “Those nations and institutions which act now to help shape the future of AI will help shape the future for us all,” writes Reif.