3 Questions: How to control biofilms in space

MIT and University of Colorado researchers are collaborating on an experiment to be sent to the International Space Station.
David L. Chandler | MIT News Office
Publication Date:
Press Inquiries 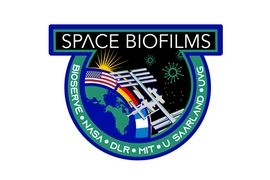 ↓ Download Image
Caption: NASA’s official mission patch for the upcoming space biofilms experiment, developed at MIT and the University of Colorado, which is scheduled to be sent to the International Space Station.
Credits: Image courtesy of the researchers.

Caption:
NASA’s official mission patch for the upcoming space biofilms experiment, developed at MIT and the University of Colorado, which is scheduled to be sent to the International Space Station.
Credits:
Image courtesy of the researchers.

Researchers from MIT will be collaborating with colleagues at the University of Colorado at Boulder on an experiment scheduled to be sent to the International Space Station (ISS) on Nov. 2. The experiment is looking for ways to address the formation of biofilms on surfaces within the space station. These hard-to-kill communities of bacteria or fungi can cause equipment malfunctions and make astronauts sick. MIT News asked professor of mechanical engineering Kripa Varanasi and doctoral student Samantha McBride to describe the planned experiments and their goals.

Q: For starters, tell us about the problem that this research aims to address.

Varanasi: Biofilms grow on surfaces in space stations, which initially was a surprise to me. Why would they grow in space? But it’s an issue that can jeopardize the key equipment — space suits, water recycling units, radiators, navigation windows, and so on — and can also lead to human illness. It therefore needs to be understood and characterized, especially for long-duration space missions.

In some of the early space station missions like Mir and Skylab, there were astronauts who were getting sick in space. I don’t know if we can say for sure it’s due to these biofilms, but we do know that there have been equipment failures due to biofilm growth, such as clogged valves.

In the past there have been studies that show the biofilms actually grow and accumulate more in space than on Earth, which is kind of surprising. They grow thicker; they have different forms. The goal of this project is to study how biofilms grow in space. Why do they get all these different morphologies? Essentially, it’s the absence of gravity and probably other driving forces, convection for example.

We also want to think about remediation approaches. How could you solve this problem? In our current collaboration with Luis Zea at UC Boulder, we are looking at biofilm growth on engineered substrates in the presence and absence of gravity. We make different surfaces for these biofilms to grow on, and we apply some of our technologies developed in this lab, including liquid impregnated surfaces [LIS] and superhydrophobic nanotextured surfaces, and we looked at how biofilms grow on them. We found that after a year’s worth of experiments, here on Earth, the LIS surfaces did really well: There was no biofilm growth, compared to many other state of the art substrates.

Q: So what will you be looking for in this new experiment to be flown on the ISS?

McBride: There are signs indicating that bacteria might actually increase their virulence in space, and so astronauts are more likely to get sick. This is interesting because usually when you think of bacteria, you’re thinking of something that’s so small that gravity shouldn’t play that big a role.

Professor Cynthia Collin’s group at RPI [Rensselaer Polytechnic Institute] did a previous experiment on the ISS showing that when you have normal gravity, the bacteria are able to move around and form these mushroom-like shapes, versus in microgravity mobile bacteria form this kind of canopy shape of biofilm. So basically, they’re not as constrained any more and they can start to grow outward in this unusual morphology.

Our current work is a collaboration with UC Boulder and Luis Zea as the principal investigator. So now instead of just looking at how bacteria respond to microgravity versus gravity on Earth, we’re also looking at how they grow on different engineered substrates. And also, more fundamentally, we can see why bacteria biofilms form the way that they do on Earth, just by taking away that one variable of having the gravity.

There are two different experiments, one with bacterial biofilms and one with fungal biofilms. Zea and his group have been growing these organisms in a test media in the presence of those surfaces, and then characterizing them by the biofilm mass, the thickness, morphology, and then the gene expression. These samples will now be sent to the space station to see how they grow there.

Q: So based on the earlier tests, what are you expecting to see when the samples come back to Earth after two months?

Varanasi: What we’ve found so far is that, interestingly, a great deal of biomass grows on superhydrophobic surfaces, which is usually thought to be antifouling. In contrast, on the liquid-impregnated surfaces, the technology behind Liquiglide, there was basically no biomass growth. This produced the same result as the negative control, where there were no bacteria.

We also did some control tests to confirm that the oil used on the liquid impregnated surfaces is not biocidal. So we’re not just killing the bacteria, they’re actually just not adhering to the substrate, and they’re not growing there.

McBride: For the LIS surfaces, we’ll be looking at whether biofilms form on them or not. I think both results would be really interesting. If biofilms grow on these surfaces in space, but not on the ground, I think that’s going to tell us something very interesting about the behavior of these organisms. And of course, if biofilms don’t form and the surfaces prevent formation like they do on on the ground, then that’s also great, because now we have a mechanism to prevent biofilm formation on some of the equipment in the space station.

So we would be happy with either result, but if the LIS does perform as well as it did on the ground, I think it’s going to have a huge impact on future missions in terms of preventing biofilms and not getting people sick.

Fundamentally, from a science point of view, we want to understand the growth of these films and understand all of the biomechanical, biophysical, and biochemical mechanisms behind the growth. By adding the surface morphology, texture, and other properties like the liquid-impregnated surfaces, we may see new phenomena in the growth and evolution of these films, and maybe actually come up with a solution to fix the problem.

Varanasi: And then that can lead to designing new equipment or even space suits that have these features. So that’s where I think we would like to learn from this and then propose solutions.