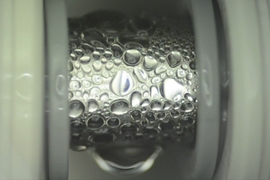 ↓ Download Image
Caption: Specialized thin coatings developed by the MIT team cause even low-surface-tension fluids to readily form droplets on the surface of a pipe, as seen here, which improves the efficiency of heat transfer.
Credits: Image courtesy of the researchers 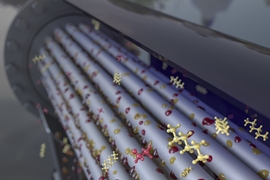 Caption:
Specialized thin coatings developed by the MIT team cause even low-surface-tension fluids to readily form droplets on the surface of a pipe, as seen here, which improves the efficiency of heat transfer.
Credits:
Image courtesy of the researchers

Unlike water, liquid refrigerants and other fluids that have a low surface tension tend to spread quickly into a sheet when they come into contact with a surface. But for many industrial processes it would be better if the fluids formed droplets, which could roll or fall off the surface and carry heat away with them.

Now, researchers at MIT have made significant progress in promoting droplet formation and shedding in such fluids. This approach could lead to efficiency improvements in many large-scale industrial processes including refrigeration, thus saving energy and reducing greenhouse gas emissions.

Over the years, Varanasi and his collaborators have made great progress in improving the efficiency of condensation systems that use water, such as the cooling systems used for fossil-fuel or nuclear power generation. But other kinds of fluids — such as those used in refrigeration systems, liquification, waste heat recovery, and distillation plants, or materials such as methane in oil and gas liquifaction plants — often have very low surface tension compared to water, meaning that it is very hard to get them to form droplets on a surface. Instead, they tend to spread out in a sheet, a property known as wetting.

But when these sheets of liquid coat a surface, they provide an insulating layer that inhibits heat transfer, and easy heat transfer is crucial to making these processes work efficiently. “If it forms a film, it becomes a barrier to heat transfer,” Varanasi says. But that heat transfer is enhanced when the liquid quickly forms droplets, which then coalesce and grow and fall away under the force of gravity. Getting low-surface-tension liquids to form droplets and shed them easily has been a serious challenge.

In condensing systems that use water, the overall efficiency of the process can be around 40 percent, but with low-surface-tension fluids, the efficiency can be limited to about 20 percent. Because these processes are so widespread in industry, even a tiny improvement in that efficiency could lead to dramatic savings in fuel, and therefore in greenhouse gas emissions, Varanasi says.

By promoting droplet formation, he says, it’s possible to achieve a four- to eightfold improvement in heat transfer. Because the condensation is just one part of a complex cycle, that translates into an overall efficiency improvement of about 2 percent. That may not sound like much, but in these huge industrial processes even a fraction of a percent improvement is considered a major achievement with great potential impact. “In this field, you’re fighting for tenths of a percent,” Khalil says.

Unlike the surface treatments Varanasi and his team have developed for other kinds of fluids, which rely on a liquid material held in place by a surface texture, in this case they were able to accomplish the fluid-repelling effect using a very thin solid coating — less than a micron thick (one millionth of a meter). That thinness is important, to ensure that the coating itself doesn’t contribute to blocking heat transfer, Khalil explains.

The coating, made of a specially formulated polymer, is deposited on the surface using a process called initiated chemical vapor deposition (iCVD), in which the coating material is vaporized and grafts onto the surface to be treated, such as a metal pipe, to form a thin coating. This process was developed at MIT by Gleason and is now widely used.

The authors optimized the iCVD process by tuning the grafting of coating molecules onto the surface, in order to minimize the pinning of condensing droplets and facilitate their easy shedding. The process could be carried out on location in industrial-scale equipment, and could be retrofitted into existing installations to provide a boost in efficiency. The process is “materials agnostic,” Khalil says, and can be applied on either flat surfaces or tubing made of stainless steel, titanium, or other metals commonly used in condensation heat-transfer processes that involve these low-surface-tension fluids. “Whatever materials are used in your facility's heat exchanger, it tends to be scalable with this process,” he adds.

Video shows the condensation of pentane, a low-surface-tension fluid. On the left, streaking of drops impair heat transfer, while pentane with the new coating, at right, shows high droplet formation and good heat transfer.

The net result is that on these surfaces, condensing fluids like the hydrocarbons pentane or liquid methane, or alcohols like ethanol, will readily form small droplets that quickly fall off the surface, making room for more to form, and in the process shedding heat from the metal to the droplets that fall away.

One area where such coatings could play a useful role, Varanasi says, is in organic Rankine cycle systems, which are widely used for generating power from waste heat in a variety of industrial processes. “These are inherently inefficient systems,” he says, “but this could make them more efficient.”

The new coating is shown promoting condensation on a titanium surface, a material widely used in industrial heat exchangers.

“This new approach to condensation is significant because it promotes drop formation (rather than film formation) even for low-surface-tension fluids, which significantly improves the heat transfer efficiency,” says Jonathan Boreyko, an assistant professor of mechanical engineering at Virginia Tech, who was not connected to this research. While the iCVD process itself is not new, he says, “showing here that it can be used even for the condensation of low-surface-tension fluids is of significant practical importance, as many real-life phase-change systems do not use water.”

Saying the work is “of very high quality,” Boreyko adds that “simply showing for the first time that a thin, durable, and dry coating can promote the dropwise condensation of low-surface-tension fluids is very important for a wide variety of practical condenser systems.”