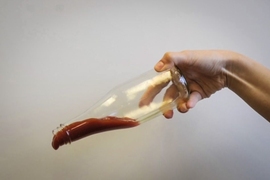 ↓ Download Image
Caption: Ketchup slides out of a bottle that's been coated with LiquiGlide.
Credits: Courtesy of the Varanasi Research Group

Caption:
Ketchup slides out of a bottle that's been coated with LiquiGlide.
Credits:
Courtesy of the Varanasi Research Group

The days of wasting condiments — and other products — that stick stubbornly to the sides of their bottles may be gone, thanks to MIT spinout LiquiGlide, which has licensed its nonstick coating to a major consumer-goods company.

Developed in 2009 by MIT’s Kripa Varanasi and David Smith, LiquiGlide is a liquid-impregnated coating that acts as a slippery barrier between a surface and a viscous liquid. Applied inside a condiment bottle, for instance, the coating clings permanently to its sides, while allowing the condiment to glide off completely, with no residue.

In 2012, amidst a flurry of media attention following LiquiGlide’s entry in MIT’s $100K Entrepreneurship Competition, Smith and Varanasi founded the startup — with help from the Institute — to commercialize the coating.

Today, Norwegian consumer-goods producer Orkla has signed a licensing agreement to use the LiquiGlide’s coating for mayonnaise products sold in Germany, Scandinavia, and several other European nations. This comes on the heels of another licensing deal, with Elmer’s, announced in March.

But this is only the beginning, says Varanasi, an associate professor of mechanical engineering who is now on LiquiGlide’s board of directors and chief science advisor. The startup, which just entered the consumer-goods market, is courting deals with numerous producers of foods, beauty supplies, and household products. “Our coatings can work with a whole range of products, because we can tailor each coating to meet the specific requirements of each application,” Varanasi says.

Apart from providing savings and convenience, LiquiGlide aims to reduce the surprising amount of wasted products — especially food — that stick to container sides and get tossed. For instance, in 2009 Consumer Reports found that up to 15 percent of bottled condiments are ultimately thrown away. Keeping bottles clean, Varanasi adds, could also drastically cut the use of water and energy, as well as the costs associated with rinsing bottles before recycling. “It has huge potential in terms of critical sustainability,” he says.

Varanasi says LiquiGlide aims next to tackle buildup in oil and gas pipelines, which can cause corrosion and clogs that reduce flow. Future uses, he adds, could include coatings for medical devices such as catheters, deicing roofs and airplane wings, and improving manufacturing and process efficiency. “Interfaces are ubiquitous,” he says. “We want to be everywhere.”

Learn the science behind LiquiGlide's permanently wet coating and see it in action.

LiquiGlide was originally developed while Smith worked on his graduate research in Varanasi’s research group. Smith and Varanasi were interested in preventing ice buildup on airplane surfaces and methane hydrate buildup in oil and gas pipelines.

Some initial work was on superhydrophobic surfaces, which trap pockets of air and naturally repel water. But both researchers found that these surfaces don’t, in fact, shed every bit of liquid. During phase transitions — when vapor turns to liquid, for instance — water droplets condense within microscopic gaps on surfaces, and steadily accumulate. This leads to loss of anti-icing properties of the surface. “Something that is nonwetting to macroscopic drops does not remain nonwetting for microscopic drops,” Varanasi says.

Inspired by the work of researcher David Quéré, of ESPCI in Paris, on slippery "hemisolid-hemiliquid" surfaces, Varanasi and Smith invented permanently wet “liquid-impregnated surfaces" — coatings that dont have such microscopic gaps. The coatings consist of textured solid material that traps a liquid lubricant through capillary and intermolecular forces. The coating wicks through the textured solid surface, clinging permanently under the product, allowing the product to slide off the surface easily; other materials can’t enter the gaps or displace the coating. “One can say that it’s a self-lubricating surface,” Varanasi says.

Mixing and matching the materials, however, is a complicated process, Varanasi says. Liquid components of the coating, for instance, must be compatible with the chemical and physical properties of the sticky product, and generally immiscible. The solid material must form a textured structure while adhering to the container. And the coating can’t spoil the contents: Foodstuffs, for instance, require safe, edible materials, such as plants and insoluble fibers.

To help choose ingredients, Smith and Varanasi developed the basic scientific principles and algorithms that calculate how the liquid and solid coating materials, and the product, as well as the geometry of the surface structures will all interact to find the optimal “recipe.”

Today, LiquiGlide develops coatings for clients and licenses the recipes to them. Included are instructions that detail the materials, equipment, and process required to create and apply the coating for their specific needs. “The state of the coating we end up with depends entirely on the properties of the product you want to slide over the surface,” says Smith, now LiquiGlide’s CEO.

Having researched materials for hundreds of different viscous liquids over the years — from peanut butter to crude oil to blood — LiquiGlide also has a database of optimal ingredients for its algorithms to pull from when customizing recipes. “Given any new product you want LiquiGlide for, we can zero in on a solution that meets all requirements necessary,” Varanasi says.

MIT: A lab for entrepreneurs

For years, Smith and Varanasi toyed around with commercial applications for LiquiGlide. But in 2012, with help from MIT’s entrepreneurial ecosystem, LiquiGlide went from lab to market in a matter of months.

Initially the idea was to bring coatings to the oil and gas industry. But one day, in early 2012, Varanasi saw his wife struggling to pour honey from its container. “And I thought, ‘We have a solution for that,’” Varanasi says.

The focus then became consumer packaging. Smith and Varanasi took the idea through several entrepreneurship classes — such as 6.933 (Entrepreneurship in Engineering: The Founder’s Journey) — and MIT’s Venture Mentoring Service and Innovation Teams, where student teams research the commercial potential of MIT technologies.

“I did pretty much every last thing you could do,” Smith says. “Because we have such a brilliant network here at MIT, I thought I should take advantage of it.”

That May, Smith, Varanasi, and several MIT students entered LiquiGlide in the MIT $100K Entrepreneurship Competition, earning the Audience Choice Award — and the national spotlight. A video of ketchup sliding out of a LiquiGlide-coated bottle went viral. Numerous media outlets picked up the story, while hundreds of companies reached out to Varanasi to buy the coating. “My phone didn’t stop ringing, my website crashed for a month,” Varanasi says. “It just went crazy.”

That summer, Smith and Varanasi took their startup idea to MIT’s Global Founders’ Skills Accelerator program, which introduced them to a robust network of local investors and helped them build a solid business plan. Soon after, they raised money from family and friends, and won $100,000 at the MassChallenge Entrepreneurship Competition.

When LiquiGlide Inc. launched in August 2012, clients were already knocking down the door. The startup chose a select number to pay for the development and testing of the coating for its products. Within a year, LiquiGlide was cash-flow positive, and had grown from three to 18 employees in its current Cambridge headquarters.

Looking back, Varanasi attributes much of LiquiGlide’s success to MIT’s innovation-based ecosystem, which promotes rapid prototyping for the marketplace through experimentation and collaboration. This ecosystem includes the Deshpande Center for Technological Innovation, the Martin Trust Center for MIT Entrepreneurship, the Venture Mentoring Service, and the Technology Licensing Office, among other initiatives. “Having a lab where we could think about … translating the technology to real-world applications, and having this ability to meet people, and bounce ideas … that whole MIT ecosystem was key,” Varanasi says.

LiquiGlide, an MIT startup, has announced several new partnerships aimed at developing sustainable, zero-waste packaging solutions, reports Janelle Nanos for The Boston Globe. “LiquiGlide wants to fix one of life’s longstanding frustrations: trying to squeeze out the end of a toothpaste tube,” writes Nanos. “Since it’s often difficult to empty out sticky pastes, gels, and creams, hundreds of millions of dollars worth of those substances are discarded annually, still stuck to the insides of their containers.”

Prof. Kripa Varanasi speaks with Boston 25 reporter Jim Morelli about a food-safe coating, called LiquiGlide, that makes it possible to squeeze every drop out of containers of items like ketchup and toothpaste. “It’s a universal kind of a problem,” Varanasi says. “The interface between the liquid and the solid is what makes these products stick to containers.”

Gizmodo reporter Andrew Liszewski writes that LiquiGlide, an MIT startup, is working with Colgate to introduce a “new recyclable toothpaste container that leverages LiquiGlide so that every last drop of the product can be squeezed out with minimal effort.”

Oscar Williams of The Huffington Post writes that MIT researchers have designed a coating that allows liquids to slid out of containers, which could cut down on food waste. “In packages there are about 40 billion packs with material stuck in packages so the technology has the potential to significantly reduce waste,” says MIT alumnus and LiquiGlide co-founder David Smith.

MIT startup LiquiGlide has announced that they are partnering with the international food packaging company Orkla to use their non-stick coating inside mayonnaise bottles, reports Katie Palmer for Wired. Palmer explains that LiquiGlide has “created an algorithm to optimize the thermodynamic relationships between a textured solid on the inside of the bottle, its liquid 'lubricant,' and the product in question.”

MIT spinout LiquiGlide has signed a deal with Orkla that will allow the company to use LiquiGlide’s non-stick coating in their mayonnaise bottles, reports Chris Foxx for the BBC. Foxx explains that a customized version of the LiquiGlide “coating is created for each product, resulting in a "permanently wet" surface inside containers that helps the product slip out.”

BetaBoston reporter Nidhi Subbaraman writes that MIT startup LiquiGlide has signed a deal with Orkla ASA to license LiquiGlide’s “slippery coatings for a brand of mayonnaise due to be launched in the next year in northern and central Europe.”