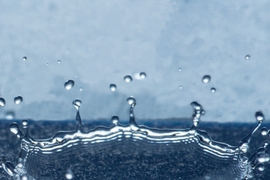 ↓ Download Image
Caption: Droplets that land on a specially prepared surface with tiny ring-shaped patterns splash upward in a bowl shape, as seen in this photo, instead of spreading out over the surface, thus minimizing the water’s contact with the surface.
Credits: Image: Henri-Louis Girard, Jim Bales, and Kripa Varanasi

Caption:
Droplets that land on a specially prepared surface with tiny ring-shaped patterns splash upward in a bowl shape, as seen in this photo, instead of spreading out over the surface, thus minimizing the water’s contact with the surface.
Credits:
Image: Henri-Louis Girard, Jim Bales, and Kripa Varanasi

In many situations, engineers want to minimize the contact of droplets of water or other liquids with surfaces they fall onto. Whether the goal is keeping ice from building up on an airplane wing or a wind turbine blade, or preventing heat loss from a surface during rainfall, or preventing salt buildup on surfaces exposed to ocean spray, making droplets bounce away as fast as possible and minimizing the amount of contact with the surface can be key to keeping systems functioning properly.

Now, a study by researchers at MIT demonstrates a new approach to minimizing the contact between droplets and surfaces. While previous attempts, including by members of the same team, have focused on minimizing the amount of time the droplet spends in contact with the surface, the new method instead focuses on the spatial extent of the contact, trying to minimize how far a droplet spreads out before bouncing away.

The new findings are described in the journal ACS Nano in a paper by MIT graduate student Henri-Louis Girard, postdoc Dan Soto, and professor of mechanical engineering Kripa Varanasi. The key to the process, they explain, is creating a series of raised ring shapes on the material’s surface, which cause the falling droplet to splash upward in a bowl-shaped pattern instead of flowing out flat across the surface.

The work is a followup on an earlier project by Varanasi and his team, in which they were able to reduce the contact time of droplets on a surface by creating raised ridges on the surface, which disrupted the spreading pattern of impacting droplets. But the new work takes this farther, achieving a much greater reduction in the combination of contact time and contact area of a droplet.

In order to prevent icing on an airplane wing, for example, it is essential to get the droplets of impacting water to bounce away in less time than it takes for the water to freeze. The earlier ridged surface did succeed in reducing the contact time, but Varanasi says “since then, we found there’s another thing at play here,” which is how far the drop spreads out before rebounding and bouncing off. “Reducing the contact area of the impacting droplet should also have a dramatic impact on transfer properties of the interaction,” Varanasi says.

The team initiated a series of experiments that demonstrated that raised rings of just the right size, covering the surface, would cause the water spreading out from an impacting droplet to splash upward instead, forming a bowl-shaped splash, and that the angle of that upward splash could be controlled by adjusting the height and profile of those rings. If the rings are too large or too small compared to the size of the droplets, the system becomes less effective or doesn’t work at all, but when the size is right, the effect is dramatic.

It turns out that reducing the contact time alone is not sufficient to achieve the greatest reduction in contact; it’s the combination of the time and area of contact that’s critical. In a graph of the time of contact on one axis, and the area of contact on the other axis, what really matters is the total area under the curve — that is, the product of the time and the extent of contact. The area of the spreading was “was another axis that no one has touched” in previous research, Girard says. “When we started doing so, we saw a drastic reaction,” reducing the total time-and-area contact of the droplet by 90 percent. “The idea of reducing contact area by forming ‘waterbowls’ has far greater effect on reducing the overall interaction than by reducing contact time alone,” Varanasi says.

As the droplet starts to spread out within the raised circle, as soon as it hits the circle’s edge it begins to deflect. “Its momentum is redirected upward,” Girard says, and although it ends up spreading outward about as far as it would have otherwise, it is no longer on the surface, and therefore not cooling the surface off, or leading to icing, or blocking the pores on a “waterproof” fabric.

The rings themselves can be made in different ways and from different materials, the researchers say — it’s just the size and spacing that matters. For some tests, they used rings 3-D printed on a substrate, and for others they used a surface with a pattern created through an etching process similar to that used in microchip manufacturing. Other rings were made through computer controlled milling of plastic.

While higher-velocity droplet impacts generally can be more damaging to a surface, with this system the higher velocities actually improve the effectiveness of the redirection, clearing even more of the liquid than at slower speeds. That’s good news for practical applications, for example in dealing with rain, which has relatively high velocity, Girard says. “It actually works better the faster you go,” he says.

In addition to keeping ice off airplane wings, the new system could have a wide variety of applications, the researchers say. For example, “waterproof” fabrics can become saturated and begin to leak when water fills up the spaces between the fibers, but when treated with the surface rings, fabrics kept their ability to shed water for longer, and performed better overall, Girard says. “There was a 50 percent improvement by using the ring structures,” he says.

The research was supported by MIT’s Deshpande Center for Technological Innovation.

Prof. Kripa Varanasi has developed a new hydrophobic surface that limits the spread of water droplets. The researchers etched a pattern of small rings onto the surface, which created a series of “water bowls” intended to “constrain the spread of droplets falling on them, thus encouraging the rapid ejection of those droplets back into the air,” reports The Economist.

MIT researchers have a developed a method to make liquid droplets bounce away faster on water-repellant surfaces. “Aside from reducing ice buildup on airplanes, or even the giant sweeping blades of a wind turbine, this research could also benefit waterproof garments, which are a big market for hydrophobic materials,” reports Andrew Liszewski of Gizmodo.