Drug manufacturing that’s out of this world 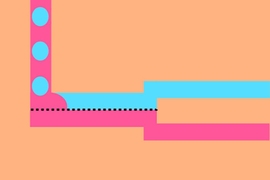 ↓ Download Image
Caption: In the continuous-flow liquid-liquid separator developed by MIT spinout Zaiput Flow Technologies, liquid mix (blue and pink) is pumped through a feed tube to a porous polymer membrane (dotted line). One liquid (pink) is drawn to the surface of the membrane, while the other (blue) is repelled. An internal mechanical pressure controller maintains a slight pressure differential between the two sides of the membrane. This pushes the attracted liquid through the membrane without the repelled one, sending each liquid through separate tubes.
Credits: Courtesy of Zaiput Flow Technologies

Caption:
In the continuous-flow liquid-liquid separator developed by MIT spinout Zaiput Flow Technologies, liquid mix (blue and pink) is pumped through a feed tube to a porous polymer membrane (dotted line). One liquid (pink) is drawn to the surface of the membrane, while the other (blue) is repelled. An internal mechanical pressure controller maintains a slight pressure differential between the two sides of the membrane. This pushes the attracted liquid through the membrane without the repelled one, sending each liquid through separate tubes.
Credits:
Courtesy of Zaiput Flow Technologies

Liquid-liquid separation and chemical extraction are key processes in drug manufacturing and many other industries, including oil and gas, fragrances, food, wastewater filtration, and biotechnology.

Having proved its efficacy on Earth, the separator is now being tested as a tool for manufacturing drugs and synthesizing chemicals in outer space.

In 2015, Zaiput won a Galactic Grant from the Center for the Advancement of Science in Space that allows companies to test technologies on the International Space Station (ISS). On Dec. 15, after two years of development and preparation, Zaiput launched its separator in a SpaceX rocket as part of the CRS-13 cargo resupply mission that will last one month.

As long-duration space travel and extraterrestrial habitation becomes a potential reality, it’s important to find ways to synthesize chemicals for drugs, food, fuels, and other products in space that may be important for those missions, says Zaiput co-founder and CEO Andrea Adamo SM ’03, who co-invented the separator in the lab of Klavs Jensen, the Warren K. Lewis Professor of Chemical Engineering. Notably, Zaiput’s separator, called SEP-10, separates liquids without the need for gravity, which is a trademark of traditional methods.

“When people go on deep space explorations, or maybe to Mars, these are multiyear missions,” Adamo says. “But how do you synthesize chemicals for drugs and other products without gravity? We have that answer. Testing our unit in space will show that what we have done on Earth is fully exportable to space.”

Results from the ISS experiments will prove that the device indeed functions in zero-gravity, which is basically impossible to verify on Earth. And, they will help the startup refine the device, Adamo says: “MIT strives for excellence and we inherited that model — we’re still striving for excellence.”

In traditional liquid-liquid separators, a mixture of two liquids of different densities is fed into a funnel-shaped settling tank. The heavier liquid sinks and can be drained out through a valve, away from the lighter liquid, which stays on top. But the separation process is time-consuming, and some chemicals can decay or become unstable while sitting in the tank.

Instead of leveraging gravity, Zaiput’s separator uses surface forces to attract or repel a liquid from a membrane. As an example, consider a nonstick pan: Oil spreads on the pan, but water beads up because it has an affinity to bond with the polymer covering the pan, while oil does not.

Zaiput’s separator uses the same principle. A mixture of liquids is pumped through a feed tube and travels to a porous polymer membrane. One liquid is drawn to the surface of the membrane, while the other is repelled. An internal mechanical pressure controller maintains a slight pressure differential between one side of the membrane and the other. This differential is just enough to push the attracted liquid through the porous membrane without pushing the repelled one. The attracted liquid then goes out through one tube, while allowing the repelled liquid to flow out through a separate tube. Flow rates range from 0 to 12 milliliters per minute.

“If you want to use this for a continuous operation in a reliable way, you have to carefully control pressure conditions across membranes,” Adamo says. “You want a little bit of pressure, so the chemical goes through, but not too much to push through the unwanted liquid. The internal controller ensures this happens at all times.”

Zaiput’s separator also improves chemical extraction, which is different from liquid separation. Imagine working with a mixture of wine and oil. Liquid separation means separating the mixture into individual flows, of wine and oil. Extraction, however, means removing the ethanol chemical from the wine, along with separating the liquids, which is of interest to chemists.

Zaiput units can be equipped with different types of membranes to achieve specific effects, or connected in a series of units.

Importantly, Adamo says, Zaiput’s continuous-flow, membrane-based separator allows for separation of emulsions, whereby small droplets of one liquid end up in the other liquid, never fully separating. “We don’t have that issue, because we don’t need to wait for liquids to settle,” Adamo says. “We are the only technology that provides continuous separation, can readily separate emulsions, and is also designed for safety, so if you’re dealing with explosive or toxic substances, you can process them quickly.”

Beautifying and scaling up

Adamo came to MIT in the early 2000s as a civil engineer. Conducting research at MIT and being exposed to the Institute’s entrepreneurial ecosystem, however, “changed my horizons,” he says. “I wanted to be in a field where I could bring technology to the world through a startup.”

Civil engineering had some limits in that regard, so Adamo started experimenting in the fast-moving field of microfluidics, working as a researcher in the lab of Jensen, a pioneer of flow chemistry. Inspired by Jensen’s previous research into surface forces, Adamo began designing a small, membrane-based separation device equipped with a precise pressure controller that maintained exact conditions for separation. This first prototype consisted of two bulky plastic pieces bolted together. “It was really ugly,” Adamo says.

But showcasing the prototype to colleagues at MIT, he found that despite its unaesthetic appearance, the device had commercial potential. “The innovation was not just good for the lab, but also for general public,” he says. “I started looking into business propositions.” (So far, the research has also produced two papers co-authored by Jensen, Adamo, and other MIT researchers in Industrial & Engineering Chemistry Research.)

The startup designed a far more appealing product. Growing up in Italy, Adamo says, he was always surrounded by beautiful, colorful scenery and objects. He used that background as inspiration for the separator’s design, turning the prototype into a series of handheld, colorful blocks. Lab units are orange; larger units are purple, gold, or lime green. There is also color coding for different devices that are made of different materials.

“Customers visit labs and these devices pop out,” Adamo says. “Function is key, but when you take an object in your hands, it has to feel nice. It has to be pleasing to the eye and, in a commercial sense, distinctive.”

Currently, Zaiput is developing a production-scale device with a flow rate of 3,000 milliliters per minute, for larger-scale drug manufacturing. The startup is also hoping to more efficiently tackle very complex chemical extractions. Today, this involves repeating chemical extraction processes multiple times in massive columns, about 100 feet high, to ensure as much of the target chemical has been extracted from a liquid. But Zaiput hopes it can do the same with a small system of combined modular units. Additionally, the startup hopes to bring the device to traditional batch-separation users, notably those who still work with settling tanks.

“The next challenges are bigger-scale development, more complex extraction, and reaching out to traditional users to empower them with new technologies,” Adamo says.