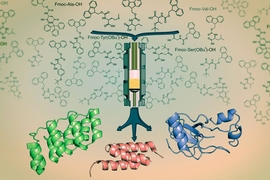 Small protein fragments, also called peptides, are promising as drugs because they can be designed for very specific functions inside living cells. Insulin and the HIV drug Fuzeon are some of the earliest successful examples, and peptide drugs are expected to become a $25 billion market by 2018.

However, a major bottleneck has prevented peptide drugs from reaching their full potential: Manufacturing the peptides takes several weeks, making it difficult to obtain large quantities, and to rapidly test their effectiveness.

That bottleneck may soon disappear: A team of MIT chemists and chemical engineers has designed a way to manufacture peptides in mere hours. The new system, described in a recent issue of the journal ChemBioChem, could have a major impact on peptide drug development, says Bradley Pentelute, an assistant professor of chemistry and leader of the research team.

“Peptides are ubiquitous. They’re used in therapeutics, they’re found in hydrogels, and they’re used to control drug delivery. They’re also used as biological probes to image cancer and to study processes inside cells,” Pentelute says. “Because you can get these really fast now, you can start to do things you couldn’t do before.”

The lead author of the paper is Mark Simon, a graduate student in Pentelute’s lab. Other authors include Klavs Jensen, head of MIT’s Department of Chemical Engineering, and Andrea Adamo, a research associate in chemical engineering.

Therapeutic peptides usually consist of a chain of 30 to 40 amino acids, the building blocks of proteins. Many universities, including MIT, have facilities to manufacture these peptides, but the process usually takes two to six weeks, using machines developed about 20 years ago.

These machines require about an hour to perform the chemical reactions needed to add one amino acid to a chain. To speed up the process, the MIT team adapted the synthesis reactions so they can be done in a continuous flow system. Using this approach, each amino acid addition takes only a few minutes, and an entire peptide can be assembled in little more than an hour.

The new system has storage vessels for each of the 20 naturally occurring amino acids, connected to pumps that pull out the correct one. As the amino acids flow toward the chamber where the reaction takes place, they travel through a coil where they are preheated to 60 degrees Celsius, which helps speed up the synthesis reaction.

This system produces peptides as pure as those produced with existing machines. “We’re on par with the world’s best state-of-the-art synthesis, but we can do it much faster now,” Pentelute says.

The system should make it easier to design and produce new peptides, says Philip Dawson, an associate professor of chemistry at the Scripps Research Institute who was not part of the research team. “What I like about it is the simplicity of the device and the thoughtfulness with which it was put together,” Dawson says. “I would look forward to trying it out in my lab.”

With this technology, scientists could design and rapidly test new peptides to treat cancer and other diseases, as well as more effective variants of existing peptides, such as insulin, Pentelute says. Another benefit of this high-speed approach is that any potential problems with a particular peptide synthesis can be detected much sooner, allowing the researchers to try to fix it right away.

Another area Pentelute plans to pursue is creating so-called “mirror-image” proteins. Nearly all proteins that exist in nature are made of L amino acids, whose structures have a right-handed orientation. Creating and studying peptides that are mirror images of these natural proteins could pave the way to developing such peptides as new drugs with completely different functions from the right-handed versions.

Technology with an impact

In a separate paper published in the same issue of ChemBioChem, the researchers demonstrated that they could use this technology not only to synthesize peptides, but also combine these to form large synthetic proteins. To demonstrate the technology, they created an antibody mimic that has 130 amino acids, as well as a 113-amino-acid enzyme produced by bacteria. Chemistry graduate students Surin Mong and Alexander Vinogradov are lead authors of that paper, along with Simon.

The researchers have patented the technology, and MIT’s Deshpande Center for Technological Innovation has given them a grant to help commercialize it. Pentelute says he believes that about 10 machines using the new technology would be enough to meet current demand, which is about 100,000 to 500,000 custom peptides per year.

Pentelute envisions that the technology could have an impact on synthetic biology comparable to rapid synthesis of short strands of DNA and RNA. These strands, known as oligonucleotides, take only a day or two to prepare and can be used to create custom genes to give cells new functions.

“That’s what our aim is — to have next-day or two-day delivery of these peptide units, to anyone in the world. That’s really the dream,” he says.