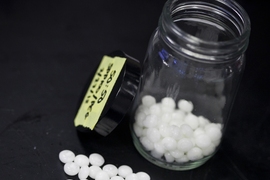 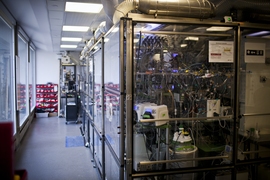 Caption:
Tablets produced by a prototype drug-manufacturing system built at MIT.
Credits:
Photo: Dominick Reuter
As the United States seeks to reinvigorate its job market and move past economic recession, MIT News examines manufacturing’s role in the country’s economic future through this series on work at the Institute around manufacturing.

Traditional drug manufacturing is a time-consuming process. Active pharmaceutical ingredients are synthesized in a chemical manufacturing plant and then shipped to another site, where they are converted into giant batches of pills. Including transport time between manufacturing plants, each batch can take weeks or months to produce.

Five years ago, MIT and pharmaceutical company Novartis launched a research effort to transform those procedures. Instead of manufacturing drugs using this conventional batch-based system, they envision a continuous manufacturing process, all done in one location, which would cut down on time and cost. 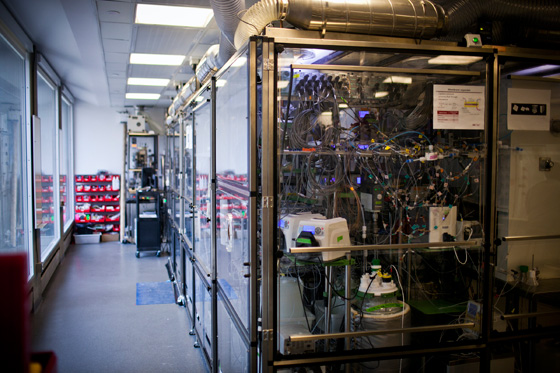 Such a system would allow greater flexibility in supply and could reduce the environmental impact of manufacturing. Continuous manufacturing could also improve quality-assurance testing, says Bernhardt Trout, director of the Novartis-MIT Center for Continuous Manufacturing.

“We see the future of pharmaceutical manufacturing as continuous,” says Trout, who is also a professor of chemical engineering at MIT. “That includes continuous flow together with a systems approach, integration and advanced control.”

Trout and other MIT researchers have now developed and demonstrated a prototype continuous-manufacturing system — the first that can transform raw materials into tablets in a nonstop process. The research team described the new prototype at last October’s annual meeting of the American Institute of Chemical Engineers.

The original grant supporting the MIT-Novartis Center for Continuous Manufacturing was $40 million over the first five years, with the possibility of renewal for another five years. Researchers at the center, which includes about a dozen MIT faculty members, have been working on different components of the prototype, including reactions between drug precursors, purification, crystallization, tablet formation and monitoring of the overall process.

To demonstrate the system, the researchers built a prototype that produces tablets of a specific drug manufactured by Novartis. However, the system is designed so that components can be swapped in and out to create different drugs.

Key to the continuous system is the development of chemical reactions that can take place as the reactants flow through tubes, as opposed to the huge vats in which most pharmaceutical reactions now take place. Traditional “batch processing” is limited by the difficulty of cooling large vats, but the flow system allows reactions that produce a great deal of heat to be run safely.

For drugs that require multiple steps, new ingredients can be added to the flow at specific points. Also integrated into the system are points where the drug solution is purified. Once the final active product is achieved, it is crystallized into a solid. Any necessary inert ingredients — such as preservatives or flavorings — are added, and the drug is then molded into the traditional tablet shape. 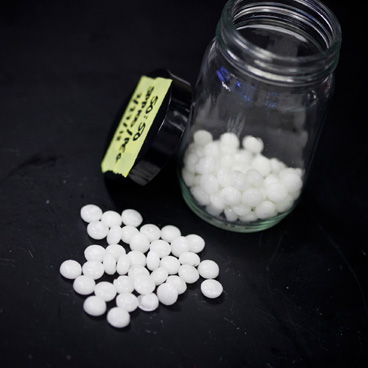 Several of those researchers — Jensen, Jamison and Myerson — are now also working on an even smaller, tabletop version of the technology, funded by DARPA.

With continuous-flow manufacturing, drug companies could manufacture drugs in small plants scattered around the globe, offering greater supply flexibility. Eliminating the need to transport drug components during the manufacturing process would also cut costs significantly: Estimates for the total cost savings of switching to continuous manufacturing range from 15 to 50 percent.

Another advantage is improved quality control, according to the center’s researchers. “Once you go to continuous, you begin to have continuous monitoring, so it’s much easier to control the quality,” says Jensen, the Warren K. Lewis Professor and head of the Department of Chemical Engineering, who developed much of the flow chemistry for the prototype system.

Continuous manufacturing also allows chemists to explore new ways to make drugs, by using reactions that would require too much heat or dangerous chemicals if performed in a huge vat. “We can use a lot of chemistry in continuous that we couldn’t use in batch,” Trout says.

Novartis recently renewed its grant to MIT for a second five-year term, during which the MIT research teams will work on new ways to form tablets, recycle catalysts and design more complex multistep syntheses, among other projects.

In the meantime, Novartis is setting up a pilot plant at its headquarters in Basel, Switzerland, to create a larger-scale version of the flow technology developed at MIT. It will likely take another four years to begin commercial rollout, and another five to 10 years to convert all of Novartis’ production facilities, says Tom Van Laar, head of global technical operations for Novartis. He expects that many other pharmaceutical companies will head in the same direction.

“It’s kind of like what happened with the first iPad. When it became successful, everybody else started making tablet computers,” Van Laar says. “I think the benefits are so huge, companies are almost going to have to try to do it.”