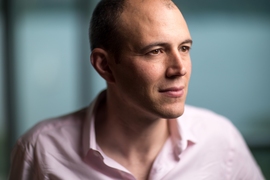 ↓ Download Image
Caption: “We try to understand how the rules [for firms] should be written in a way that provides members incentives to do research and work hard, and doesn’t yield disproportionate power to an individual,” says economist Alessandro Bonatti. 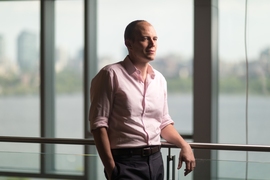 ↓ Download Image
Caption: “We try to understand how the rules [for firms] should be written in a way that provides members incentives to do research and work hard, and doesn’t yield disproportionate power to an individual,” says economist Alessandro Bonatti.

Caption:
“We try to understand how the rules [for firms] should be written in a way that provides members incentives to do research and work hard, and doesn’t yield disproportionate power to an individual,” says economist Alessandro Bonatti.

Suppose you help run the R&D unit of a major technology company. To encourage innovation, you might have the unit run a kind of internal race, letting a wide variety of projects unfold on their own. That seems like an enlightened approach, given the difficulty of knowing exactly which ones will pan out — and yet you might actually be discouraging the unit’s overall productivity, according to MIT Associate Professor Alessandro Bonatti.

Bonatti is an economist at the MIT Sloan School of Management whose work models the behavior of firms, employees, and market prices. Across this wide range of topics, Bonatti deploys game theory, the formal study of competition and cooperation, to draw some surprising conclusions.

Consider the R&D scenario. Individual researchers want to press ahead on their own projects, knowing they will benefit by making advances more quickly than their co-workers. But a useful final product for a firm — in computing, biotech, and many other fields — may well be a compromise among several individuals’ initiatives. How should a firm structure its R&D process so that researchers both compete and collaborate?

As Bonatti and co-author Heikki Rantakari PhD ’07, an assistant professor at the University of Rochester, suggest in a recent paper called “The Politics of Compromise,” firms can use rules to orchestrate R&D in these situations, making clear that only projects with certain degrees of compromise will be adopted. A balanced set of rules benefit firms, by helping them develop better products; the same rules give researchers incentives to both push ahead and compromise — since contributing to a successful product is better than having one’s own work be ignored.

“We try to understand how the rules should be written in a way that provides members incentives to do research and work hard, and doesn’t yield disproportionate power to an individual,” Bonatti explains.

So while popular culture fixates on lone innovators, the reality, Bonatti suggests, is usually different. “The goal of a compromise that builds on all core competencies is probably going to produce a better product.”

And while Bonatti’s work is largely theoretical — albeit with many references to real-world cases — he believes that streamlined analysis of a large organization is valuable.

For his work, including a wide-ranging portfolio of published research, Bonatti was granted tenure last year from MIT — a significant milestone for a scholar who did not gravitate toward his professional field until he reached college.

Bonatti, a native Italian, grew up near Naples and studied the classics extensively in school. But as an undergraduate at the University of Naples Federico II, his interest in studying economics took hold — partly because it helped him “understand more of the world,” and partly, Bonatti jokes, “because I didn’t want to be a lawyer, which is what everybody seemed to want to be.”

Yale University accepted Bonatti to its PhD program in economics, and he thrived as a graduate student there, completing in 2009 a thesis on dynamic pricing as deployed by the likes of Netflix. Bonatti’s graduate research led to what he calls a “wave” of published papers early in his career — four completed in 2011 alone, two years after he joined the MIT faculty.

At MIT, Bonatti has added to his portfolio by studying what he calls “the dynamics of incentives” for workers in firms; he still works on pricing as well. This has produced another wave of Bonatti papers, with several more being published in the last three years.

Bonatti’s careful modeling has established rigorous ways of thinking about numerous issues firms encounter. For instance, strict mechanisms that kill off questionable R&D projects, he has found, are important, in order to maintain high standards and save firms money in the long run. Additionally, voting procedures in firms that use a “supermajority” to approve projects can produce better collaboration, by satisfying more interests. Bonatti has also found that, in the R&D context, project deadlines are often more efficient than close supervision.

“I’m interested in different topics, but my method of analysis is always the same,” Bonatti says. “Look at the world, distill it into a framework that can be written out in tractable mathematical form, run the model, do a sanity check with reality — Do I think I’ve captured what matters? — and then, crucially, learn from the model.”

One advantage of this approach, Bonatti suggests, is that it can keep firms from incorrectly blaming their problems on particular individuals, and instead may help direct their focus to systemic issues that can help or hinder productivity.

“People’s motives are pretty clear in the R&D world, for instance in pharma,” Bonatti says. “They’re smart. They’re motivated. Their hearts are in the right place, considering they’re trying to cure diseases. It’s unlikely that any failure or productivity problem is a very person-specific issue.”

So systems matter. Still, every topic Bonatti studies is different, meaning that in his work, there is a huge premium on modeling firms and workers carefully, and considering as many aspects of a problem as possible.

In the last few years, Bonatti has also begun engaging with executives and R&D leaders more extensively, something that helps him develop what he calls “a proper conversation between the laboratory and the model.”

After all, the flexibility Bonatti finds useful in a firm’s researchers and managers, as they search for compromises and new solutions, applies to his work as well.

“There isn’t always just one solution to any one problem,” he says.

The price of regret