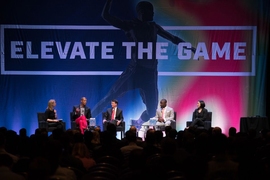 ↓ Download Image
Caption: The MIT Sloan Sports Analytics Conference — SSAC for short — drew over 3,500 attendees to the Hynes Convention Center in Boston, on March 3 and 4. 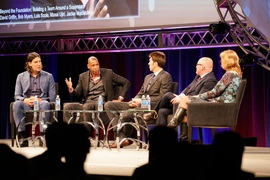 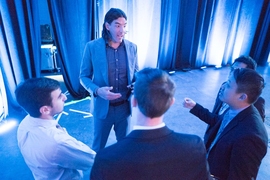 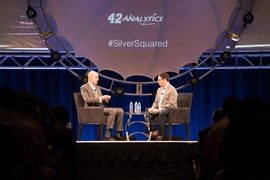 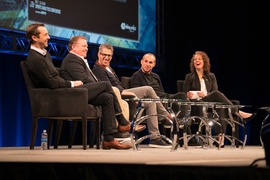 Caption:
Jessica Gelman (far right), CEO of the Kraft Analytics Group, is a co-chair of SSAC.

Ten days ago, Luis Scola was playing basketball in the NBA. Then he was waived at the end of February by the rebuilding Brooklyn Nets. So Scola spent last weekend doing something a little different: speaking on stage before thousands of people at the MIT Sloan Sports Analytics Conference.

The 6-foot-9 Scola, it turns out, is a sports analytics aficionado who has taken time during his 10-year NBA career to study nontraditional basketball metrics, such as Wins Shares — an estimation of the number of wins a player produces for his or her team — and imagined how he might generate better lineup-effectiveness data if he were the general manager of a franchise.

“You want to be ahead,” Scola said about adopting analytics in basketball, at a conference panel on Saturday. “You have to understand it.”

In Scola’s case, that meant modifying his own game once he recognized that three-pointers are a more efficient shot than long two-pointers — a statistical finding that has markedly changed how basketball is played.

But how exactly did statistical analysis become a major part of professional basketball over the last decade — to the point that every NBA team has an analytics unit?

“I’ll begin by giving credit to this conference encouraging a community to build around analytics,” said NBA Commissioner Adam Silver on Friday, during an on-stage interview with analyst and author Nate Silver. “There was a sense we were skewed way too far to the subjective side.”

Indeed the MIT Sloan conference — SSAC for short — has its roots in basketball. It was co-founded in 2007 by MIT graduate Daryl Morey SM ’00, the Houston Rockets’ general manager and one of the first people to bring analytics into the NBA front office. Initially a small event, this year’s conference, held March 3rd and 4th at the Hynes Convention Center in Boston, featured over 3,500 attendees, 39 panels, and scores of other presentations.

That includes Scola, an accomplished veteran who is looking for a contending team to sign with for the remainder of the season.

“I’m still a player,” he pointed out in a hallway chat with MIT News in between conference sessions on Saturday. Still, Scola acknowledged, working his way up the front-office ladder could be a logical next move for him.

“I have to do something when I’m done playing. I’m turning 37 soon, so that time will come soon, and I have to look at my options,” Scola said. “I think this could be something I’m interested in.”

So you’re portrayed by Brad Pitt?

To be sure, other ex-players have been bitten by the analytics bug. This year’s SSAC featured Billy Beane, former Major League Baseball outfielder and president of the Oakland A’s, making his first-ever appearance at the event. Beane’s use of analytics formed the basis of Michael Lewis’ 2003 book “Moneyball,” which, along with the ensuing movie starring Brad Pitt, popularized analytics more than any other development.

Analytics has changed quite a bit since 2003 in almost every sport, however. More teams use analytics; more analytics involve visual data rather than just the box-score statistics you might find in a newspaper; and more information is proprietary, closely held by teams, away from public view.

“I don’t really know if we’re Fred Flintstone or cutting-edge,” Beane quipped during a panel session on Friday.

Beane’s aggressive reliance on numbers rather than subjective scouting has apparently also evolved. Back when Lewis was writing about him, Beane recalled,  “We wanted to go scorched-earth and see what happened,” by applying numbers with an almost ideological fervor.

But numbers have their limits, too. For instance, analysts can be fooled into thinking statistics imply greater certainty than they really do. A few years after “Moneyball” came out, Beane hired Farhan Zaidi ’98, a former MIT undergraduate who is now general manager of the Los Angeles Dodgers and was a fellow panelist with Beane this year. Zaidi, Beane said, helped the A’s think more carefully about the limits of data and how to integrate subjective evaluations into their decision making.

“It’s ironic that a guy from MIT would be the guy who balances us out and gets us back to adding subjectivity,” Beane joked.

Still, the traditionalism of sports means that plenty of opportunities for innovation still exist when it comes to in-game tactics and franchise-building strategies. Morey’s Rockets, for instance, are having an excellent year and are likely to smash multiple records for for most three-pointers taken; they recently announced they were aiming to launch 50 per game. Most analytics, after all, indicate that NBA teams still have room to shoot even more three-pointers in the normal flow of a game.

In so doing, Morey said on a Friday panel, the Rockets are just taking a basic analytic insight “to its logical conclusion,” adding: “If that’s the right answer, then why don’t we do it?”

Concussion reduction, by the numbers

Still, events on the field or in the arena can always remind analysts to stay humble, suggested SSAC co-founder Jessica Gelman, CEO of the Kraft Analytics group.

“What’s been interesting this year is how unpredictable it is,” Gelman observed, referring to events such as the Cubs rallying from a 3-1 deficit to win their first World Series since 1908, and the Patriots rallying from 25 points down to win the Super Bowl last month.

But SSAC also showcased how broad sports analytics has become, spreading beyond evaluations of players or tactics to encompass a range of creative applications.

One paper presentation at this year’s conference, by a team from Rensselaer Polytechnic Institute, demonstrated a project that uses basketball statistics to get younger students interested in the STEM fields. The program allows young players to apply statistical tools that can help their own performances on the court. In turn, that may help the students see the usefulness of math and analytical thinking more generally.

“By making analytics applicable to basketball, the students will become more interested in STEM overall,” said John Drazan, a PhD candidate in biology at Rensselaer, during a presentation about the program.

And at the college level, the Ivy League recently used analytics to reduce the number of concussions in its football games. After conducting a recent three-year study, league officials found that 20.6 percent of players’ concussions occurred during kickoffs, although kickoffs comprised only 5.9 percent of all plays.

So the Ivy League took the unorthodox approach of having teams kick off from the 40-yard line, which leads to more touchbacks and fewer collision-generating runbacks. The result? Last season, there were no concussions during kickoffs in Ivy League play.

“It’s a sample size of one season, but we’re going to declare victory on having made that change,” said Carolyn Campbell-McGovern, deputy executive director of the Ivy League.

Patrick Rishe of Forbes writes about the 2017 MIT Sloan Sports Analytics Conference. Rishe notes that the conference’s “combination of knowledge, presentations, and networking opportunities is off-the-charts, and a must for programs who wish to be taken seriously in the Sports Business space.”