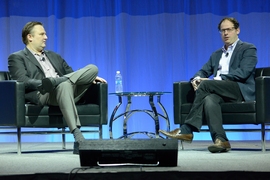 When Stephen Curry of the Golden State Warriors launches another salvo of mind-blowing three-point shots, as happens frequently these days, he isn’t just creating highlights for sports news shows. Curry is also playing the percentages.

Those theorists include Daryl Morey SM ’00, general manager of the Houston Rockets, the only team that shoots three-pointers more frequently than the Warriors. Outside shooting helped boost the Rockets to the NBA’s Western Conference finals last season, where they lost to the Warriors.

Morey is also the co-founder of the MIT Sloan Sports Analytics Conference (SSAC), the sports world’s signature showcase for empiricism. The 10th annual SSAC, held this year on March 11-12 at the Boston Convention and Exhibition Center, drew 3,900 attendees from 32 countries, most of whom love using numbers to question conventional sports wisdom.

“Good analysis is about asking questions and questioning assumptions,” said panelist Nate Silver, founder of the analytics site FiveThirtyEight, who was a baseball analyst before adding political forecasting to his job description.

One way to look at sports analytics is as a series of battles over the right way to understand sports. You might call these the games within the games, and they were fully on display at SSAC in 2016.

Sports analytics thrives in part because of the ethos that sports are best understood from the outside. Much of the groundbreaking work in sports analytics has come from avid fans not beholden to tradition.

The personification of this is baseball analyst Bill James, who in the 1980s gained a national following for his annual “Baseball Abstract” books. Michael Lewis’ 2003 bestseller “Moneyball,” about the way the Oakland Athletics applied Jamesian thinking, further popularized analytics.

This year, SSAC reunited Lewis, James, and former Athletics executive Paul DePodesta on one panel, where they reflected on the culture of baseball. After all, old-school baseball people have never resisted analytics quietly. Just a few days before SSAC, the famous ex-pitcher Goose Gossage lamented that baseball “is becoming a freaking joke because of the nerds who are running it.”

But James, who faced decades of resistance to his ideas, observed how anomalous such rants now seem.

“You used to have to pay attention to those guys,” said James. “Now you can just ignore them.”

That’s increasingly the scenario in most sports.

“Hey, that war’s over, and we won,” said Brian Burke, a football analyst for ESPN, speaking on the football analytics panel. SSAC embodies a major shift in the field: At this year’s event, 130 professional teams and leagues were represented. The outsiders have become insiders.

Alas, the 76ers have also compiled the league’s worst record over the last three seasons. Yet they have stuck to an analytics-friendly mantra: “Trust the process.”  You may not be able to control all your results, the idea goes, but you can always take the right approach.

But when a team performs this poorly, should you trust your analytical process or question it? That question was the subject of some colorful remarks at SSAC this year by Jeff Van Gundy, the high-profile former NBA coach and now announcer, who coached the Rockets for a few years under Morey and has used analytics on the job.

“It’s about the results,” Van Gundy said on the “Analytics in Action” panel.

That can sound like anathema to analytics people — but if a supposedly analytical approach is not working, Van Gundy insisted, then the results should be used to provide feedback about that process. The truly analytical mindset, he implied, is to keep questioning your ideas.

And when empirical answers about basketball are unclear, Van Gundy observed, “I would rather have people say, ‘I don’t know.’” After all, he added, sounding much like a complex systems analyst: “Cause and effect is so hard to determine.”

Bill James, among others, used to make his models freely available to readers. Contemporary analysts are less apt to do so, and baseball has since become littered with proprietary numbers like the controversial Wins Above Replacement (WAR). So debate continues in sports analytics about whether open access helps the state of knowledge, or whether secrecy is more beneficial.

This year at SSAC, one prominent analytics guru offered yet another viewpoint, when asked if data should be more freely open.

“I used to think that,” said Chris Anderson, co-author of “The Numbers Game,” while speaking on the soccer analytics panel. “I don’t think that any more. … There’s a lot of actionable insight to be gained from relatively simple data.”

Take Expected Goals, a now-popular metric that estimates how many goals a soccer team would normally score, given the quantity and quality of their shots. Such relatively simple shot-based metrics seem to have solid predictive value about team performance over the remainder of a given season. Bottom line: As desirable as loads of open data may be, there are still opportunities to do more with less.

Among the four finalists: an MIT-oriented entry, “Recognizing and Analyzing Ball Screen Defense in the NBA,” by John Guttag, a professor of computer science and electrical engineering at MIT; Joel Brooks, an MIT doctoral candidate; Jenna Wiens PhD ’14, a professor of computer science and engineering at the University of Michigan; and Avery McIntyre, a researcher at the University of Michigan. The paper presented an automated method for analyzing the ways basketball teams defend ball screens.

“It’s a little intimidating to be standing up there and see three NBA coaches in the front row,” said Guttag, referring to former coaches Tom Thibodeau, Scott Brooks, and Vinny Del Negro, who were in attendance for the presentation.

The overall first-prize winning paper, “The Thin Edge of the Wedge,” used rich data to predict shot patterns in the under-studied sport of tennis. “We’re just scratching the surface of what we can do,” Patrick Lucey, one of the co-authors, told MIT News.

The research paper competition also featured a popular vote by attendees on the best remaining paper. This year’s winner, Jeremy Hochstedler, is an MIT PhD candidate who, along with some of his cousins, spent months cataloging video of Indianapolis Colts quarterback Andrew Luck in order to develop a new method for judging whether Luck picks out open receivers well. (He does.) Hochstedler is pursuing a joint degree in the School of Engineering and the MIT Sloan School of Management.

Sports gambling attracts analytical-minded sports fans and is itself an area of research. Consider the current vogue for daily fantasy sports, now tied up in courtrooms where judges are assessing the question of whether such activities are games of skill or luck.

Annette Hosoi, an MIT professor of mechanical engineering, has been studying that question based on two years’ worth of data from daily fantasy sports companies. At an SSAC panel this year, ‘”Gambling: Skill or Luck,” she outlined some of her findings.

Think of betting games, Hosoi suggested, as being situated on a spectrum running from luck to skill. Betting on coin flips, she observed, would be close to pure luck. Many sports, she found, line up on different parts of that spectrum: moving from luck to skill, she told the audience, the research found that after coin flipping, next comes mutual fund investing; then poker; ice hockey and fantasy hockey; football; baseball; fantasy baseball and fantasy football; basketball and fantasy basketball; and cycling.

Basketball, and gambling on it, may be more skill-based partly because of the number of possessions in a game, Hosoi said, which enables a superior team to prove its worth: “If you get one lucky shot, that’s not [usually] going to change the outcome of the game,” Hosoi said.

This type of analysis was not on anyone’s radar a few years ago, before daily fantasy sports became a big business. But sports analytics and the SSAC keep producing surprises.

We may not know where sports analytics will be a decade from now, Morey said at SSAC’s opening session, but one thing seems safe: “I do know that what’s next is here.”