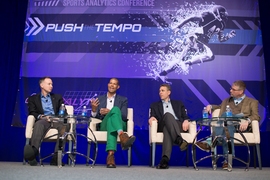 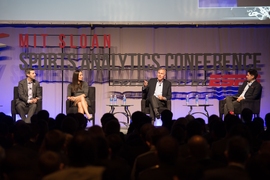 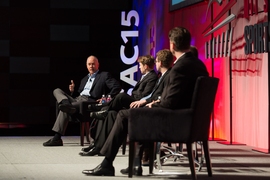 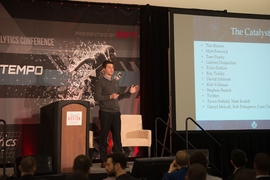 The ninth annual MIT Sloan Sports Analytics Conference (SSAC) was the biggest meeting yet of sports-data experts: More than 3,100 people attended the event last Friday and Saturday, including a notable number of 6-foot-8-inch former NBA forwards roaming around inside the Boston Convention and Exhibition Center. Founded by Houston Rockets general manager Daryl Morey SM ’00 and sports executive Jessica Gelman, SSAC illuminates the state of its high-profile industry. Here are some key takeaways from the 2015 event.

1. Sports analytics has made a big impact — sometimes

In 2006, Morey traded for Shane Battier, a forward averaging only 10 points per game. But advanced metrics showed Battier was an outstanding player due to his fine defense and shot selection. The Rockets soon started giving Battier an unprecedented level of statistical information about the opponents he had to guard.

“It was the first time someone was speaking my language in basketball,” Battier said at a Friday panel. “It wasn’t just [about] heart and grit.”

Battier, now retired, recalled this onstage with Morey; Jeff Van Gundy, his former Rockets coach; and author Michael Lewis, whose 2009 New York Times profile of Battier introduced several analytics concepts to the general public, such as the fact that the corner three-pointer is the most efficient shot in basketball.

By 2011, the secret was out: The Miami Heat signed Battier, and then other efficient players, such as Mike Miller and Ray Allen, to support stars LeBron James and Dwyane Wade; they promptly won two straight championships.

“The market for your services changed,” Lewis said to Battier: Sometimes, in sports, analytics has a large effect, quickly.

2. Still, most teams aren’t that analytical

Overall, however, it remains hard to get teams to accept data-driven ideas. NFL teams are still notoriously conservative on fourth-down plays, while football play-calling in general is too predictable.

“I think a Twister spinner could probably call a game better than some offensive coordinators,” said Brian Burke, founder of the web site Advanced Football Analytics, making the point that more randomization on offense would help.

Meanwhile, some basketball analytics, such as the statistic known as “win shares,” show the value of old-school virtues such as defense, rebounding, avoiding turnovers, and taking good shots. But many NBA teams still give huge contracts to players like Carmelo Anthony, a so-called “ball-stopper” because he does not pass enough.

“We are still stuck in [thinking] the best players are ball-stoppers … and it’s got to change,” former NBA coach Mike D’Antoni said on Friday.

3. Analysts need to explain themselves

To be useful, advanced analysis demands clear explanations for coaches, managers, and players. If analytics shows that a baseball team should alter its defensive positioning, or that long two-point shots in basketball are bad — and does it ever — this has to be explained in everyday language.

“It’s not what you know, it’s what you can impart on people,” Van Gundy said.

It does happen: Battier helped get James interested in analytics by giving him tips about guarding rival star Kevin Durant. James has since bought into shot-efficiency data, too.

“Once he had that little [bit], he wanted more,” Battier said. “If the greatest player of his generation is looking for an edge, I think other people would be wise to follow.”

4. Competition can hold analytics back

Guardiola, a noted experimenter, “asks me for things,” Niemeyer said, adding, “It’s always about numeric advantage. … If you know that the coach wants to see this information, then you look for that.”

Analytics was once open, academic-style: Bill James, whose annual “Baseball Abstract” books launched the field in the 1980s, has always published his formulas. But teams do not, which may hurt the field’s long-term progress.

Yet Niemeyer’s openness at SSAC reflects the culture of German soccer: The analytics staffs of top-level German teams have league-wide meetings where they share their best practices, then return to working independently.

“That is the right way to do it,” Niemeyer said.

5. Look under the hood

It’s not just teams who can be secretive: Today, many independent analysts do not show their work, either. And some metrics shoot to prominence without being fully vetted, like baseball’s WAR (“wins above replacement”), a much-hyped attempt to sum up a player’s total contributions. But recently critics, including Bill James, have questioned the lack of transparency in some versions of WAR, the high value it places on defense, and more. Even WAR proponents at SSAC this year agreed it’s a work in progress.

“It’s a flawed metric,” conceded Dave Cameron, managing editor of the popular baseball analytics site FanGraphs, noting that WAR is composed of heterogeneous evaluations of offense and defense. Still, Cameron defended the general value of WAR, while saying he welcomed outside input: “We’re trying to improve it.”

Meanwhile, basketball has several advanced metrics for judging a player’s total contributions. For one, win shares highly values Battier-style efficiency, while PER (“player efficiency rating”) is kinder to gunners like Anthony.

Understanding the assumptions behind any statistic “makes you think” about your own views, Van Gundy noted on Friday. That’s the essence of analytics: Don’t trust, but verify — with data.

Let’s assume you watch sports with a keen analytical eye: How can you get into the sports analytics business?

“If you’re doing good work, it will get noticed,” said Chris Anderson, co-author of “The Numbers Game,” a leading soccer analytics book. The classic path for a professional analyst involves being noticed as writer or blogger, then making the leap to an analytics-minded franchise.

“Find ways to make it actionable,” added Tyler Dellow, a former hockey blogger who is now a consultant for the NHL’s Edmonton Oilers. “Find ways to help coaches.”

“Do good work,” said Dallas Eakins, a former coach of the Oilers. “Have an opinion. And be able to back up your opinion.”

“Be yourself, and everything will be fine,” Dubas said.

Patrick Rishe writes for Forbes about the first day of the 2015 MIT Sloan Sports Analytics conference, highlighting six of the panel sessions he attended. “My fourth foray at the event, the biggest challenge continues to be finding enough time to attend all the sessions,” Rishe writes.

Hail to the geeks