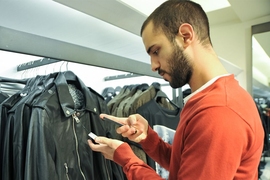 ↓ Download Image
Caption: An innovative study by an MIT economist found that in 10 major countries, companies sell their wares at the same prices in stores and online, at the same moments, nearly three-quarters of the time.

Caption:
An innovative study by an MIT economist found that in 10 major countries, companies sell their wares at the same prices in stores and online, at the same moments, nearly three-quarters of the time.

When you buy products online, do you imagine you could get better prices in a store? Conversely, does in-store shopping lead you to wonder whether you are missing better prices online?

An innovative study by an MIT economist shows that in 10 major countries, companies sell their wares at the same prices in stores and online, at the same moments, nearly three-quarters of the time.

“We were a bit surprised by the numbers,” says Alberto Cavallo, the Douglas Drane Professor in Information Technology and Management at the MIT Sloan School of Management and author of a newly published paper on the subject. In his view, the level prices have a lot to do with companies wanting to seem “fair” to as many consumers as possible.

“It has a lot to do with experience,” Cavallo adds. “I think what is driving much of this is consumers don’t think it’s fair when they see a different price online.”

Online shopping accounted for fewer than 10 percent of all retail transactions in the U.S. as of 2014, and researchers are still examining many of the shifting contours of online retail.

Cavallo’s study also contains other revealing data about the dynamics of online prices, including an explanation for some of the discrepancies in offline and online prices that exist among retail sectors.

Where in-store prices tend to diverge from online prices, it is often in business sectors with a premium on immediate convenience, including drug stores. If you need an item within an hour or two — some aspirin or band-aids, for instance — you are more likely to pay more in person.

On the other hand, retailers in electronics or apparel, whose products are often associated with less urgency, tended to have in-store and online prices that matched more closely.

The paper, “Are Offline and Online Prices Similar? Evidence from Large Multi-Channel Retailers,” appears in the January issue of the American Economic Review.

The cost of convenience

Cavallo’s paper grew out of MIT’s Billion Prices Project, an ongoing effort to track online prices, founded in 2008. To conduct the study, Cavallo recruited 323 workers to scan prices from stores in 10 countries, and compared these prices to the online data available for the same products, at the same time, from the same retailers.

In the U.S., products had the same prices about 69 percent of the time; that figure was as low as 42 percent in Brazil and as high as 91 percent in Britain.

Those numbers help bring clarity to a matter where subjective impressions can vary widely — although with good reason, perhaps.

“If you ask someone are the prices you get online the same as what you get in the store, they have different views, depending on where they shop or live,” Cavallo says.

Cavallo thinks the differences among sectors “make intuitive sense. In electronics and apparel, the online and offline markets are very integrated and people are used to doing some research online even if they’re going to buy offline.”

By contrast, he says, “Now you go to a drugstore. There we found that in-store prices are higher. It makes sense. When you go to CVS or Walgreens, you need the product immediately, and you are willing to pay for that convenience.”

Office supply stores had an even lower convergence of prices, which were identical just 25 percent of the time, although a ready explanation for that is not at hand. As Cavallo notes in the paper, office-supply prices “are sometimes higher and sometimes lower online, without any clear patterns.”

For his part, Cavallo recognizes that there is considerable room for more research about online prices and suggests it would be valuable to conduct this kind of study at different points in time, to see if there are shifting trends in this area.

As he also notes, the study shows that prices tend to flatten out across U.S. regions, probably due to the transparency of online prices. Whether that means prices tend to rise in unison or settle at lower levels is an important one to study in further detail, Cavallo observes, since it affects the cost of living and purchasing power from place to place.

“That has implications for economies and how it affects welfare,” Cavallo says. “Some people will win, some people will lose. … Hopefully we can continue doing this and see how things change over time.”

An MIT study finds that online and in-store goods are sold at the same price 70 percent of the time, reports Meghan Woolhouse of The Boston Globe. Prof. Alberto Cavallo believes online and in store prices are typically the same because shoppers would likely react badly “to price differences for the same goods from the same retailer.”