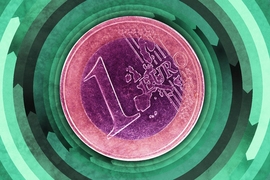 Economics has a “law of one price,” which states that identical goods should, in theory, sell for identical prices — or else markets will even out the differences. Empirical work on the topic, however, has produced little evidence in support of this “law,” and many studies showing deviations from it.

Now a newly published paper co-authored by two MIT economists, along with a colleague from the University of Chicago, presents evidence of a strong convergence of prices within the Eurozone, the region of European countries sharing a common currency. The divergence of product prices is 30 to 50 percent lower in Eurozone countries than it is even in neighboring countries whose currencies are pegged to the Euro.

“What is surprising about our paper is that we found the law of one price,” says Roberto Rigobon, the Society of Sloan Fellows Professor of Management at the MIT Sloan School of Management, and a co-author of the paper, “and we found it to be very strongly dependent on the currency in which the prices are quoted.”

Indeed, the unity of the currency seems to be a more powerful factor in determining prices than the characteristics of particular countries or consumers.

“Economists tend to think what drives international price differences are things like transportation costs, information costs, tariffs, cultural differences, and other factors,” says Alberto Cavallo, a professor at MIT Sloan, and another co-author of the paper. “We’re finding those things don’t seem to matter relative to the retailer showing prices in the same currency.”

The paper, “Currency Unions, Product Introductions, and the Real Exchange Rate,” is being published by the Quarterly Journal of Economics. Along with Cavallo and Rigobon, the study was conducted by Brent Neiman, a professor at the University of Chicago’s Booth School of Business.

From Apple to Zara

The study covers prices of thousands of products, drawing on data from four major international firms: Apple, H&M, Ikea, and Zara. Online pricing data was “scraped” using a harvesting technique that Rigobon and Cavallo first developed for the “Billion Prices Project,” which provides real-time inflation estimates. All told, the researchers examined nearly 120,000 products sold in 85 countries from October 2008 to May 2013.

The researchers checked online and in-store prices against each other, finding no significant divergences. Moreover, because the study dealt with international firms that often produce all their goods in a single location and then use similar logistical systems to distribute the goods, the variation in prices observed in non-Euro countries most likely does not come from variations in production and distribution.

“When we look at countries that do not use the same currency but are pegged, we still find an enormous amount of dispersion,” Cavallo says. “That points to the fact it’s not the flexibility or rigidity of the exchange rate that explains the differences.”

The research also uncovered nuances in pricing strategies. For one thing, international firms take country-specific taxes into account when setting prices, so that the pretax price in France, which has a relatively high Value-Added Tax (VAT), will be lower than in other countries. After taxes, however, the prices shown to consumers are uniform.

One explanation for the price convergence, the researchers suggest, is consumer psychology, shaped by access to prices online: People who can see prices from country to country across the Eurozone would consider it unfair if those prices diverged.

“That’s possibly driving this,” Cavallo says. “Or it could be that these firms just think about their pricing just in terms of currencies.”

The politics of pricing

Whatever the benefits or flaws of the Eurozone, the research indicates that the common currency is delivering on one of the stated aims of its backers: a more unified pricing system in Europe.

However, as the researchers point out, unified pricing is a double-edged sword: Relatively well-off consumers in some European countries may gain when prices equalize. But in a place such as Greece, currently suffering a severe recession with deep wage reductions, unified Eurozone pricing reduces consumers’ purchasing power.

The study has already attracted considerable attention among economists. Gita Gopinath, an economics professor at Harvard University, calls the work “a terrific paper” that adds new information to the field. “What we did not know, and what this paper shows, is that even when the volatility of the exchange rate is down to zero, it matters a lot if this zero volatility has to do with countries being in a currency union, versus if it is because of a fixed exchange rate,” Gopinath says. However, she adds, the precise mechanism at work remains unclear: “This striking finding is something we need to understand better.”

Cavallo, Rigobon, and Neiman take the same view in the paper. “Future work should focus on understanding what determines when prices behave like those documented here and when they do not,” they write. They would also like to collect more data illuminating how companies set prices when new goods are first introduced.

The researchers are already pursuing follow-up studies: For instance, with the entrance of Latvia to the Eurozone, they are now comparing how that change in currency has affected prices in Latvia.