The price of regret 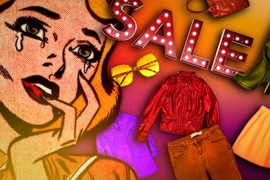 ↓ Download Image
Caption: A new study finds generally higher prices with occasional sales mixed in will yield more revenue than consistently low prices, at least for fashionable goods. “The high-value customers will still buy the product,” Karen Zheng says. “They want to [avoid] this feeling of regret, which would occur if they wait now and then cannot get it in the future.”

Caption:
A new study finds generally higher prices with occasional sales mixed in will yield more revenue than consistently low prices, at least for fashionable goods. “The high-value customers will still buy the product,” Karen Zheng says. “They want to [avoid] this feeling of regret, which would occur if they wait now and then cannot get it in the future.”
Credits:
Image: Jose-Luis Olivares/MIT

Let’s say you’ve just found a nice jacket in a store and are deciding whether to buy it. It’s a little pricey, so should you wait and hope it goes on sale in the future? Perhaps. Then again, the jacket might go out of stock before that happens, and you might never acquire it at all. Is it worth paying more now to avoid that feeling of regret?

For many people, evidently, it is. And as a paper co-authored by an MIT scholar suggests, not only do consumers tend to buy goods partly to avoid that feeling of regret, but some retailers fail to notice this behavioral quirk and thus miss an opportunity to increase their revenues.

Indeed, some retailers could have profits 7 to 10 percent higher if they pursued different pricing strategies, the study finds. That is, generally higher prices with occasional sales mixed in will yield more revenue than consistently low prices, at least for fashionable goods.

“The high-value customers will still buy the product,” says Karen Zheng, an assistant professor of operations management at the MIT Sloan School of Management. “They want to [avoid] this feeling of regret, which would occur if they wait now and then cannot get it in the future.” For such items, the research finds, if retailers fail to recognize consumers’ emotions, they could stock insufficient amounts of merchandise and may forgo up to 14 percent of consumer demand.

The paper, “Markdown or Everyday Low Price? The Role of Behavioral Motives,” appeared recently in print in the journal Management Science. The co-authors are Zheng and Özalp Özer, the Ashbel Smith Professor of Management at the University of Texas at Dallas.

In the paper, the scholars used existing empirical research from behavioral economics to build a new model of consumer decision making. They focused on two subjective factors that influence consumers: the feeling of regret that stems from either failing to cash in on a discount or missing out on a potential purchase, on the one hand, and the misperception of the products’ future availability, on the other. Consumers often believe products remain in stock for a shorter time than the goods actually do.

“Human beings are not good at dealing with uncertainty,” Zheng says.

To see how ignoring these factors while crafting retail strategies can yield suboptimal results for companies, consider two retailers that emphasize clothing: JCPenney and Macy’s. In 2012, as the scholars note in the paper, JCPenney switched to a strategy of everyday low prices in an effort to boost revenue. (It’s the same kind of strategy all-purpose retailers such as Costco and Sam’s Club use.) Macy’s, by contrast, tends to employ a strategy in which higher regular prices alternate with intermittent sales, at least for goods that are more expensive in the first place.

Which is a better approach? The JCPenney switch to consistently lower prices did not yield the revenue bump its management had anticipated. Indeed, the company fired the CEO who initiated this change within two years, and returned to using promoted sales.

The approach of using promoted sales works better for JCPenney because, as Zheng and Özer write in the paper, “branded fashion items tend to induce strong stockout regret but weak high-price regret.” If you buy that nice jacket, you will likely disregard how much you paid for it as time goes on, and be happy that you have it in the first place. The occasional discounts, meanwhile, attract more price-conscious customers. Switching to everyday low prices took away these factors.

The same thing does not hold for more mundane pieces of clothing, however, such as T-shirts. In such cases, consumers generally do not intensely regret missing out on certain T-shirts, because many suitable alternatives are available. Instead, consumers want to avoid paying too much for a T-shirt; here, the high-price regret is stronger, compared with the stockout regret.

What makes Macy’s pricing work, Zheng concludes, is that it uses different strategies for different categories of clothing: higher prices and occasional sales for the big-ticket clothes, mixed with everyday low prices for less-coveted items.

“It’s a smarter strategy to differentiate your pricing based on products,” Zheng says. “The behavioral factors are not independent of the products.”

For her part, Zheng is continuing to develop research related to consumer behavior and pricing strategies, while looking at the issue from slightly different angles. One of her ongoing studies, along with Georgia Perakis, the William F. Pounds Professor of Management at MIT Sloan, examines how much price markdowns affect the way consumers perceive the quality of products in the first place.

Overall, Zheng notes, it is hard for retailers to get pricing strategies right all the time, especially when they sell a diverse range of products. Thus, retailers should recognize which kinds of emotions and perceptions motivate consumers. In a world full of unknowns, consumers usually want to resolve their purchasing decisions fairly quickly. After all, who really want to be checking back to see if that nice jacket will be on sale, several weeks or months in the future?

A study co-authored by Prof. Karen Zheng examines how fear that items will go out of stock can motivate shoppers to pay full price, increasing stores’ profits, reports CNBC reporter Susie Poppick. “It turns out people tend to believe certain products will be sold faster or sooner than they actually are,” explains Zheng.