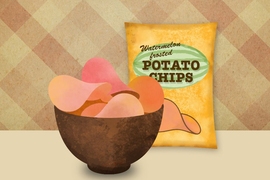 ↓ Download Image
Caption: “If you’re the kind of person who bought something that really didn’t resonate with the market, say, coffee-flavored Coca-Cola, then that also means you’re more likely to buy a type of toothpaste or laundry detergent that fails to resonate with the market,” MIT professor Catherine Tucker says.
Credits: Illustration: Christine Daniloff/MIT

Caption:
“If you’re the kind of person who bought something that really didn’t resonate with the market, say, coffee-flavored Coca-Cola, then that also means you’re more likely to buy a type of toothpaste or laundry detergent that fails to resonate with the market,” MIT professor Catherine Tucker says.
Credits:
Illustration: Christine Daniloff/MIT

Diet Crystal Pepsi. Frito Lay Lemonade. Watermelon-flavored Oreos. Through the years, the shelves of stores have been filled with products that turned out to be flops, failures, duds, and losers.

But only briefly filled with them, of course, because products like these tend to get yanked from stores quickly, leaving most consumers to wonder: Who exactly buys these things, anyway?

Now a published study co-authored by two MIT professors answers that question. Amazingly, the same group of consumers has an outsized tendency to purchase all kinds of failed products, time after time, flop after flop, Diet Crystal Pepsi after Diet Crystal Pepsi. The study calls the people in this group “harbingers of failure” and suggests they provide a new window into consumer behavior.

“These harbingers of failure have the unusual property that they keep on buying products that are taken from the shelves,” says MIT marketing professor Catherine Tucker, co-author of a paper detailing the study’s results.

Significantly, Tucker adds, these star-crossed consumers can sniff out flop-worthy products of all kinds.

And while strong initial sales of products normally seem like a good thing, the research reveals that is not always the case — not if it’s the harbingers of failure who are rushing out to purchase those products.

“Usually when you’re doing market research, the common wisdom is that people liking your product is a good thing,” Tucker adds. “But what we’ve done in this research is identify a group of people who you really want to [have] hate your product. And that changes the paradigm of market research.”

What were they thinking?

All told, the researchers ended up examining 77,744 customers who purchased 8,809 new products between 2003 and 2005, and then tracking the aggregate data longer to see how well those products fared. They defined a failed product as one pulled from stores less than three years after its introduction; only about 40 percent of the new products survived that long.

In a key part of the study, the researchers studied consumers whose purchases flop at least 50 percent of the time, and saw pronounced effects when these harbingers of failure buy products. When the percentage of total sales of a product accounted for by these consumers increases from 25 to 50 percent, the probability of success for that product decreases by 31 percent. And when the harbingers buy a product at least three times, it’s really bad news: The probability of success for that product drops 56 percent.

But what explains the consumer behavior of the harbingers of failure?

The researchers also examined and ruled out other possible explanations of the phenomenon. For instance: The harbingers are not evidently any more tired or distracted than anyone else when choosing products.

“It’s not the case that these people are buying goods at 2 in the morning, or something like that,” Tucker says. “They’re not inattentive. Systematically, they are able to identify these really terrible products that fail to resonate with the mainstream.”

A result that “may end up changing management practice”

Other scholars in the field say the study has fresh insights and is methodologically solid. Christophe Van den Bulte, a professor at The Wharton School of the University of Pennsylvania, who was involved in the review process for the paper, says it “documents a new phenomenon” and as such “may end up changing actual management practice.” He also notes that the finding is “robust to several variations in how the data are analyzed.”

Van den Bulte adds that the study opens up a series of future research issues, including how much the phenomenon applies to other product categories and how to further explain what guides the actions of these hapless consumers.

For their part, the researchers are continuing to pursue related research and are interested in looking at how widely the “harbingers of failure” pattern holds in a variety of areas, from everyday shopping to financial markets.

“We’re certainly thinking about whether this is a much more general result than people simply buying new products,” says Simester — who, when pressed about dubious products he himself has bought, admits to having once purchased a supposedly self-cleaning cat litter box that failed to function.

And Tucker, for her part, admits that yes, she used to drink Crystal Pepsi.

“This paper may be slightly autobiographical,” Tucker acknowledges.

Forbes reporter Abdo Riani spotlights an MIT and Northwestern study that uncovered why startup founders should be more cautious when listening to customer feedback. In a “study of six years’ worth of transactional data of 130 thousand customers in large retail chains…[researchers] made an interesting discovery – about 25% of customers consistently buy products that end up failing within 3 years,” writes Riani.

New York Times contributor Alex Stone highlights research by Profs. Catherine Tucker and Duncan Simester analyzing the retail, real estate and political habits of consumers dubbed “harbingers of failure.” Tucker explains that, “I think what we’re picking up on is that there are just some people who, for whatever reason, have consistently nonmajority tastes.”

Wall Street Journal reporter Brenda Cronin writes that MIT researchers have identified a group of consumers that routinely buy products that fail. “You’ve got to think about who’s buying” the product, explains Prof. Duncan Simester. “If it’s these harbingers buying them….and if they keep buying them…then you’ve got a problem.”

MIT researchers have found that certain consumers are more prone to buying products that end up failing, reports Peter Coy for Bloomberg Business. “It's not just that certain people try out new products that turn out to be unsuccessful,” writes Coy. “It's that they keep going back for more of them.”

CNBC’s John Schoen writes that MIT researchers have identified a group of consumers that repeatedly buy unpopular products. "You might have thought this was a category-specific effect — someone who buys the wrong makeup," explains Prof. Catherine Tucker. "But the strongest effects were going across category.”