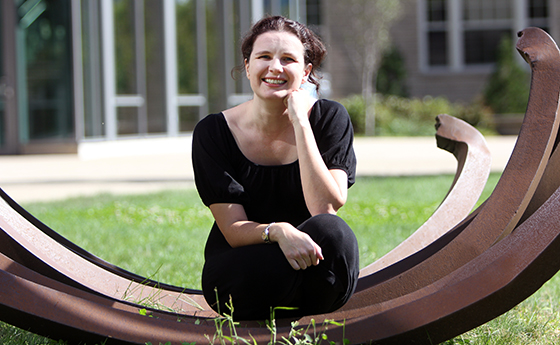 About five years ago, Catherine Tucker was pregnant with identical twins when she encountered a serious medical issue. Her unborn children were diagnosed with twin-to-twin transfusion syndrome, a dangerous condition in which one twin acquires too much blood and the other loses too much. Before the advent of new medical technologies within the last 30 years, the survival rate of twins with the syndrome was less than 10 percent.

Tucker flew to Florida for specialized surgery, but found trouble getting her medical records sent there. “There was absolutely no way to get my records out of Boston in any form that was not paper,” Tucker says. Her doctors in Florida had to repeat all of her tests, she recounts, because they lacked timely access to the data.

In Tucker’s case, the surgery was successful, and she now has healthy four-year-old girls, Elizabeth and Cordelia. “You can see there’s a happy ending,” Tucker says, gesturing at a picture of her twins in her office.

But the issue of digital medical records stayed with Tucker, the Mark Hyman Jr. Career Development Associate Professor of Marketing at the MIT Sloan School of Management, when she returned to work. “It inspired me to study, for one of my articles, how babies survive in the womb as the result of this medical technology,” she says.

That paper, “Can Healthcare IT Save Babies?” published in the Journal of Political Economy in 2011, showed that the digitization of health records can indeed save the lives of newborns. By surveying 2,500 U.S. counties over 12 years, Tucker and her co-author, Amalia Miller of the University of Virginia, estimated that a 10 percent increase in use of electronic medical records would, by disseminating information among caregivers more rapidly, reduce infant mortality by 16 deaths per 100,000 live births.

That study built on previous research published in the journal Management Science in 2009 showing that certain privacy regulations, in U.S. states that had adopted them, had reduced the use of electronic medical records by 24 percent. This was due in part to “network effects,” the way in which the adoption and usefulness of a technology depends on the number of people already using it.

Examining the trade-offs inherent in privacy policies might not seem like the kind of study a marketing professor would normally pursue. But Tucker, who recently received tenure at MIT Sloan, has established a niche in her profession as an expert on the adoption of technology, and the ways those technological changes relate to marketing and privacy issues.

“The digital world has transformed how we do marketing,” Tucker says. As a result, she notes, marketing “is increasingly data-driven, and increasingly contentious.”

‘Consumers need to feel they remain in control’


While completing her PhD, however, Tucker came to realize how much network effects related to the emerging world of online advertising and marketing: “If you have privacy regulations, it’s going to make it a lot more difficult to exchange information over a network.” In many ways, she realized, “the privacy regulations are a lot more interesting than measuring the network effects.”

That is particularly true, Tucker thinks, given the way technology has changed online marketing in the last several years. “It was all about improving the visual until about 2005, and since then it’s been all about improving the data,” Tucker says. In 2005 — the year she completed her doctorate — the typical cutting-edge Internet ad involved “rich media,” and featured images such as a car moving across a computer screen.

“Since then,” Tucker observes, “we’ve added video advertising, viral video and an evolution in terms of social ads. Facebook is the biggest purveyor of online advertising, but in 2005, we didn’t know what Facebook was.” In 2012, she notes, “as a company you now have the ability to make advertising incredibly data-rich, show precisely what you want to show, decide who to show it to … put the shoes [the consumer] just browsed [online] a few weeks ago into the ad, talk about their friends in the ad.”

That raises another question for marketers: How much personalization is too much? Some of Tucker’s most intriguing research examines how companies’ ads can backfire for privacy reasons. In one research study she co-authored, published in Marketing Science in 2011, Tucker found that online ads are effective if they either correlate with a web site’s subject matter, or if they are “obtrusive.” In combination, however, those factors become counterproductive: A targeted and obtrusive ad suddenly presents a privacy concern for consumers, particularly those who refuse to disclose their incomes in online surveys.

“Customers need to feel they remain in control,” Tucker says, adding: “An information-rich, potentially intrusive ad at the wrong time is worse than doing nothing.”

As Tucker sees it, the broad range of her empirical work is meant to enhance the ongoing policy conversation about privacy and technology: Solid empirical studies about the topic can help inform reasoned regulatory decisions.

“I get to do some of the work to influence and form public policy that you always dream of as a PhD in economics, but I get to do it on the forefront of technology,” she says.

To that end, some of Tucker’s ongoing research now involves genetic privacy concerns: With more and more people having their genomes sequenced, by both medical researchers and commercial firms, she wants to study privacy-versus-utility issues as they relate to our DNA. While it may be another venture into a subject not typically studied by marketing academics, it won’t be her first foray into the world of medical technology.

Indeed, when she was pregnant and dealing with her twins’ illness, Tucker could not have foreseen that those stressful moments would have provided impetus for some of her work. For now, she says, simply, “I’m very proud of making tenure and having twins at the same time.”