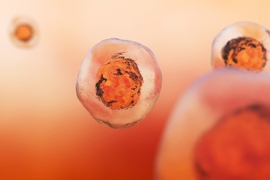 ↓ Download Image
Caption: MIT earth scientists have found evidence that eukaryotes — the domain of life comprising animals, plants, and protists — were present on Earth as early as 2.33 billion years ago, right around the time when oxygen became a permanent fixture in the atmosphere.

Caption:
MIT earth scientists have found evidence that eukaryotes — the domain of life comprising animals, plants, and protists — were present on Earth as early as 2.33 billion years ago, right around the time when oxygen became a permanent fixture in the atmosphere.

The findings, reported by MIT earth scientists today in Nature, suggest that eukaryotes — the domain of life comprising animals, plants, and protists — were present on Earth as early as 2.33 billion years ago, right around the time when oxygen became a permanent fixture in the atmosphere.

This new time-stamp for ancient life significantly predates the earliest sign of eukaryotes found in the fossil record —1.56 billion-year-old macroscopic fossils that scientists widely agree are the remains of multicellular algae-like organisms.

The MIT researchers arrived at their estimate not by examining rocks for fossil evidence but by using a technique called “molecular clock analysis.” This approach involves first sifting through DNA databases to trace the evolution of particular gene sequences across hundreds of modern species. Then, using ages derived from the fossil animal and plant relatives, these sequences can be tied backward in time to the earliest point at which those sequences must have been expressed in ancestral eukaryotes.

“We’ve again demonstrated the feasibility of using modern DNA to provide insights about early life,” says Roger Summons, professor of geobiology in MIT’s Department of Earth, Atmospheric and Planetary Sciences (EAPS). “We have no concrete records of early life. We have a few fossil microbes, which are often disputed, and some geochemical signals, but it’s not enough to reconstruct an informed history of life. What we’re saying is, you can look at what’s on the planet today, and you can tell something important about what the organisms’ ancient ancestors were doing.”

The analysis was carried out by Summons and lead author David Gold, a former MIT postdoc who is currently at Caltech, along with Abigail Caron, a senior research support associate at MIT, and Gregory Fournier, the Cecil and Ida Green Career Development Assistant Professor in EAPS.

The team focused its genetic search on DNA sequences that code for the biosynthesis of sterol, a class of molecules found in all eukaryotes that influences the characteristics and behavior of their cell membranes.

“[Sterol] determines how a membrane changes shape and mediates behavior — for example, the ability to engulf a piece of food,” Summons says. “A single-celled eukaryote can engulf and digest its food, whereas most bacteria have to excrete enzymes to break something down before taking it in.”

The group looked to trace the genetic evolution of the first two enzymes involved in sterol production: SQMO, or squalene monooxygenase, which inserts an atom of oxygen into squalene; and OSC, or oxidosqualene cyclase, which folds the oxidosqualene molecule up to form the classic four-ring configuration of a sterol, the best known example of which is cholesterol.

The two enzymes represent the beginning steps in the biosynthesis of sterol, which over time has evolved to include many more enzymes that improve sterol function and effectivness. The researchers reasoned that if they could trace back the evolution of the enzymes in the first steps of sterol biosynthesis , they could then infer when some of the earliest eukaryotes were present on Earth.

The team looked for SQMO and OSC in the National Center for Biotechnology Information protein database, a vast compendium of genetic sequences for thousands of modern species, contributed by scientists all over the world. The researchers wrote algorithms to efficiently cull through the genetic data, looking for those species that expressed the DNA sequences coding for SQMO and OSC.

Then, for each enzyme they drew up a phylogentic tree — a branching diagram showing the evolutionary relationship among those species expressing either SQMO or OSC.

“When you plot the trees for both enzymes, you find they’re eerily similar,” Summons says. “To me, this was an astonishing fact: These histories of these two enzymes across the eukaryote tree, and also including some bacteria, look pretty close to identical. The genes always move together. It’s very rare to find one without the other right next to it.”

In particular, the researchers noted two early points along both evolutionary trees, where it appeared that each enzyme was genetically transferred between eukaryotes and  bacteria. These genetic jumps, known as horizontal gene transfers, mark the times when organisms shared these genes.

To identify these points, the researchers performed a “molecular clock analysis,” a technique which measures time according to random changes in DNA, as these mutations occur at relatively constant rates. Summons and his colleagues used other algorithms based on the “topology,” or rate of genetic mutation, in each evolutionary tree.

They calibrated the algorithm with data from known fossil records, including confirmed ages of certain species within each tree, including ancient corals, starfish, and algae. They then ran the algorithm — their molecular clock — backward in time to determine when the genes for sterol were transferred between bacteria and eukaryotes. Running the clock in subtly different ways, along with error propagations, gave dates that converged around one point, 2.3 billion years ago.

“The age of eukaryotes has been argued for decades, and there are widely differing opinions,” Summons says. “We’re putting out this piece of evidence that we think is significant, that says we believe that sterol was being made at least 2.3 billion years ago, and that the earliest eukaryotes were here at least that long.”

In 2016, Summons’ group determined that another life-shifting event took place around 2.3 billion years ago: Oxygen became a permanent fixture in the Earth’s atmosphere, in what is now regarded as the Great Oxidation Event. Summons says the possibility that eukaryotes may have existed around the same time makes sense, as they would have required ample amounts of oxygen to synthesize sterols in order to maintain their cell membranes.

Going forward, the team plans to trace the evolutionary history of enzymes further down in the sterol pathway — particularly those involved in synthesizing cholesterol — again by using modern genetic sequences to, as Summons puts it, “unravel its evolutionary story.”

“People have known for many years that they can work out ancestries from DNA, including the ancestry of humanity,” Summons says. “We know a lot about the connections between Neanderthals, Denisovans, and other early groups of humans from pieces of DNA in bone. But that’s projecting back a couple million years. We’re projecting back 2.3 billion years. So we’re showing modern DNA can be used to understand key events in the history of life, billions of years ago.”

This research was supported, in part, by the Simons Foundation, the Agouron Institute, and the National Science Foundation.