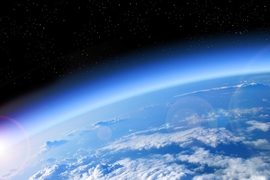 ↓ Download Image
Caption: MIT scientists say that the Great Oxygenation Event (GOE), a period that scientists believe marked the beginning of oxygen’s permanent presence in the atmosphere, started as early as 2.33 billion years ago. 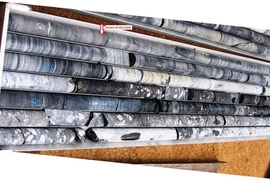 ↓ Download Image
Caption: To get a more precise timing for the GOE, Genming Luo first analyzed rocks from around this period. Luo was looking for a particular sulfur isotope pattern called mass-independent fraction of sulfur isotopes (S-MIF) in order to determine when oxygen first appeared in the Earth’s atmosphere.
Credits: Courtesy of the researchers

Caption:
MIT scientists say that the Great Oxygenation Event (GOE), a period that scientists believe marked the beginning of oxygen’s permanent presence in the atmosphere, started as early as 2.33 billion years ago.

Caption:
To get a more precise timing for the GOE, Genming Luo first analyzed rocks from around this period. Luo was looking for a particular sulfur isotope pattern called mass-independent fraction of sulfur isotopes (S-MIF) in order to determine when oxygen first appeared in the Earth’s atmosphere.

Today, 21 percent of the air we breathe is made up of molecular oxygen. But this gas was not always in such ample, life-sustaining supply, and in fact was largely absent from the atmosphere for the first 2 billion years of Earth’s history. When, then, did oxygen first accumulate in the atmosphere?

MIT scientists now have an answer. In a paper appearing today in Science Advances, the team reports that the Earth’s atmosphere experienced the first significant, irreversible influx of oxygen as early as 2.33 billion years ago. This period marks the start of the Great Oxygenation Event, which was followed by further increases later in Earth’s history.

The scientists have also determined that this initial rise in atmospheric oxygen, although small, took place within just 1 to 10 million years and set off a cascade of events that would ultimately lead to the advent of multicellular life.

“It’s the start of a very long interval that culminated in complex life,” says Roger Summons, senior author of the paper and professor in the Department of Earth, Atmospheric, and Planetary Sciences (EAPS) at MIT. “It took another roughly 1.7 billion years for animals similar to those we have today to evolve. But the presence of molecular oxygen in the ocean and the atmosphere means that organisms that respire oxygen could thrive.”

Summons’ MIT co-authors include lead author and postdoc Genming Luo, as well as EAPS Associate Professor Shuhei Ono and graduate student David Wang. Professors Nicolas Beukes from the University of Johannesburg, in South Africa, and Shucheng Xie from the China University of Geosciences are the other co-authors.

Whiffs in the air

For the most part, scientists agree that oxygen, though lacking in the atmosphere, was likely brewing in the oceans as a byproduct of cyanobacterial photosynthesis as early as 3 billion years ago. However, as Summons puts it, oxygen in the ancient ocean “would have instantly been sucked up” by hungry microbes, ferrous iron, and other sinks, keeping it from escaping into the atmosphere.

“There may have been earlier, and temporary, ‘whiffs’ of oxygen in the atmosphere, but their abundances and durations are not currently measurable,” Summons says.

That changed with the Great Oxygenation Event (GOE), a period that scientists believe marked the beginning of oxygen’s permanent presence in the atmosphere. Previous estimates have placed the start of the GOE at around 2.3 billion years ago, though with uncertainties of tens to hundreds of millions of years.

“The dating of this event has been rather imprecise until now,” Summons says.

To get a more precise timing for the GOE, Luo first analyzed rocks from around this period, looking for a particular sulfur isotope pattern. When volcanoes erupt, they emit sulfur gases, which, when exposed to the sun’s ultraviolet radiation, can fractionate chemically and isotopically. The pattern of isotopes generated in this process depends on whether or not oxygen was present above a certain threshold.

Luo looked to pinpoint a major transition in a particular sulfur isotope pattern called mass-independent fraction of sulfur isotopes (S-MIF), in order to determine when oxygen first appeared in the Earth’s atmosphere. To do this, he first looked through sediment cores collected by Ono on a previous expedition to South Africa.

“Genming is a very tenacious and thorough guy,” Summons says. “He found rocks from deep in the core had S-MIF, and rocks shallow in the core had no S-MIF, but he didn’t have anything in between. So he went back to South Africa.”

There, he was able to sample from the rest of the sediment core and two others nearby, and determined that the S-MIF transition — marking the permanent passing of the oxygen threshold — occurred 2.33 billion years ago, plus or minus 7 million years, a much smaller uncertainty compared with previous estimates.

Getting a “decent hold”

The team also discovered a large fractionation of the isotope sulfur-34, indicating a spike in marine sulfate levels around this same time. Such sulfate would have been produced from the reaction between atmospheric oxygen with sulfide minerals in rocks on land, and sulfur dioxide from volcanoes. This sulfate was then used by ocean-dwelling, sulfate-respiring bacteria to generate a particular pattern of sulfur-34 in subsequent sediment layers that were dated between 1 and 10 million years after the S-MIF transition.

The results suggest that the initial buildup of oxygen in the atmosphere was relatively rapid. Since its first appearance 2.33 billion years ago, oxygen accumulated in high enough concentrations to have a weathering effect on rocks just 10 million years later. This weathering process, however, would have leached more sulfate and certain metals into waterways and ultimately, the oceans. Summons points out that it would be quite some time before the Earth system would reach another stable state, by the burial of organic carbon, and exceed the higher oxygen thresholds needed to encourage further biological evolution.

“Complex life couldn’t really get a decent hold on the planet until oxygen was prevalent in the deep ocean,” Summons says. “And that took a long, long time. But this is the first step in a cascade of processes.”

Timothy Lyons, professor of biogeochemistry at the University of California, Riverside, says the group’s timeline for oxygen’s rise “is a major contribution toward a refined understanding of the co-evolution of Earth’s early life and environments.”

“There are hints from past research of early transient accumulation of oxygen in the atmosphere and surface oceans before the loss of S-MIF, but the irreversible loss of this signal from the geologic record is now taken as the smoking gun for what we call the Great Oxidation Event—when appreciable levels of oxygen became a permanent feature in our atmosphere,” says Lyons, who did not contribute to the research. “The authors have done the community a great service by refining the timing of this event.”

Now that the team has constrained the timing of the GOE, Summons hopes others will apply the new dates to determine a cause, or mechanism, for the event. One hypothesis that the team hopes to explore is the connection between oxygen’s sudden and rapid appearance, and Snowball Earth, the period in which Earth’s continents and oceans were largely ice-covered. Now, thanks to the improved precision in geochronology, which Summons largely credits to EAPS Professor Samuel Bowring, scientists can start to nail down the mechanisms behind major events in Earth’s history, with more precise dates.

“It’s Sam’s insistence about this whole issue about ‘no dates, no rates’ that I think encourages people to focus on getting better data on the timing and duration of geological events,” Summons says.

“Because the other big question is, why do we have 21 percent oxygen in the Earth’s atmosphere that’s stable? That’s remarkable. And we need to understand that.”