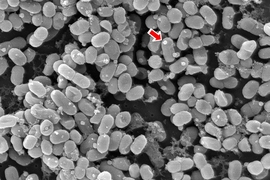 ↓ Download Image
Caption: Scientists in Sallie (Penny) Chisholm's lab at MIT documented the first extracellular vesicles produced by ocean microbes. The arrow in the photo above points to one of these spherical vesicles in this scanning electron micrograph showing Prochlorococcus cyanobacteria.
Credits: Image: Steven Biller/Chisholm Lab

Caption:
Scientists in Sallie (Penny) Chisholm's lab at MIT documented the first extracellular vesicles produced by ocean microbes. The arrow in the photo above points to one of these spherical vesicles in this scanning electron micrograph showing Prochlorococcus cyanobacteria.
Credits:
Image: Steven Biller/Chisholm Lab

Marine cyanobacteria — tiny ocean plants that produce oxygen and make organic carbon using sunlight and CO2 — are primary engines of Earth’s biogeochemical and nutrient cycles. They nourish other organisms through the provision of oxygen and with their own body mass, which forms the base of the ocean food chain.

Now scientists at MIT have discovered another dimension of the outsized role played by these tiny cells: The cyanobacteria continually produce and release vesicles, spherical packages containing carbon and other nutrients that can serve as food parcels for marine organisms. The vesicles also contain DNA, likely providing a means of gene transfer within and among communities of similar bacteria, and they may even act as decoys for deflecting viruses.

In a paper published this week in Science, postdoc Steven Biller, Professor Sallie (Penny) Chisholm, and co-authors report the discovery of large numbers of extracellular vesicles associated with the two most abundant types of cyanobacteria, Prochlorococcus and Synechoccocus. The scientists found the vesicles (each about 100 nanometers in diameter) suspended in cultures of the cyanobacteria as well as in seawater samples taken from both the nutrient-rich coastal waters of New England and the nutrient-sparse waters of the Sargasso Sea.

Although extracellular vesicles were discovered in 1967 and have been studied in human-related bacteria, this is the first evidence of their existence in the ocean.

“The finding that vesicles are so abundant in the oceans really expands the context in which we need to understand these structures,” says Biller, first author on the Science paper. “Vesicles are a previously unrecognized and unexplored component of the dissolved organic carbon in marine ecosystems, and they could prove to be an important vehicle for genetic and biogeochemical exchange in the oceans.”

Billions and billions of vesicles

Biller’s metagenomic analysis of the vesicles taken from the seawater revealed DNA from a diverse array of bacteria, suggesting that vesicle production is common to many marine microbes. The researchers estimate the global production of vesicles by Prochlorococcus alone at a billion billion billion per day — representing a notable addition of carbon to the scarce nutrient pool of the open seas.

Lab experiments showed that the vesicles are stable, lasting two weeks or more, and that the organic carbon they contain provides enough nutrients to support the growth of nonphotosynthetic bacteria.

Given the dearth of nutrients in the open ocean, the daily release by an organism of a packet one-sixth the size of its own body is puzzling, Chisholm says. Prochlorococcus has lost the ability to neutralize certain chemicals and depends on nonphotosynthetic bacteria to break down chemicals that would otherwise act as toxins. It’s possible the vesicle “snack packets” help make this relationship mutually beneficial.

“Prochlorococcus is the smallest genome that can make organic carbon from sunlight and carbon dioxide and it’s packaging this carbon and releasing it into the seawater around it,” says Chisholm, the Lee and Geraldine Martin Professor of Environmental Studies in MIT’s Department of Civil and Environmental Engineering and Department of Biology, who is lead investigator of the study. “There must be an evolutionary advantage to doing this. Our challenge is to figure out what it is.”

Because the vesicles also contain DNA and RNA, the researchers surmise they could play a role in horizontal gene transfer, a means for developing genetic diversity and sharing ecologically useful genes among the Prochlorococcus metapopulation.

But perhaps the most unusual potential role of the vesicles is as a decoy for predators: Electron microscopy shows phages (viruses that attack bacteria) attached to vesicles. When a phage injects its DNA into the vesicle (making it impossible for the phage to reproduce in a living cell), it renders the phage inactive, according to Biller, who says the vesicles could be acting like chaff released by a fighter jet to divert missile attacks. A phage attached to a vesicle is effectively taken out of the battle, providing a creative means of deterrence.

“Marine cyanobacteria of the genera Prochlorococcus and Synechoccocus are the two most abundant phototrophs,” says biologist David Scanlan, a professor at the University of Warwick who was not involved in this research. “By releasing extracellular vesicles these organisms shed new light on the importance of such particles in the largest ecosystem on Earth — the open ocean — with implications for marine carbon cycling, mechanisms of horizontal gene transfer, and as a defense against phage attack.”

The vesicles first came to Chisholm’s attention in 2008 when Anne Thompson, then a graduate student, noticed little “blebs” on the surface of Prochlorococcus cells while using electron microscopy. Neither she nor Chisholm nor other ocean biologists who saw the photo were able to identify the spheres. But Biller, who joined Chisholm’s lab in 2010 after completing his graduate studies on soil bacteria, recognized them as vesicles, and began the study resulting in the Science paper.

In addition to Biller, Chisholm, and Thompson, other co-authors on the paper are Florence Schubotz and Roger Summons, of MIT’s Department of Earth, Atmospheric and Planetary Sciences, and Sara Roggensack, a former MIT lab technician who is now a graduate student at Tufts University.

The work was supported by grants from the Gordon and Betty Moore Foundation; the National Science Foundation’s Center for Microbial Oceanography: Research and Education and its Biological Oceanography Program; and the MIT Energy Initiative.