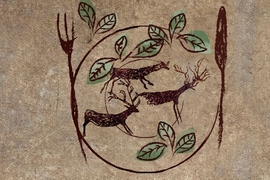 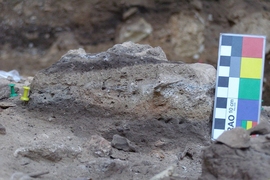 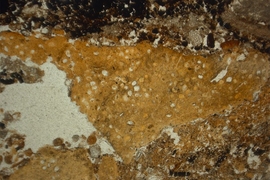 The popular conception of the Neanderthal as a club-wielding carnivore is, well, rather primitive, according to a new study conducted at MIT. Instead, our prehistoric cousin may have had a more varied diet that, while heavy on meat, also included plant tissues, such as tubers and nuts.

Scientists from MIT and the University of La Laguna in Spain have identified human fecal remains from El Salt, a known site of Neanderthal occupation in southern Spain that dates back 50,000 years. The researchers analyzed each sample for metabolized versions of animal-derived cholesterol, as well as phytosterol, a cholesterol-like compound found in plants. While all samples contained signs of meat consumption, two samples showed traces of plants — the first direct evidence that Neanderthals may have enjoyed an omnivorous diet.

“We have passed through different phases in our interpretation of Neanderthals,” says Ainara Sistiaga, a graduate student at the University of La Laguna who led the analysis as a visiting student at MIT. She and her colleagues have published their study in the journal PLoS ONE.

“It’s important to understand all aspects of why humanity has come to dominate the planet the way it does,” adds co-author Roger Summons, a professor of geobiology in MIT’s Department of Earth, Atmospheric and Planetary Sciences. “A lot of that has to do with improved nutrition over time.”

While scientists have attempted to reconstruct the Neanderthal diet, much of the evidence has been inconclusive. For example, researchers have analyzed bone fragments for carbon and nitrogen isotopes — signs that Neanderthals may have consumed certain prey, such as pigs versus cows. But such isotopic data only differentiate between protein sources — underestimating plant intake, and thereby depicting the Neanderthal as exclusively carnivorous

Other researchers recently identified plant microfossils trapped in Neanderthal teeth — a finding that suggests the species may have led a more complex lifestyle, harvesting and cooking a variety of plants in addition to hunting prey. But Sistiaga says it is also possible that Neanderthals didn’t eat plants directly, but consumed them through the stomach contents of their prey, leaving traces of plants in their teeth.

Equally likely, she says, is another scenario: “Sometimes in prehistoric societies, they used their teeth as tools, biting plants, among other things. We can’t assume they were actually eating the plants based on finding microfossils in their teeth.”

Signs in the soil

For a more direct approach, Sistiaga looked for fecal remains in El Salt, an excavation site in Alicante, Spain, where remnants of multiple Neanderthal occupations have been unearthed. Sistiaga and her colleagues dug out small samples of soil from different layers, and then worked with Summons to analyze the samples at MIT.

In the lab, Sistiaga ground the soil into a powder, then used multiple solvents to extract any organic matter from the sediment. Next, she looked for certain biomarkers in the organic residue that would signal whether the fecal remains were of human origin.

She and Summons then used the same geochemical techniques to determine the proportions of coprostanol — an animal-derived compound — to 5B-stigmastanol, a substance derived from the breakdown of phytosterol derived from plants.

Each sample contained mostly coprostanol — evidence of a largely meat-based diet. However, two samples also held biomarkers of plants, which Sistiaga says may indicate a rather significant plant intake. As she explains it, gram for gram, there is more cholesterol in meat than there is phytosterol in plants — so it would take a significant plant intake to produce even a small amount of metabolized phytosterol.

In other words, while Neanderthals had a mostly meat-based diet, they may have also consumed a fairly regular portion of plants, such as tubers, berries, and nuts.

“We believe Neanderthals probably ate what was available in different situations, seasons, and climates,” Sistiaga says.

Richard Wrangham, a professor of biological anthropology at Harvard University, says that since no isotopic signatures have yet been found for plants that might be eaten by Neandertals, determining whether Neanderthals consumed plants “has been entirely a matter of guesswork until recently.”

“These lovely new data on fecal sterols confirm what many people have been increasingly thinking, which is that something is wrong with the inference that Neanderthals were 100 percent carnivores,” says Wrangham, who was not involved in the research. “The Sistiaga data are a wonderful new source for challenging conventional wisdom. In the end it would not be surprising to find that Neanderthals show little difference from sapiens in their diet composition.”

Sistiaga, Summons, and their colleagues plan to use similar geochemical biomarker techniques, coupled with micromorphological analysis, to analyze soil samples in Olduvai Gorge, Tanzania — a 1.8-million-year-old site where some of the earliest evidence of human ancestry have been discovered.

“We’re working in a micro context,” Sistiaga says. “Until now, people have carried out residue analysis on pots, tools, and other objects, but 90 percent of archaeology is sediment. We’re opening a new window to the information that is enclosed in Paleolithic soil and sediment.”

“Researchers dug into the sediment and ground the samples to a powder for analysis at a sophisticated Massachusetts Institute of Technology (MIT) lab,” reports the AFP on new research that indicates that the diet of the Neanderthals included plants, as well as animals. The findings contradict the prior belief that Neanderthals were almost exclusively carnivorous.

In a piece for Salon, Sarah Gray reports that a team of researchers, “discovered 50,000-year-old human poop while excavating the ancient Neanderthal site El Salt, located in Spain near the port of Alicante on the Mediterranean.” Analysis of the fecal matter showed that the Neanderthals may have eaten more vegetables than previously thought.

Carolyn Johnson writes for The Boston Globe about MIT’s findings that the diets of Neanderthals included plants in addition to animals. The results, obtained by analyzing fecal samples, undermine previous beliefs that Neanderthals were carnivorous.

“Neanderthals spent at least some time digesting plants, according to a new study that analyzed fossilized ancient feces to find the most direct evidence yet of a varied diet for man’s ancestors,” writes Bloomberg News reporter Marie French.

Nicholas St. Fleur of NPR examines new findings from MIT researchers concerning the Neanderthal diet. "This opens a new window into Neanderthal diet because it's the first time we actually know what they digested and consumed," Ainara Sistiaga says.

“Chemical analysis of poop samples discovered at an archaeological site in Alicante, Spain, suggests Neanderthals may have enjoyed significant servings of plants too,” writes Washington Post reporter Gail Sullivan of new findings from MIT researchers concerning the diets of Neanderthals.

Al Jazeera America reports on research by scientists from MIT that indicates that Neanderthals ate plants, contrary to earlier beliefs about their diets. The researchers came to this conclusion after analyzing ancient fecal samples.

Jonathan Webb of BBC News reports on research showing that the Neanderthals ate vegetables. "If you find it in the faeces, you are sure that it was ingested," Ainara Sistiaga explains. "This molecular fossil is perfect to try to know the proportion of both food sources in a Neanderthal meal."

Monte Morin of the Los Angeles Times reports on new MIT researching showing the Neanderthals did eat vegetation. “Using gas chromatography-mass spectrometry, researchers studied the powdered samples for traces of stanols and sterols, lipids that are formed in the intestines when gut bacteria act on plant and animal matter,” Morin writes.

Traci Watso reports for USA Today about new evidence uncovered by a team of researchers from MIT that could be the earliest known evidence that the Neanderthals were, “omnivores who ate significant quantities of plant-based food.”

Writing for The Huffington Post, Jacqueline Howard reports that an analysis of ancient fecal matter by MIT researchers shows that the Neanderthals ate more vegetables than originally thought.

Evolution: It’s all in how you splice it

Getting to the root of genetics