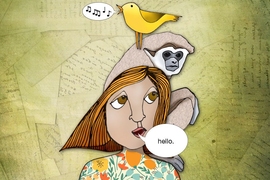 On the island of Java, in Indonesia, the silvery gibbon, an endangered primate, lives in the rainforests. In a behavior that’s unusual for a primate, the silvery gibbon sings: It can vocalize long, complicated songs, using 14 different note types, that signal territory and send messages to potential mates and family.

Far from being a mere curiosity, the silvery gibbon may hold clues to the development of language in humans. In a newly published paper, two MIT professors assert that by re-examining contemporary human language, we can see indications of how human communication could have evolved from the systems underlying the older communication modes of birds and other primates.

From birds, the researchers say, we derived the melodic part of our language, and from other primates, the pragmatic, content-carrying parts of speech. Sometime within the last 100,000 years, those capacities fused into roughly the form of human language that we know today.

But how? Other animals, it appears, have finite sets of things they can express; human language is unique in allowing for an infinite set of new meanings. What allowed unbounded human language to evolve from bounded language systems?

“How did human language arise? It’s far enough in the past that we can’t just go back and figure it out directly,” says linguist Shigeru Miyagawa, the Kochi-Manjiro Professor of Japanese Language and Culture at MIT. “The best we can do is come up with a theory that is broadly compatible with what we know about human language and other similar systems in nature.”

“Yes, human language is unique, but if you take it apart in the right way, the two parts we identify are in fact of a finite state,” Miyagawa says. “Those two components have antecedents in the animal world. According to our hypothesis, they came together uniquely in human language.”

The current paper, “The Integration Hypothesis of Human Language Evolution and the Nature of Contemporary Languages,” is published this week in Frontiers in Psychology. The authors are Miyagawa; Robert Berwick, a professor of computational linguistics and computer science and engineering in MIT’s Laboratory for Information and Decision Systems; and Shiro Ojima and Kazuo Okanoya, scholars at the University of Tokyo.

The paper’s conclusions build on past work by Miyagawa, which holds that human language consists of two distinct layers: the expressive layer, which relates to the mutable structure of sentences, and the lexical layer, where the core content of a sentence resides. That idea, in turn, is based on previous work by linguistics scholars including Noam Chomsky, Kenneth Hale, and Samuel Jay Keyser.

The expressive layer and lexical layer have antecedents, the researchers believe, in the languages of birds and other mammals, respectively. For instance, in another paper published last year, Miyagawa, Berwick, and Okanoya presented a broader case for the connection between the expressive layer of human language and birdsong, including similarities in melody and range of beat patterns.

Birds, however, have a limited number of melodies they can sing or recombine, and nonhuman primates have a limited number of sounds they make with particular meanings. That would seem to present a challenge to the idea that human language could have derived from those modes of communication, given the seemingly infinite expression possibilities of humans.

But the researchers think certain parts of human language actually reveal finite-state operations that may be linked to our ancestral past. Consider a linguistic phenomenon known as “discontiguous word formation,” which involve sequences formed using the prefix “anti,” such as “antimissile missile,” or “anti-antimissile missile missile,” and so on. Some linguists have argued that this kind of construction reveals the infinite nature of human language, since the term “antimissile” can continually be embedded in the middle of the phrase.

However, as the researchers state in the new paper, “This is not the correct analysis.” The word “antimissile” is actually a modifier, meaning that as the phrase grows larger, “each successive expansion forms via strict adjacency.” That means the construction consists of discrete units of language. In this case and others, Miyagawa says, humans use “finite-state” components to build out their communications.

The complexity of such language formations, Berwick observes, “doesn’t occur in birdsong, and doesn’t occur anywhere else, as far as we can tell, in the rest of the animal kingdom.” Indeed, he adds, “As we find more evidence that other animals don’t seem to posses this kind of system, it bolsters our case for saying these two elements were brought together in humans.”

To be sure, the researchers acknowledge, their hypothesis is a work in progress. After all, Charles Darwin and others have explored the connection between birdsong and human language. Now, Miyagawa says, the researchers think that “the relationship is between birdsong and the expression system,” with the lexical component of language having come from primates. Indeed, as the paper notes, the most recent common ancestor between birds and humans appears to have existed about 300 million years ago, so there would almost have to be an indirect connection via older primates — even possibly the silvery gibbon.

As Berwick notes, researchers are still exploring how these two modes could have merged in humans, but the general concept of new functions developing from existing building blocks is a familiar one in evolution.

“You have these two pieces,” Berwick says. “You put them together and something novel emerges. We can’t go back with a time machine and see what happened, but we think that’s the basic story we’re seeing with language.”

Andrea Moro, a linguist at the Institute for Advanced Study IUSS, in Pavia, Italy, says the current paper provides a useful way of thinking about how human language may be a synthesis of other communication forms.

“It must be the case that this integration or synthesis [developed] from some evolutionary and functional processes that are still beyond our understanding,” says Moro, who edited the article. “The authors of the paper, though, provide an extremely interesting clue at the formal level.”

Indeed, Moro adds, he thinks the researchers are “essentially correct” about the existence of finite elements in human language, adding, “Interestingly, many of them involve the morphological level — that is, the level of composition of words from morphemes, rather than the sentence level.”

Miyagawa acknowledges that research and discussion in the field will continue, but says he hopes colleagues will engage with the integration hypothesis.

“It’s worthy of being considered, and then potentially challenged,” Miyagawa says.