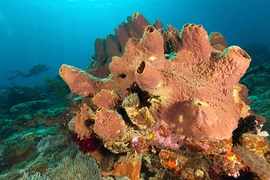 The first animal to appear on Earth was very likely the simple sea sponge.

New genetic analyses led by MIT researchers confirm that sea sponges are the source of a curious molecule found in rocks that are 640 million years old. These rocks significantly predate the Cambrian explosion — the period in which most animal groups took over the planet, 540 million years ago — suggesting that sea sponges may have been the first animals to inhabit the Earth.

“We brought together paleontological and genetic evidence to make a pretty strong case that this really is a molecular fossil of sponges,” says David Gold, a postdoc in MIT’s Department of Earth, Atmospheric and Planetary Sciences (EAPS). “This is some of the oldest evidence for animal life.”

The results are published today in the Proceedings of the National Academy of Sciences. Gold is the lead author on the paper, along with senior author and EAPS Professor Roger Summons.

Paleontologists have unearthed an extraordinary number of fossils from the period starting around 540 million years ago. Based on the fossil record, some scientists have argued that contemporary animal groups essentially “exploded” onto Earth, very quickly morphing from single-celled organisms to complex multicellular animals in a relatively short geological time span. However, the fossils that are known from before the Cambrian explosion are peculiar in many respects, making it extremely difficult to determine which type of animal was the first to the evolutionary line.

Summons’ lab has been looking for the answer in molecular fossils — trace amounts of molecules that have survived in ancient rocks long after the rest of an animal has decayed away.

“There’s a feeling that animals should be much older than the Cambrian, because a lot of animals are showing up at the same time, but fossil evidence for animals before that has been contentious,” Gold says. “So people are interested in the idea that some of these biomarkers and chemicals, molecules left behind, might help resolve these debates.”

In particular, he and his colleagues have focused on 24-isopropylcholestane, or 24-ipc for short — a lipid molecule, or sterol, that is a modified version of cholesterol. In 1994, Summons was part of a team, led by Mark McCaffrey PhD ’90, that first found 24-ipc, in unusually high amounts, in Cambrian and slightly older rocks. They speculated that sponges or their ancestors might be the source.

In 2009, a team led by University of California at Riverside Professor Gordon Love, then a postdoc in Summons’ lab, did the first detailed study of rocks in Oman. The researchers confirmed the presence of 24-ipc in 640-million-year-old rock samples, potentially representing the oldest evidence for animal life. That work utilized high precision uranium-lead dating techniques developed by EAPS Professor Samuel Bowring.

“This research topic has a 20-plus-year history intimately connected to MIT scientists,” Summons notes. “Now, in 2016 David Gold has been able to apply his skills and the new tools of the genomic era, to add a further layer of evidence supporting the ‘sponge biomarker hypothesis.’”

It’s known that some modern sea sponges and certain types of algae produce 24-ipc today, but which organism was around to make the molecule 640 million years ago? To answer this question, Summons and Gold sought to first identify the gene responsible for making 24-ipc, then find the organisms that carry this gene, and finally trace when the gene evolved in those organisms.

The team looked through the genomes of about 30 different organisms, including plants, fungi, algae, and sea sponges, to see what kinds of sterols each organism produces and to identify the genes associated with those sterols.

“What we found was this really interesting pattern across most of eukaryotic life,” Gold says.

By comparing genomes, they identified a single gene, sterol methyltransferase, or SMT, responsible for producing certain kinds of sterols depending on the number of copies of the gene an organism carries. The researchers found that sea sponge and algae species that produce 24-ipc have an extra copy of SMT when compared with their close relatives.

The researchers compared the copies to determine how they were all related and when each copy of the gene first appeared. They then mapped the relationships onto an evolutionary tree and used evidence from the fossil record to determine when each SMT gene duplication occurred.

No matter how they manipulated the timing of the evolutionary tree, the researchers found that sea sponges evolved the extra copy of SMT much earlier than algae, and they did so around 640 million years ago — the same time period in which 24-ipc was found in rocks.

Their results provide strong evidence that sea sponges appeared on Earth 640 million years ago, much earlier than any other animal life form.

“This brings up all these new questions: What did these organisms look like? What was the environment like? And why is there this big gap in the fossil record?” Gold says. “This goes to show how much we still don’t know about early animal life, how many discoveries there are left, and how useful, when done properly, these molecular fossils can be to help fill in those gaps.”

This research is supported, in part, by the Agouron Institute and the NASA Astrobiology Institute.

A new study by MIT researchers suggests that sea sponges may have been the first animal on Earth, CBS Boston reports. “Based on new genetic tests, researchers can say with confidence that molecules produced by sea sponges have been found in 640 million-year-old rocks.”