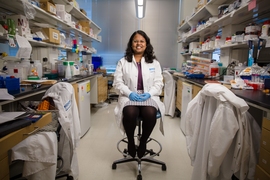 ↓ Download Image
Caption: PhD student Anasuya Mandal arrived on campus with a clear goal for her research. “I wanted to do something that would impact human health at the end of the day, and to make a product that somebody would have in their hands that they would use,” she says. 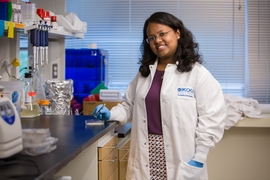 ↓ Download Image
Caption: PhD student Anasuya Mandal arrived on campus with a clear goal for her research. “I wanted to do something that would impact human health at the end of the day, and to make a product that somebody would have in their hands that they would use,” she says.
Credits: Photo: Casey Atkins 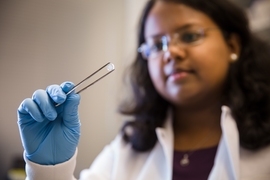 ↓ Download Image
Caption: PhD student Anasuya Mandal wasn’t sure about the specific nature of her research until she met Paula Hammond, the David H. Koch Professor of Engineering, who told her about a medical technology called microneedles. “That was the coolest thing I'd ever heard of,” Mandal says.

Caption:
PhD student Anasuya Mandal arrived on campus with a clear goal for her research. “I wanted to do something that would impact human health at the end of the day, and to make a product that somebody would have in their hands that they would use,” she says.
Credits:
Photo: Casey Atkins

Caption:
PhD student Anasuya Mandal wasn’t sure about the specific nature of her research until she met Paula Hammond, the David H. Koch Professor of Engineering, who told her about a medical technology called microneedles. “That was the coolest thing I'd ever heard of,” Mandal says.
Credits:
Photo: Casey Atkins

When Anasuya Mandal started her PhD in chemical engineering at MIT, she wanted to have a big impact and leave things better than she found them, a sentiment encapsulated by a Hindi phrase she often heard growing up, “janhit mein jaari,” which loosely translates into “continued in public interest.”

Whether developing microneedle technology to improve vaccine design and disease management, or joining student organizations to enhance student life, that is exactly what Mandal has done.

A journey to MIT

Mandal, who grew up in India, initially heard about MIT through the news articles she read when she was 8 or 9 years old and becoming interested in science.

“I thought, OK, there's this really great school in the world,” she recalls. “But I never thought that down the line I'd be here.”

Mandal’s interest in science and her high score on the national exam she took at the end of high school gained her admission to the Indian Institute of Technology Bombay, an exclusive engineering university. There, Mandal found herself drawn to research. For her, graduate school was a logical next step.

Mandal was attracted to the applied, interdisciplinary nature of the chemical engineering program at MIT, and she arrived on campus with a clear goal for her research.

“I wanted to do something that would impact human health at the end of the day, and to make a product that somebody would have in their hands that they would use,” she says.

It is an impulse that Mandal attributes in part to her parents, who are both doctors. However, Mandal wasn’t sure about the specific nature of her research until she met Paula Hammond, the David H. Koch Professor of Engineering and head of the Department of Chemical Engineering, who told her about a medical technology called microneedles.

“That was the coolest thing I'd ever heard of,” Mandal says.

Mandal, who is co-advised by Hammond and Darrell Irvine, a professor of materials science and engineering and of biological engineering, has been completely absorbed in research on microneedles ever since.

A tiny device with a big impact

Microneedle technology, which has been around for a couple of decades, is based on a simple concept: Tiny cones, or microneedles, are attached to a small patch that is applied to the surface of the skin like a Band-Aid. The cones penetrate the skin, but not deeply enough to hit nerves or blood vessels.

Most research on microneedles has focused on their potential for simple, efficient medication and vaccine delivery. However, Mandal realized microneedles could be useful in two completely different capacities: as a tool to aid chronic disease management, and as a way of gathering information to improve vaccine design.

Mandal’s device consists of 70-80 clear, plastic microneedles, each 0.6 millimeters long and coated with a dehydrated hydrogel. The microneedles are attached to a clear plastic disc, 1 centimeter across. When the device is applied to the skin, the microneedles penetrate just deep enough to reach into the dermis, just underneath the protective top layer of the skin.

“It feels like a Lego block that’s pressed up against your skin,” Mandal says. “It takes maybe a day or two to regenerate the skin, and you might not even have any redness, inflammation, or swelling.”

One application of Mandal’s research is for people with autoimmune diseases such as lupus who must use medication to manage disease flares. Flares can be predicted by an increase in certain biomarkers, which are currently monitored with monthly blood draws. However, these biomarkers are also present in the interstitial fluid (the fluid in tissues) that is the target of Mandal’s microneedle device.

The dehydrated hydrogel on the microneedles absorbs the fluid, which can then be separated out and analyzed. The process is simple and painless, and Mandal envisions it being used by patients at home to monitor their biomarker levels on a much more frequent basis.

“It basically gives them a chance to regulate their medication and have a better quality of life,” she says.

Mandal’s research also has applications for vaccine design. In general, a successful immunization introduces just enough of a virus (or other foreign substance) to prompt the formation of resident memory cells that remain in the tissues and are prepared to immediately recognize the virus and attack it if it returns. However, when a vaccine is administered, it is difficult to know how many resident memory cells form, where they form, how long they live, etc.

The dehydrated hydrogel that coats Mandal’s microneedles can be laden with chemical cues that are released once the gel is rehydrated with interstitial fluid. Over a 12- to 24-hour period, the cues attract nearby resident memory cells, which become embedded in the gel. The cells can be removed with the patch, separated out, and studied to inform vaccine design.

“I think what's most exciting is that we can pull out information about the immune system with my device, that is not in the blood,” she says. “So this becomes a diagnostic tool capable of supplementing the data you would gather from a blood draw.”

Right now Mandal is testing her device on mice, and she hopes it will soon be used on larger animals.

During her time at MIT, Mandal has also been committed to improving life for her fellow students. She has been part of an Institute-wide program called REFS, short for Resources for Easing Friction and Stress. Through the program, Mandal was trained in mediation and conflict management, so she could serve as a sounding board and a confidential resource for her peers. She then started a REFS program in the Department of Chemical Engineering.

For the past year, Mandal has also been involved in the graduate student advisory board for chemical engineering, which advises the faculty and administration about how to improve the graduate student experience. Mandal has worked on negotiating better hours for teaching assistants, revamping the feedback process between advisors and students, and finding ways to improve advisor-student relationships.

Working to improve her school is nothing new for Mandal; as an undergraduate she served as a student mentor and wrote for her college newsletter.

“The basic motive has always been to make things better for anybody who's stepping into my shoes after me,” she says.

After finishing her PhD, Mandal hopes to learn more about the business side of medical products, gaining knowledge that will complement her scientific skill set and help her start answering some big questions.

“So many people make products and devices,” she says. “But why do some of them succeed? Why do some of them fail? What are the factors that make something successful and what do you keep in mind? How do you strategize about all of these things?”

Mandal is particularly interested in health care consulting, which would allow her to utilize her scientific knowledge while helping pharmaceutical and biomedical companies figure out how to develop their products and bring them to market. Mandal is excited about the fast pace of consulting and the possibility of having an immediate impact. For her, it offers the opportunity to step away from the lab bench and take a more big-picture approach to the biopharma landscape.

Somewhere down the line, Mandal even envisions starting her own company to commercialize her microneedle device or another medical product.

“I've always wanted to have a way to make somebody else's life better,” she says. “A way to utilize the knowledge that I have so that it makes the world a better place.”

A safer way to vaccinate