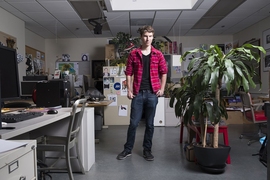 ↓ Download Image
Caption: As an undergraduate at MIT, Ned Burnell began thinking about the entire process of making products, and all of the decisions that lead to designing products in a particular way. This is what motivated him to pursue mechanical engineering. “It was coming here and seeing, oh, there are actually all these ways in which these things do get made by people, and hey, I can be one of those people,” Burnell says.
Credits: Photo: M. Scott Brauer

Caption:
As an undergraduate at MIT, Ned Burnell began thinking about the entire process of making products, and all of the decisions that lead to designing products in a particular way. This is what motivated him to pursue mechanical engineering.
Credits:
Photo: M. Scott Brauer

When Edward (Ned) Burnell sees a design problem, he is always ready to find a better solution. Even while chatting with a journalist outside his office, he points out ceilings and windows in different spaces and describes how he would improve them.

For Burnell, a master’s student in mechanical engineering, thinking about design is a way of life; whether he is creating a novel windmill or improving engineering software, he enjoys using his skills to figure out innovative solutions to familiar problems.

Growing up off the grid

Burnell’s unconventional way of looking at the world can be traced back to his upbringing in Northern California. Burnell describes his childhood home in Mendocino County as “off the grid,” located in a remote area that had only dirt roads at the time.

“The town I grew up in actually is not even a town,” he says. “There's no municipal service besides the fire department. There is one gas station, one grocery store across from the post office, a Presbyterian church, and a K-3 school.”

Burnell was homeschooled by his parents until high school, when he began attending a nearby public school started by people in his community. His high school was different than most: Conventional desks and chairs were replaced by couches, and students could wander in and out of the main classroom in the center of school at any point during the day. Burnell enjoyed his school’s unusual culture and appreciated its focus on intrinsic motivation.

Finding his place at MIT

Burnell, who also has a BS in mechanical engineering from MIT, didn’t expect to attend such a large university, but during a visit he was immediately attracted to the vibe of the dorms in East Campus, such as the one where he lived previously, which he describes as wacky and a little bit punk.

“It's in this old bunker that has really thick walls,” he says. “Everyone just paints all over everything. It's like an old industrial district, safe because no one wants to mess with it.”

Growing up, Burnell hadn’t given much thought to what went into designing the products he saw around him — a finished bicycle, cup, or piece of furniture. As an undergraduate at MIT, however, he began thinking about the entire process of making products, and all of the decisions that lead to designing products in a particular way. This is what motivated him to pursue mechanical engineering.

“It was coming here and seeing, oh, there are actually all these ways in which these things do get made by people, and hey, I can be one of those people,” says Burnell.

As an undergraduate, Burnell also began thinking about how improving lesson design can help students learn more effectively. He traveled to Ghana, first as part of MIT’s D-Lab and later on a fellowship from MIT’s Priscilla King Gray Public Service Center, where he taught students hands-on engineering lessons. One particularly successful lesson involved guiding students as they built a battery to power an LED light, using basic materials such as copper wire, a bag of charcoal, a soda can, and salt water.

“These were very familiar objects,” he says. “We could've, on the walk to school, gotten literally all the products, and the fact that they did this really unexpected thing [made the students] really curious — students were in disbelief.”

Burnell also worked on creating an informal, interactive classroom environment where students were presented with open-ended projects that encouraged them to explore and ask questions, something they hadn’t previously experienced in their more traditional, fact-based British educational system.

Before returning to MIT for grad school, Burnell spent a year working at Makani Power, a company in Almeda, California, that is developing innovative approaches for harnessing wind power. Burnell’s project involved taking the conventional windmill design, a tower with a giant wind turbine on top, and changing it to make something better suited to the environment.

“With this turbine you have a tether, so it's like a kite. It's much smaller; you have a plane flying, and you have little propellers on it that slow it down, and it's just gliding around. It sounds like an insect and looks kind of like a bird,” he says. “Two people could carry it, and it would make about 20 kilowatts an hour, so that [could power] about 10 houses, in a 20-mile-an-hour wind.”

As a grad student at MIT, Burnell has continued to work on projects that improve existing designs. Last year, Burnell took part in MIT’s Assistive Technologies Hackathon, where he and his team designed a better version of a tool called a “sip-and-puff joystick.”

People with cerebral palsy or muscular dystrophy diseases often don’t have the hand precision required to manipulate a conventional computer mouse or smartphone screen, but they are able to control the position of their mouths. The sip-and-puff joystick is a medical device with a mouthpiece that responds to sips and puffs of air, which are translated into different actions on a computer or smartphone. However, because conventional sip-and-puff joysticks are designed for hospital use, they tend to be large and overbuilt, with poor portability and limited battery life.

Burnell and his team decided that they could improve on this design to make something more useful for everyday life. Their version, the Puffin Joystick, was created in collaboration with Adriana Mallozzi, who has cerebral palsy and has used many different technologies over the years. It consists of a mouthpiece attached to a minimalist waterproof tube that can easily be clamped onto any chair and repositioned as needed. It also has a long battery life and is cheaper than other versions.

Currently, Burnell’s research focuses on improving existing engineering design software. One project involves testing design programs that are used to solve structural problems. In the standard Computer Assisted Design (CAD) program, an engineer draws a structural design and hits a button to analyze it, at which point she can see every piece of the structure, color-coded based on how stressed it is. Burnell changed the program so every time a beam is resized, the program automatically redraws the structure, rather than requiring the engineer to click a button.

Burnell explains that this research aims to answer basic questions about the design of these programs, such as “How much does [a modification to the program] change not just how good your designs are, but how much you actually explore? Are you more willing to try something a little bit different, or, with a more frustrating tool are you more likely to just say, ‘Alright, this is good enough?’”

He is hoping that simple changes to the software will encourage engineers to spend more time exploring and thinking in novel ways during the design process.

Options for the future

Burnell is planning to pursue a PhD in mechanical engineering, though he is keeping an open mind about his future, since in his experience, “Generally things just pop up.” However, no matter where his life takes him, he is determined to use his engineering and creative thinking skills to continue improving the world around him.

“I think a lot of change happens just because people start having higher expectations. They start asking for more and saying ‘this [design] is good, but it's not good enough for me,’” Burnell says.

In search of a major she loves

Powering desalination with the sun