In search of a major she loves 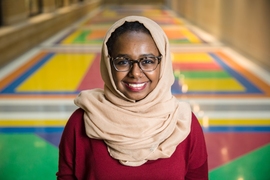 ↓ Download Image
Caption: “Most people in my family who go abroad just go for graduate school; no one goes as a 17-year-old,” Amna Magzoub says. “I had to convince a lot of people that it was really worth it.” 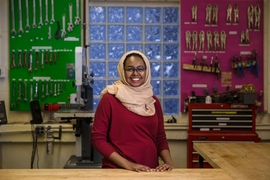 ↓ Download Image
Caption: “I never saw myself doing that kind of applied engineering because I was never exposed to it throughout high school or even here,” Amna Magzoub says. “I realized, man, I really like what I'm doing. I can talk about whatever I'm doing forever, and I've never been able to do that. I think that's when things turned around."

Caption:
“I never saw myself doing that kind of applied engineering because I was never exposed to it throughout high school or even here,” Amna Magzoub says. “I realized, man, I really like what I'm doing. I can talk about whatever I'm doing forever, and I've never been able to do that. I think that's when things turned around."
Credits:
Photo: Casey Atkins

Amna Magzoub is not one to settle for the easy choice, and she certainly didn’t take the most traditional or direct path to mechanical engineering at MIT — she switched majors twice, determined to find something that truly inspired and excited her. However, over the past four years, as she has been exploring the many academic opportunities MIT offers, Magzoub has kept her sights set on developing practical skills she can use to help people back home in Sudan.

Magzoub lived in two different states in the United States while her father was finishing his graduate studies, before returning to Sudan with her family at age eight. Her early moves taught her how to adapt to new situations.

“My life has always been new adventure, new place, new system,” she says.

And the adventure didn’t stop after her arrival in Sudan. Magzoub, and her family, assumed she would attend a local university for college, but she decided to apply to MIT. Once she was admitted, she knew she had to go, even though it was an ocean away and not necessarily what her family anticipated.

“Most people in my family who go abroad just go for graduate school; no one goes as a 17-year-old,” she says. “I had to convince a lot of people that it was really worth it.”

“I started to realize that I would like to work with people, because I think in the back of my head I always wanted to move back to Sudan and benefit my community there,” she says. “As a chemical engineer the opportunities were more factory-scale and industry-oriented.”

With her desire to help people in mind, Magzoub began to consider medical school. She started taking pre-med classes and conducted research with Kay Tye, an assistant professor of neuroscience. Magzoub’s study investigated how mice learn from observing a partner and what regions of the brain are responsible for observational learning. Magzoub particularly enjoyed being involved in the entire research process and having the independence to design and run her own experiments.

But as Magzoub looked around and saw peers that were so excited about what they were doing, she realized that she still hadn’t uncovered her academic passion, and she needed to continue exploring.

“And that's OK here, because there are so many different avenues that MIT shows you,” she says. “MIT is a comforting environment in which you can try out different things with no real risk.”

Then, during her the fall semester of her junior year, Magzoub took a D-Lab course that helped her finally find her niche. The course partnered students with a community in northern Tanzania that has excess avocados and wanted to successfully produce avocado oil, which is a valuable commodity. The local pressing method was not able to remove all the water from the oil, so they needed to improve the technology. Magzoub and her classmates first developed a baking technique to dry out the avocados before pressing, but that oxidized the avocados too much. They finally settled on a centrifuging method, essentially a cold-press approach. During the project, Magzoub had her first opportunity to work in shop, as her classmates taught her the basics of drilling, using bandsaws, and welding metal.

“It's all these skills that I never thought I would ever need,” she says. “I never thought of myself doing that kind of stuff. And now here I am in the shop.”

The whole experience was an eye-opening one for Magzoub, and it motivated her to declare a major in mechanical engineering at the end of her junior year.

“I never saw myself doing that kind of applied engineering because I was never exposed to it throughout high school or even here,” she explains. “I realized, man, I really like what I'm doing. I can talk about whatever I'm doing forever, and I've never been able to do that. I think that's when things turned around.”

Since then, Magzoub has become involved in other mechanical engineering projects. In another D-Lab course she worked with a community in Guatemala to create a mold for locally made, cheaply produced crutch-tips to be used by people who are permanently on crutches. She has also designed robots and even yo-yos.

Magzoub’s experiences at MIT have helped her envision how she might use her mechanical engineering skills to help people in Sudan.

“In the future the plan is that I will take this expertise and move to Sudan. I see myself working with a community on sourcing a particular problem and then solving that with what we have,” she says. For now, she thinks, “I'm here and I'm grateful. OK, what am I going to do with that? And giving back to the community I was raised in and where I'm from” is the answer.

In fact, after her first year, Magzoub decided to bring some of what she had learned at MIT back to Sudan. Magzoub and a group of fellow Sudanese MIT students organized a hackathon in Sudan over the summer. The group advertised at local universities, lined up sponsors, and found a space they could use.

“And that's pretty much all the ingredients you need,” says Magzoub.

The week-long hackathon attracted around 30 people, who organized into smaller teams and focused on ideas for improving Sudan, which ranged from developing a grocery delivery system to making recycling more accessible. The event, now an annual one, has expanded over the past few years to include more participants, mentors, and judges.

While at MIT, Magzoub has also enjoyed the challenge of being completely on her own, far from home, which has forced her to develop her social network from scratch.

“It's intimidating because you're meeting people for the first time, but at the same time it builds confidence that you are learning who you are, learning what you're worth,” she says. That confidence can come in multiple forms, she says, “whether it's academically, developing the toughness and how to learn in a different country, or socially, figuring out how to adapt in an environment where you barely know anyone.”

As part of MIT’s Addir Interfaith Program, Magzoub, who is Muslim, had the opportunity to exchange ideas and cultures with people from very different backgrounds, which expanded her worldview while pushing her to think more deeply about her own beliefs.

“That was a direct way of really engaging with others who have different faiths or belief systems than I do,” she says. “And it reinforces [the importance of asking] OK, why do I believe these things, why are these values important to me?”

Magzoub will take an additional year to finish her degree and plans to graduate in May 2017, a sacrifice she considers completely worth it.

And for her, the journey through MIT has taught her as much as any of her academic courses.

“I believe that there's some kind of path or some kind of destiny that I'm supposed to reach, and all these experiences and all these things that I'm doing are little pieces and skills I need to take me to the next steps,” she says. “I think every choice in my life was for a purpose. Wherever I go, it won't be because I was too timid to do something else. I want to live a life with no regrets.”