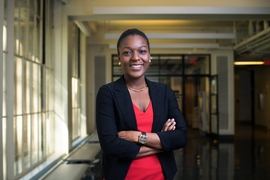 ↓ Download Image
Caption: “I think the flexibility of having the opportunity to discover what you're interested in, to pursue these things, and to create a space for yourself where you can feel comfortable was what drove me to MIT,” Larissa Senatus says.
Credits: Photo: Ian MacLellan 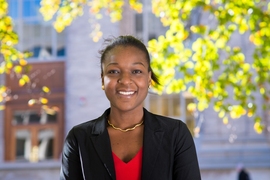 ↓ Download Image
Caption: “I think the flexibility of having the opportunity to discover what you're interested in, to pursue these things, and to create a space for yourself where you can feel comfortable was what drove me to MIT,” Larissa Senatus says.
Credits: Photo: Ian MacLellan

Caption:
“I think the flexibility of having the opportunity to discover what you're interested in, to pursue these things, and to create a space for yourself where you can feel comfortable was what drove me to MIT,” Larissa Senatus says.
Credits:
Ian MacLellan

Larissa Senatus has been immensely curious about the world around her ever since she was very young.

“I was always the one child that broke everything because I wanted to put it back together and see how it worked,” she explains. “I almost burned down my house once because I decided that it was a good idea to cut out the microwave cord and look inside the wires, and then put them back together.”

Senatus, a mechanical engineering major, has found many opportunities to explore new subjects during her time at MIT, where her curiosity about how things work and enthusiasm for hands-on discovery have continued to motivate her.

Senatus grew up in Port-Au-Prince, Haiti, and she became interested in engineering while attending a small, all-girls Catholic high school. She didn’t know any female engineers, though her mother works as a maritime manager, an atypical profession for a woman in Haiti. “Maybe seeing that erased all sorts of barriers for me,” Senatus says. “And I never asked myself the question of whether or not I could do the work of an engineer.”

“I think the flexibility of having the opportunity to discover what you're interested in, to pursue these things, and to create a space for yourself where you can feel comfortable was what drove me to MIT,” she explains.

Senatus has explored many different subjects at the Institute, within engineering and beyond. She particularly appreciates MIT’s HASS (Humanities, Arts and Social Sciences) course requirement, which she says has helped her become a more well-rounded student.

Senatus gained her first hands-on research experience as a freshman, in a biology lab. Although she ultimately decided to pursue mechanical engineering, this experience got her hooked on doing scientific research.

The summer after her sophomore year, Senatus conducted mechanical engineering research during a National Science Foundation Research Experience for Undergraduates (NSF-REU) in the Center for Sensorimotor Neural Engineering at the University of Washington. The team was building a quad rotor for a drone that imitates the flying mechanics of a moth, and Senatus was tasked with designing and building a structure to support the quad rotor’s electronics system. Senatus used a 3-D printer to produce parts based on her designs, and after many trials she finally created a piece that could survive the printing process and function within the quad rotor.

“For me that was a huge design experience and a very autonomous process because my supervisors in that lab said you have the flexibility to do really whatever you want,” Senatus says. “I went from knowing nothing to having a built part at the end of the summer.”

Senatus is currently intrigued by nanotechnology and understanding how things function on a very small scale. A recent nanoengineering course at MIT exposed her to many different applications of nanotechnologies, such as building small, intricate parts on a 3-D printer, or visualizing minute biological features that may be useful in designing robotics. One of her favorite moments was imaging a bee’s eye.

“When you see a bee, you don't really think about the structure of its eye,” she explains. “But then when you image it, you find out so many different features that you wouldn't have imagined existed.” She found the course so fascinating that she is considering pursuing nanoengineering research after MIT.

Senatus has also been involved in the Gordon Engineering Leadership (GEL) Program, which helps MIT engineering students hone their leadership skills as they work on engineering problems in an interactive group setting. Each year, about 100 MIT juniors are accepted as GEL 1 students.

Throughout the program, students are placed into small teams that must work together in role-playing situations to solve complex engineering programs. The students rotate as the project leader, and for Senatus, who describes herself as a generally shy person, her time as a GEL 1 student taught her how to assert herself and work well in group settings.

“It's often very easy to get sucked into the classes, and the problem sets, and the tests that are coming up,” Senatus says. “But having the opportunity to be in a program that takes me one step further, that puts me in situations where I actually get to practice some of the things that are not taught in class, is very important.”

The following year Senatus returned to the program as a GEL 2 student and continued to build her leadership skills as she took on more responsibilities such as improving the lab designs and guiding the GEL 1 students through the labs.

Learning beyond the classroom

Senatus will graduate from MIT in January 2016, and she eventually plans to return to Haiti, where she hopes she can use her experiences to encourage students to consider a wider variety of professions.

“I would like to push people to pursue these more technical fields and these very interesting aspects of life and how things function that they wouldn't necessarily imagine doing,” Senatus explains.

In particular, Senatus believes that high school students in Haiti do not have enough opportunities to experience research and learning beyond the classroom. While she was able to overcome this setback, she thinks other students may be deterred from pursuing fields like engineering.

“I want to encourage people to go beyond that curiosity as a child growing up and really continue to explore those things on a bigger level,” Senatus explains. “I want them to know that they can always step out of the boundaries of what they learned in school to discover something new.”

Senatus admits that while her household tinkering may have been a bit inconvenient for her parents, she gained a lot from her early experiences of freely exploring her surroundings. In mechanical engineering, she has finally found a field that fulfills her desire to understand how things work.

“I really want to have a hands-on career that allows me to actively create things and see things happen from start to finish,” says Senatus. “I think that's the most satisfying part for me as an engineer: to be able to see the result of my work at the end of the day.”