Why is it so hard for human beings to address climate change? What can motivate effective action?
Kathryn M. O'Neill | School of Humanities, Arts, and Social Sciences
Publication Date:
Press Inquiries 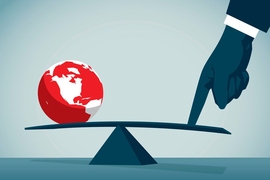 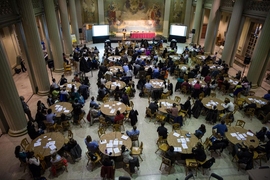 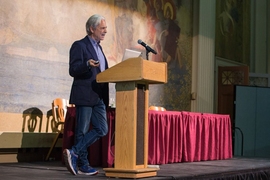 ↓ Download Image
Caption: The keynote speaker for the event was Dale Jamieson, a professor of environmental studies and philosophy, an affiliated professor of law and bioethics, and the chair of the Environmental Studies Department at New York University.
Credits: Photo: Casey Atkins 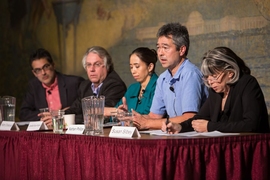 Caption:
The keynote speaker for the event was Dale Jamieson, a professor of environmental studies and philosophy, an affiliated professor of law and bioethics, and the chair of the Environmental Studies Department at New York University.

The ethical challenges presented by climate change and the question of what individuals — and academic institutions like MIT — can do to effect change drew approximately 250 people to Morss Hall at MIT on Thursday, Nov. 17 for an MIT-wide forum titled “Climate Change: Ethics in Action.”

Sponsored by the Office of the Vice President for Research and Radius (an initiative of the Technology and Culture Forum), the forum was part of an agreement created by the student-led group Fossil Free MIT and Vice President for Research Maria Zuber in March, to further advance the Institute’s responses to climate change. The goal for the event was to explore the ethical dimensions of climate change, as well as the ethical responsibilities of many different parties involved in the phenomenon.

A question for all of us

The three-hour forum featured a keynote address by Dale Jamieson, professor of environmental studies and philosophy at New York University and author of “Reason in a Dark Time: Why the Struggle to Stop Climate Change Failed — and What It Means for Our Future,” followed by dinner and a panel discussion among five scholars in fields ranging from atmospheric science to philosophy.

Zuber shared a key thought in a video that launched the event: “Science has performed its role adequately,” she said “[but] it cannot tell us what our obligations are to future generations. Determining how to respond to climate change is a question for all of us.”

Introduced by Melissa Nobles, the Kenan Sahin Dean of the School of Humanities, Arts, and Social Sciences, Jamieson reinforced this idea, beginning his talk by outlining the history of climate science, from Joseph Fourier's 1824 discovery that the atmosphere traps heat, to the present day. Among the growing body of evidence he cited was a 1979 study by the National Academy of Sciences that said, “A wait-and-see policy may mean waiting until it's too late” — which, Jamieson added, “is pretty much the policy that has been followed.”

Sources of inaction: Human nature and the structure of democracies

The key question at this point, Jamieson said, is: “Why, despite the steady growth of scientific knowledge, policy initiatives at every level, and an active civil society, have we failed to act effectively? What's gone wrong here?”

Those who deny the existence of climate change, while troubling, are not the primary culprit, Jamieson said. At the most fundamental level, the difficulty in addressing climate change lies in human nature and in the structure of democracies. “Democracies are supposed to act in the interest of the governed. It's not part of the ethos that [a government] should govern for all those it affects” more broadly, such as future generations and those outside national borders, he said.

Furthermore, since climate change is the result of millions of individual actions taken over time, the moral compunction to change behaviors is diluted. “Everyday reality doesn't hold us morally responsible for most of our behavior that contributes to climate change,” Jamieson said. “In climate change, we have a case where terrible things happen in the world, yet no one feels responsible.”

Fundamentally, people find it difficult to address issues that are abstract, long-term, or remote in time or space. “The problem is that ethics begins with human psychology,” Jamieson said. “If CO2 was sickly green and stunk, we probably would have done something about it already.”

The solution, he said, is to show the connection between daily human actions and climate change in a way that is “visual, proximate, and dramatic.” As an example, Jamieson cited the successful campaign to end Britain's slave trade in the early 1800s; activists at that time used powerful language and visual imagery to link behaviors (such as buying slave-trade sugar) with the viciousness of slavery.

Jamieson said the goal now must be to help people feel they are capable of addressing climate change. “Together, collectively, we've caused this problem, yet as individuals we feel powerless.” Therefore, he said, “We must begin with the recovery of agency. We must hold ourselves and others responsible.”

Jamieson's talk was followed by a panel discussion that expanded on the theme of motivating action and went on to explore what role universities can play in addressing the climate problem.

Professor Kieran Setiya, acting chair of MIT Philosophy, moderated the discussion among the four panelists: Kerry Emanuel, MIT’s Cecil and Ida Green Professor in Earth and Planetary Sciences; Susan Silbey, MIT’s Leon and Anne Goldberg Professor of humanities, sociology, and anthropology and a professor of behavioral and policy sciences at the MIT Sloan School of Management; Janelle Knox-Hayes, the Lister Brothers Associate Professor of Economic Geography and Planning in MIT’s Department of Urban Studies and Planning; and Nathan Phillips, professor of earth and environment at Boston University.

One way to motivate change in the current political climate, Emanuel suggested, is to move away from the climate change argument and toward an economic motivation. Noting that the $6 trillion energy market is already making the transition away from fossil fuels, he said: “Does this country want to be at the leading edge of that transformation or the trailing edge? I would say leading. Then you have to price the externalities of carbon.”

Knox-Hayes, the economist on the panel, agreed. “It's hard to imagine a future in which we're still using fossil fuels. That's why China is so aggressive in the development of renewable technologies. ...They realize fossil fuels won't be the energy source of the future, and they want to control energy markets,” she said.

Silbey assigned some of the blame for inaction on the tendency of educational institutions to focus on individual behaviors and self-interest. “We ignore any attention to social organization — that is, how we mobilize [and] aggregate individual actions,” she said. “Thus, I think we have been quite complicit in the creation of this crisis, and that's why our reaction has been so feeble.”

She recommended that MIT require a class centered on addressing the question of what constitutes "the good life" for human beings. Emanuel in turn suggested ensuring people learn history — particularly the connection between climate change and armed conflict. “Food and water shortages and very often catalysts for revolutions and wars,” he said, referring to two likely effects of climate change. “That's the big thing to worry about.”

Phillips joined others in thanking Fossil Free MIT for bringing climate change issues into sharp focus. He said he thought students deserve much of the credit for moving academic institutions to address climate change and urged them to continue the work.

Emanuel agreed that students can be a powerful force for change. “I would say that the most effective thing students in particular can do is act collectively,” he said. “I think politicians pay attention when they sense there is a very strong unified sentiment coming from young people.”