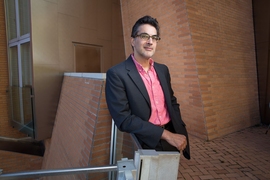 Famous philosophers are often depicted as taking up the subject for reasons that, in retrospect, seem obvious. Plato, it is said, turned toward philosophy after the execution of Socrates soured him on everyday Athenian politics. The young David Hume became fascinated by Cicero’s philosophical writings. Jean-Paul Sartre claimed he grew up reading his way through his grandfather’s library.

Kieran Setiya, a philosophy professor at MIT, was drawn into the discipline in a slightly less traditional manner: “I got interested in philosophy through science fiction,” he says.

As a teenager, growing up in England, Setiya dove into the works of H.P. Lovecraft, the influential 20th-century American author of horror-strewn stories filled with monstrous aliens. Though it might not seem obvious at a glance, some of those stories raise philosophical questions about our ability to comprehend the universe; indeed, Lovecraft read fairly widely in philosophy.

“I realized eventually what I was excited about in Lovecraft was the philosophical questions his stories were raising,” Setiya says. From reading Lovecraft’s published correspondence, Setiya learned, “He was reading Nietzsche and Schopenhauer, Bertrand Russell, Lucretius, a bunch of philosophers, and I thought, ‘Ah, if that’s what he was reading, that’s what I should read.’”

While Setiya ultimately plunged into ideas that have taken him far away from science fiction, his work is firmly grounded in this world. He has written two books, and many papers, on the foundations of our moral agency and our ability to make ethical judgments; lately, Setiya has been writing on the ways philosophy can help people think about “midlife crises.” He also recently joined MIT’s noted philosophy program.

“The department has a really uniquely collegial and supportive atmosphere,” Setiya says.

Setiya grew up in Hull, in Yorkshire — “not the beautiful, scenic part of Yorkshire,” he notes — as it was painfully changing from an industrial to a postindustrial city.

As an undergraduate Setiya attended Jesus College, at Cambridge University; by the time he started, he wanted not just to read philosophy, but to become a practicing philosopher.

“I wanted to just keep doing philosophy indefinitely,” Setiya says. He went to graduate school at Princeton University and received his doctorate in 2002, having turned his attention to the study of ethics; his first faculty position was at the University of Pittsburgh, which also has a strong philosophy program.

“The questions I’m mostly drawn to are ones that are big naïve questions that everyone is asking themselves,” Setiya says.

Such as: “Why be good?” His first book, “Reasons without Rationalism,” published in 2007 by Princeton University Press, explores that question in concise form. As Setiya sees it, when we ask ourselves if we should act morally, we are not really making a calculus about a detached set of ethical principles; rather, those decisions are intimately connected to what we believe to be the virtues of character we already possess, such as benevolence, generosity, and so on.

Or, as Setiya notes, “One commonsense reaction to the question of, ‘Why should I do what a good person would do,’ is: ‘What do you mean? Isn’t that how ‘should’ works?’ In a way, the book attempts to vindicate that dismissive reaction to the question.” This line of inquiry leads Setiya into the realm of “action theory,” the branch of philosophy that reflects on the nature of human agency.

Setiya’s second book, “Knowing Right from Wrong,” published in 2012 by Oxford University Press, is about how we form a basis for moral knowledge; its line of inquiry “falls naturally out of the first book,” as Setiya puts it. In a world where we disagree about moral issues with others, how can we determine what is objectively right?

“It’s easy to be gripped by the thought that there’s something disturbing about the contingency of our moral beliefs,” Setiya observes. “It’s much harder to say exactly what’s worrying about it. The book is an attempt to take that worry and make it precise and figure out how to answer it.” Setiya tackles a variety of epistemological concerns about our ability to make ethical judgments, ultimately rejecting those objections and concluding that a durable moral system can in fact be “biased toward the truth.”

Walking you through the midlife crisis

Setiya’s current work has taken a slightly more applied turn — addressing the midlife crisis many people experience, whether it is centered on concerns about mortality, the meaning of life, or other issues.

This crisis, Setiya wrote in a paper published last year in the journal Philosophers’ Imprint, “is less about fear of death than about what to make of mortal life.” One remedy, Setiya suggests, is to pursue “atelic” activities — those without a goal-oriented termination. Trying to make partner at a firm is telic; being social for its own sake is atelic. Making partner could leave you feeling depressed: “Is this all there is to life?” But spending time with friends is repeatable throughout life.

“You can stop doing these things [atelic activities], and you eventually will, but you cannot finish or complete them in the relevant sense,” Setiya writes. “It is not just that you can repeat them. … There is no outcome whose achievement exhausts them.”

In his teaching, Setiya is also bringing new topics into his courses on ethics; this fall, he will devote a significant portion of one introductory class, course 24.02 (Moral Problems and the Good Life), to the issue of climate change.

“I really feel compelled right now by questions about climate change ethics … the worry that nothing I do may make a difference, the fact that decisions we’re making in the next generation will affect many billions of humans, or possibly even whether human life will exist in a few hundred years’ time,” Setiya says. “I feel there are very challenging, often upsetting, but unavoidable questions raised there.”

Indeed, he adds, “I want to think about a way to teach it that’s not just demoralizing.”

After all, future climate projections are increasingly resembling what was once, well, science fiction. Perhaps Setiya’s early fascination with otherworldly scenarios will once again place him on solid philosophical ground.

Writing for New Statesman, Prof. Kiernan Setiya examines the potential impact on our sense of identity caused by the transition to communicating and connecting with one another virtually during the Covid-19 pandemic. Setiya notes that he hopes “our isolation leads us to appreciate what we really are, as well as what it means to be with others, in person — as bodies, and not just minds.”

Boxes, books, and bananas: A peek at the MIT Science Fiction Society