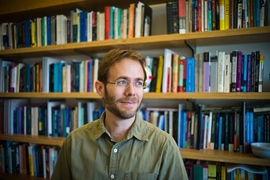 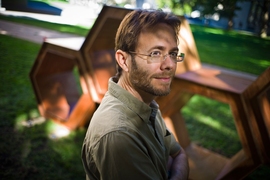 Caption:
MIT associate professor of philosophy Brad Skow, in front of &#8220;The Hexagons,&#8221; a sculpture on the MIT campus by Tara Ebsworth &#8217;14. The sculpture was funded by the Council for the Arts at MIT and the MIT Art Scholars program.
Credits:
Dominick Reuter

We all know that time passes — or so it seems. But what do we think time is really doing? Is it moving by us? Standing still as we wade through it? Our inability to resolve this question is revealed by the indirect way in which we discuss the subject.

“When you ask people, ‘Tell me about the passage of time,’ they usually make a metaphor,” says Brad Skow, an associate professor of philosophy at MIT. “They say time flows like a river, or we move through time like a ship sailing through the sea.”

The subject gets more complex when we consider that in the theory of relativity, time is just one dimension of a universal fabric we call spacetime. Yes, things change and people age, but relativity implies that points in time are locationally different, in some sense, rather than whizzing past us and vanishing from the universe forever.

In philosophy, this view is called the “block universe” theory of time. Over the last several years, after spending a lot of time thinking about time, Skow has come to regard the block universe concept as the best way we have of describing time’s essence.

Of course, that creates a tension with the way we experience time, with a past, an ever-changing present we inhabit, and a future. In philosophical terms, one position according to which the present is special is known as the “moving spotlight” theory, which holds that the property of being present moves over time. Yet even this theory falters, Skow believes.

“I think that the moving spotlight is metaphysically extravagant,” Skow explains. “It’s got this extra mysterious thing — ‘objective presentness’ — that moves around. I wouldn’t want to believe in that unless I saw good arguments for it.”

Many of Skow’s writings have examined the contours of the moving spotlight theory to see if it can hold up to scrutiny; unsatisfied that it can, he has become a proponent of the block universe theory. Skow has now published widely in his field, having produced many journal articles as well as a book, “Objective Becoming,” due for release in January by Oxford University Press. For his research and teaching, Skow was awarded tenure at MIT earlier this year.

Straight out of SLO

Skow grew up in San Luis Obispo, a small city in the hills of central California, close to the ocean. “It’s beautiful, it’s near the beach, the weather is perfect, it’s got this neat downtown,” Skow says. “There’s a beautiful farmers’ market with all this incredibly good produce.”

Nevertheless, Skow headed off to Oberlin College for his undergraduate studies, and soon declared an English major. As it happens, one semester Skow decided to take a philosophy course in existentialism, since it overlapped with some of his literary interests. However, the existentialism course required that students take at least one other philosophy class first.

“I took a philosophy class, and then I started taking more philosophy classes,” Skow says. Before long, he had become a double major, in English and philosophy. “I actually never ended up taking the existentialism class,” Skow recalls.

As is so often the case with successful scholars, some direct encouragement from a professor helped give Skow a needed dose of confidence. “I had a philosophy professor who told me I was good at philosophy,” Skow says, referring to Daniel Merrill, now an emeritus professor at Oberlin.

Before long, Skow landed in the graduate program in philosophy at New York University, where he started “procrastinating” about finding a dissertation topic. In his case, that didn’t mean wandering the streets of Greenwich Village — but rather, diving into relativity theory, for fun. Eventually Skow’s advisor encouraged him to take up the topic as his thesis.

“It turns out I had been pursuing this project in the philosophy of time but I didn’t know it,” says Skow, whose dissertation was on the philosophical implications of spacetime.

As a newly minted PhD, Skow taught for two years as an assistant professor at the University of Massachusetts at Amherst — “I loved it there” — but soon had the chance to move to MIT.

“Everyone on the faculty here was one of my favorite philosophers,” Skow says. “It was too good an opportunity to turn down.”

In seven years at MIT, Skow has also busied himself teaching, frequently offering introductory undergraduate courses on the philosophy of science, where he dives into other topics that are as tough as time — such as the status of scientific laws, or the relationship between philosophy and quantum mechanics. Besides philosophy students, Skow’s classes attract many physics and mathematics majors.

“They know a lot of quantum mechanics,” Skow notes, adding that his students “tend to be very curious about questions they don’t have time for” in their science classes.

As a tenured professor, Skow says, he would like to build more bridges to the sciences, to produce additional intellectual crossover running in both directions — so that scientists engage in philosophical thought, and philosophers ground arguments in science when appropriate.

“I think it’s as important for philosophers to know some physics as it is for them to know some [formal] logic,” Skow says. “Maybe more important.”

That certainly bears on Skow’s research into time: The essential equations of physics, as is well known, make no reference to the objective passage of time. And because science does not regard time as a moving part, as it were, thinkers such as Skow find it more compelling to join the block universe camp in the philosophy debates, rather than the moving spotlight side of things.

“Contemporary physics doesn’t need to use the objective passage of time to explain anything,” Skow says. Still, we all need philosophers to examine the rest of time’s intricacies.